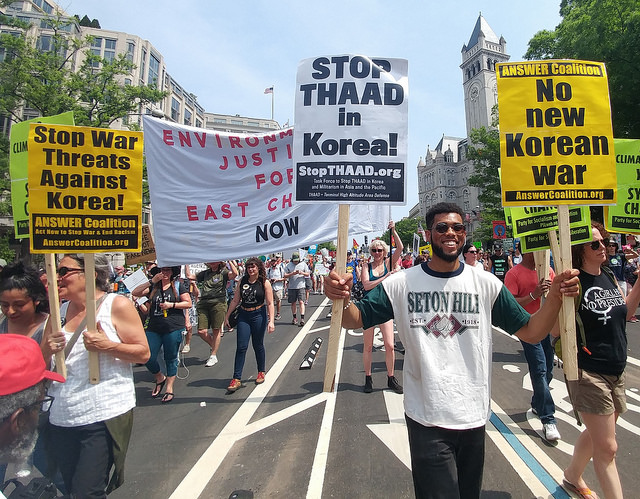 The truth: Every year, the United States carries out massive “Foal Eagle” and “Key Resolve” military exercises alongside South Korean forces that simulate the invasion of the North. Labelled “war games” by the corporate media, these drills are understood for what they are by North Korea (also known as the Democratic People’s Republic of Korea or DPRK): a menacing reminder that the United States could launch a war and destroy their country at any moment. This year, the U.S. military went even further and held a nuclear bombing drill, where a U.S. strategic bomber flew right up to the border between North and South Korea as practice for a possible nuclear attack on the North.

Unlike the United States, North Korea has never launched a war of aggression against any country. The United States claims that North Korea invaded South Korea in 1950, five years after the division of the country at the end of World War II. This was a civil war inside of Korea similar to the civil war that was waged between North Vietnam and South Vietnam, which was also divided by “great powers” at the end of World War II. The U.S. military is by far the largest and most powerful in human history, but the North Korean military’s budget is smaller than the New York Police Department’s. The notion that the DPRK is threatening the superpower United States is outrageous.

Lie #2: North Korea is a “rogue state” led by a madman who clings to nuclear weapons and refuses to negotiate

The truth: The DPRK suspended its nuclear weapons program in the 1990s as a direct consequence of a negotiated agreement with the United States. The United States failed to live up to its side of the agreement to provide substitute energy sources to replace North Korea’s nuclear power program. The United States expected that the North Korean government would collapse following the implosion of its socialist allies in the USSR and elsewhere. The DPRK ultimately decided to leave the Nuclear Non-Proliferation Treaty (NPT) only after George W. Bush in January 2002 declared North Korea, Iran and Iraq an “Axis of Evil” while the United States prepared to carry out an invasion of Iraq -- which it did in the next 15 months.

It was under those circumstances that the DPRK decided to resume its nuclear weapons program. The DPRK cites the example of what the United States and its allies did both in Iraq and in the bombing of Libya in 2011, and the overthrow of both governments as absolute proof that it is folly for a targeted government to disarm itself in the face of the Pentagon war machine.

The DPRK is acting rationally and in self-defense. Although you would never know it from the U.S. media, the DPRK has offered to suspend its nuclear weapons program and missile tests in exchange for a suspension or moratorium of U.S. war exercises that simulate an invasion and destruction of the country. The United States, under both Obama and Trump, has immediately refused this offer and continues the propaganda that the DPRK is the “provocateur.”

Lie #3: The Korean War has been over for more than 60 years

The truth: The United States is technically still at war against the DPRK. In 1953, the United States and the DPRK signed an armistice agreement -- not a peace treaty. This is essentially a long-term ceasefire that leaves the two sides technically still at war. A core demand shared by both anti-war activists the world over and North Korea is for a peace treaty, but the U.S. government stubbornly refuses. Instead, it maintains a standing force of about 30,000 soldiers in the South.

The last time the United States was invaded by a foreign power was the War of 1812, but for Koreans the memory of war is very fresh. During the Korean War, approximately 4 to 5 million Korean people lost their lives, and the North was entirely leveled. U.S. bomber pilots complained that there were simply no structures left to strike. The North had to be completely rebuilt from scratch after the end of the war.