Gaza today: Not “deadly clashes” but a massacre 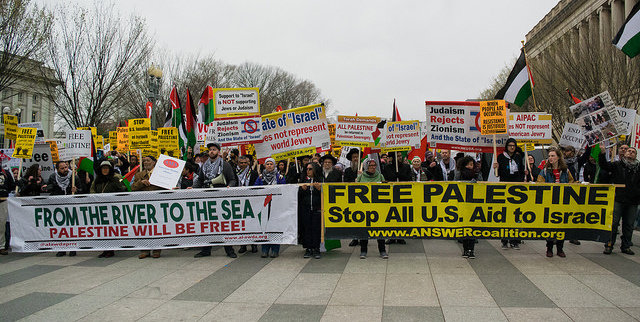 At least 52 Palestinians were killed by the Israeli army today, and thousands more wounded, many suffering critical or life-changing injuries. While the corporate media headlined “deadly clashes” or “violent protests,” the reality is that the Israeli occupiers committed another massacre. In a series of protests beginning on Land Day, March 30, more than 100 Palestinians have been killed and many thousands wounded, most by rifle fire.

Israeli forces have reported no deaths or injuries. That is because the Palestinians in Gaza are fenced-off inside the world’s largest open-air prison, and are being shot down and gassed from afar.

Tens of thousands of Palestinians in Gaza and thousands more in the West Bank and inside the 1948 borders of Israel were protesting the official ceremony marking the moving of the U.S. embassy in Israel to Jerusalem another attack by the Trump regime on Palestinian rights. Outside the ceremony, hundreds of Palestinian and Jewish protestors, including  Ahmad Tibi and Aida Touma-Sliman, Palestinian members of the Israeli parliament, were beaten and arrested for daring to raise the Palestinian flag. At the same time, demonstrators from the U.S. supporting the embassy move were allowed to carry American flags.

While Trump pretends his support for Israel is based on sympathy with Jewish people, that pretense was demolished by his choice of the notorious anti-Semite, Islamophobe and all-around bigot, Rev. Robert Jeffress to open the embassy celebration with a prayer. Jeffress once proclaimed that “all Jews will go to hell.”

May 15 marks the 70th anniversary of al-Nakba, the date which commemorates the expulsion by means of massacre and terror of 750,000 Palestinians to clear the way for the creation of the colonial, racist state of Israel.  Mass demonstrations are expected in Palestine, and in many other countries including the U.S.

May 15 is commemorated by Palestinians and their supporters around the world as Nakba Day – Arabic for "the catastrophe." Nakba Day marks the massive forced displacement of hundreds of thousands of Palestinians to make way for the creation of the state of Israel.

Below is a listing of just some of the events taking place across the country in solidarity with the Palestinian struggle for justice and liberation. You can find more events through this Facebook search (you must be logged in).

Commemorating the 70th Anniversary of the Nakba in Palestine
Sunday, May 20
4:00 p.m.
The City School (614 Columbia Road)
RSVP on Facebook