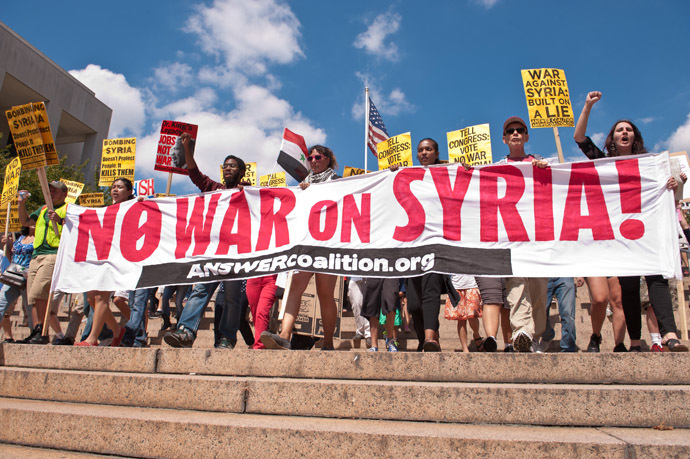 In what is now a rite of passage for a new U.S. President, Joe Biden ordered a military assault on Syria on February 25, just over a month after assuming the presidency. U.S. missiles struck Syrian facilities in Boukamal, just over the Iraqi border. Reports indicate that anywhere from five to 22 people were killed in the assault.

The Pentagon and mainstream media allege the strikes targeted “Iranian-backed militias” in Syria in retaliation for a rocket attack against U.S. occupation forces in Iraq earlier in the month. The U.S. government and corporate owned media routinely use the same deceptive branding when it targets Syrians who want to oust the U.S. from the illegal occupation of their country.

The Pentagon’s Spokesman John Kirby said the attack signals that “President Biden will act to protect American and coalition personnel.” The idea that the U.S. can bomb Syria -- a sovereign country -- in self-defense while it occupies the country as well as neighboring Iraq flies in the face of all logic. Yet it is the same justification the Trump administration used for its January 4, 2020 assassination of Iranian General Qasem Soleimani when he landed at Baghdad International Airport on a mission to ease tensions in the region.

The real message the United States is trying to send is that the people of the Middle East must sit idly by while it occupies and wages endless war against their homelands, and that Biden will -- like his predecessors -- defend U.S. imperialist interests in the region. This includes continuing the campaign of military action against Iran, Iraq, Syria, and any country that dares to stand in the way of the Pentagon war makers.

The only path to peace is the immediate and unconditional withdrawal of all U.S. troops from the region. U.S. troops out NOW!