ANSWER speaks out against U.S. bombing of Syria 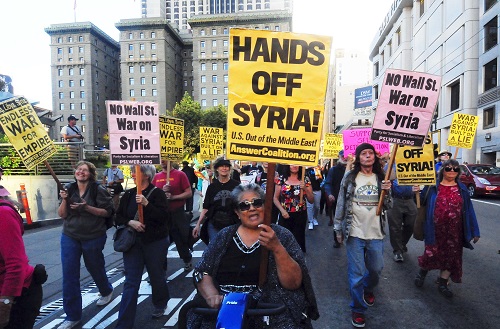 People have been taking to the streets across the United States for over a year to oppose a new war in Syria. The above photo was taken at a demonstration on Aug. 30, 2013

The U.S. bombing of Syria has begun tonight.

We in the ANSWER Coalition oppose this war and are calling for demonstrations to oppose the bombing of Syria and Iraq. This war, like the earlier ones, is being sold on the basis of misinformation and fear. The United States is a major part of the problem and cannot be the solution to the current crisis in Syria and Iraq.

This new aggression is loaded with irony. The Pentagon spokesperson says that the bombing is directed against the self-named Islamic State (ISIS) forces that have gained control over large swaths of Syria and Iraq. But it was precisely the arms transfers and funding of ISIS by the U.S. government's principal allies in the region, especially Saudi Arabia, Turkey and Qatar, that have allowed the Islamic state to grow strong in its struggle to topple the secular Syrian government led by Bashar Al-Assad.

Let's tell the fundamental truth that the Obama administration conceals from the people: the so-called Islamic State or ISIS wouldn't exist today as a major force either in Syria or Iraq if it wasn't for the U.S. military aggression that smashed the secular, nationalist governments in Iraq in 2003 and Libya in 2011, followed by the U.S. government's catastrophic support for the armed opposition against the similarly organized government in Syria.

The U.S. bombing of Syrian territory is taking place without the consent of the Syrian government. It is one more U.S. violation of international law and Syrian sovereignty. The Syrian government had offered to cooperate with the United States in a joint military struggle against the reactionary forces of ISIS. That offer has, however, been immediately and categorically rejected by all in the U.S. ruling class political circles who have already announced that the Syrian government must be destroyed. Obama and the Pentagon and the CIA and, last and least, the bribed and corrupted talking heads in Congress are determined to use the attack against the Islamic State as a pretext to carry out regime change in Syria by military means even though the Syrian government has been the most effective military force in struggling against the so-called Islamic State.

The real objectives of U.S. imperialism are to locate permanent Pentagon military bases in Iraq, Syria and the entire resource-rich region of the Middle East. This is the goal: the projection of permanent imperial power and domination in a region that contains two-thirds of the world’s oil reserves.

For the past 24 years, the United States has relentlessly bombed Iraq and now it is bombing Syria. Neither Iraq nor Syria has ever attacked the United States or its people. This enduring war against previously colonized peoples is justified with shifting and changing rationales. But it is illegal. It is an expression of modern-day imperialism. It is causing chaos and destruction in the targeted countries. And ultimately it will fail to satisfy its objectives because it is based on the fantasies of those who have become drunk on that now-familiar toxic combination of unbridled arrogance and military power.

The majority of people of the United States oppose this endless war in Iraq and now Syria. It is not in their interest. At any moment this or that poll will announce that the American people favor military action of some sort. This is paper-thin propaganda. If the country and its people were actually threatened, the Commander in Chief would not have to go on national TV and promise the people that this war will involve “no boots on the ground.” There is no clearer indication that the motivation for the new imperial war is not just flimsy but false.