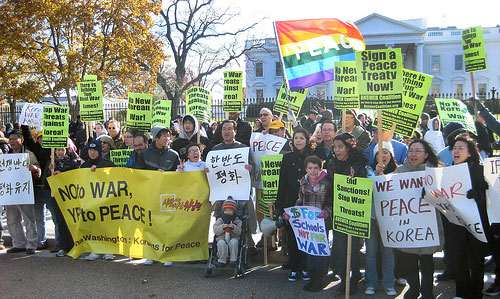 The United States invaded Korea 68 years ago in what is known as the Korean War. Over 4 million Koreans died who would not have died had it not been for the war. The United States introduced nuclear weapons into the Korean peninsula starting in 1958, and in 2002 George W. Bush's Nuclear Posture Review stipulated that the United States considered North Korea to be eligible for a first-strike nuclear attack. The DPRK left the Nuclear Non-proliferation Treaty (NPT), which was its legal right, and began developing nuclear weapons. Now they have them. The people and governments of South Korea and North Korea want to end the Korean War once and for all. That requires the U.S. government to agree to this just demand.

Donald Trump's decision to accept the invitation, delivered by South Korean envoys to the White House, to meet with North Korean leader Kim Jong-un is being derided and attacked by the U.S. imperial and foreign policy establishment and media. The military-industrial complex wants the Korean War to go on forever.

We are standing up to say: End the Korean war! End sanctions that are designed to create a famine in the DPRK! Sign a peace treaty between the United States and North Korea!

Contrary to the corporate media narrative, North Korea did not develop nuclear weapons in order to menace the United States and its allies. The DPRK's nuclear program is strictly defensive in nature, and was completed only after the U.S. government failed to live up to its end of the 1994 General Framework Agreement and the Bush administration declared that North Korea was part of the "Axis of Evil." The sanctions aimed at starving the North Korean people into submission should be immediately lifted. If the U.S. government is serious about denuclearization, it should start by dismantling its own nuclear arsenal that is vastly larger than the DPRK's and the only one to ever be deployed in combat.

The ANSWER Coalition will continue its work demanding that the U.S. government cease all its aggressive activities in Korea, which would mean signing a peace treaty, ending all sanctions and withdrawing the nearly 30,000 soldiers it has stationed in South Korea. The April 14 anti-war demonstration in Washington, D.C., will be an important opportunity to keep up this fight. All progressive people should remain vigilant to push back against any attempts to derail this breakthrough for negotiations and peace in Korea.