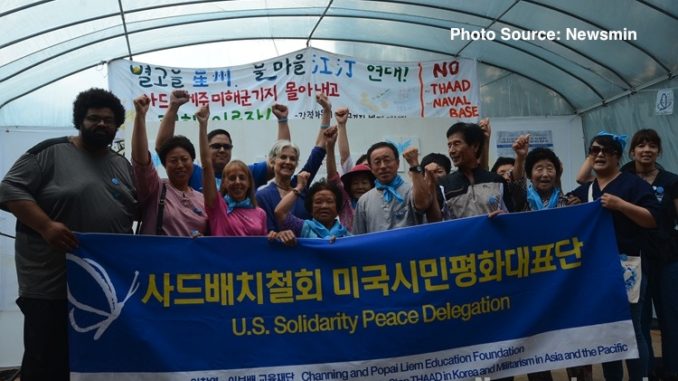 The Solidarity Peace Delegation, concluding their July 23-28 visit to South Korea, calls for immediate U.S.-South Korean action to de-escalate growing military tensions on the Korean Peninsula. The delegation was composed of Medea Benjamin of CODEPINK, Reece Chenault of US Labor Against the War, Will Griffin of Veterans for Peace, and recent Green Party presidential candidate Jill Stein. It was sponsored by The Channing and Popai Liem Education Foundation and the Task Force to Stop THAAD in Korea and Militarism in Asia and the Pacific (STIK).

The delegation issued the following statement:

The Korean Peninsula is rapidly approaching the boiling point. On the last day of our visit, July 28, North Korea conducted a missile test, and the U.S. and South Korean governments launched another set of warning missiles. South Korean President Moon announced he would allow the United States to deploy four additional launchers to complete the controversial THAAD anti-missile system unit, reversing his previous position. In light of these escalations and the likelihood of more aggressive measures, urgent actions are needed in order to de-escalate tensions.

North Korea has repeatedly offered to suspend its nuclear weapons development in exchange for a freeze in U.S.-South Korean joint war exercises. It’s time for the United States and South Korea to respond to this offer as a jumping off point for definitive negotiations towards a peaceful, sovereign, nuclear-free Korean peninsula, free from the conflicts of competing global powers that have been so harmful to the region.

North and South Korea have lived in a perpetual wartime mobilization for decades, with the presence in the South of 83 U.S. bases and nearly 30,000 U.S. troops. Provocations are being made with increasing frequency by both North Korea and the United States. Each time North Korea conducts an additional nuclear or missile test, the potential severity of hostilities escalates, and the more difficult it becomes to defuse tensions and avert the outbreak of conflict on the Peninsula.

Given the proximity of North Korea to Seoul, a metropolitan area of 25 million people, any outbreak of hostilities would be devastating. In a North Korean attack with conventional weapons, it’s estimated that 64,000 South Koreans would be killed in the first day alone. Even a limited exchange using nuclear weapons risks causing “nuclear winter,” a disruption of the climate due to the reduction of sunlight from airborne dust and debris. This, in turn, could drastically reduce global agricultural production, leading to worldwide famine and hundreds of millions of deaths.

Since Seoul would be caught in the crossfire of any hostilities, it is essential that the conflict be handled through diplomacy. The sooner diplomatic action is launched, the more likely it will succeed.

Therefore, we call for immediate diplomatic action to reduce threats that push North Korea towards the development of nuclear weapons. Foremost among these threats are the U.S.-South Korean joint war exercises against North Korea, which include dropping mock nuclear bombs on North Korea. In addition, the United States has long held a “ nuclear first strike” policy towards North Korea. This frightening threat of a pre-emptive U.S. nuclear attack gives North Korea good reason to want a nuclear arsenal as the sole means for deterring such an attack.

Fortunately, tensions can be defused through actions that are diplomatic, strategic, just and long overdue.

Specifically, the Peace Delegation calls for the following actions:

Delegates also call for more peace delegations so that the U.S. peace movement can build stronger solidarity with their counterparts in the South, and learn firsthand about the negative consequences of U.S. military bases on Korean soil.

In the coming weeks, the coalition will help launch a campaign to mobilize citizen pressure for a peaceful resolution of the volatile conflict on the Korean peninsula.

PLUS - See additional updates from the delegation: