Join a broad coalition of anti-war forces on March 16th in Washington, D.C.

John Bolton, Donald Trump's National Security Advisor, has issued a challenge to all people in the United States who oppose war and imperialism. On CNN, Bolton said, "In this administration, we're not afraid to use the phrase 'Monroe Doctrine.'"

Bolton made the comment in response to a question about why the U.S. government supports dictatorial regimes worldwide such as Saudi Arabia, if it claims to be defending democracy in Venezuela. Bolton stated that because Venezuela is in "our hemisphere," U.S. presidents have the right to impose changes on its government and to target countries in the region for regime change.

His arrogant statements caused little outrage in the corporate-owned media, which apparently found them generally acceptable, even if somewhat impolite.

What is the Monroe Doctrine?

Initially announced in 1823 as a rhetorical statement against European colonialism in the Western hemisphere, by the turn of the 20th century the Monroe Doctrine had become the operational doctrine for aggressive U.S. expansionism and imperialism. It was invoked to wage war against Spain and supplant it as the colonial power over Puerto Rico and Cuba.

Theodore Roosevelt added his "corollary" to the doctrine, which said that the U.S. had "international police power" in Latin America and the Caribbean, including the right to intervene to "stabilize" countries as it saw fit and where it deemed there was "flagrant and chronic wrongdoing by a Latin American Nation."

This opened up a decades-long period of aggressive U.S. interventionism marked by coups, invasions, and the seizure of assets and resources in practically every country in Latin America. As a matter of policy, the U.S. used "dollar diplomacy" to gain commercial and financial control, and backed this up with the "big stick" — namely the threat of invasion from the U.S. Navy — for those governments that did not comply to its terms.

During this period, countries that remained connected to European competitors were the first to be targeted. All of Haiti's gold reserves were seized in 1914 and exported back to New York, and the country was occupied for 20 years in the face of an anti-American revolt. Nicaragua was attacked twice and put under military occupation from the Marines. The Dominican Republic was occupied for eight years. A war was fomented between Panama and Colombia. The U.S. intervened repeatedly to curtail Mexico's Revolution. In Honduras, U.S. troops invaded seven times in a 22-year period to protect Fruit Company interests.

That is the real legacy of the Monroe Doctrine: generations of theft without compensation, murder without punishment, naked imperialism, and the subjugation of a continent. Successive administrations, Democrat and Republican, have sought to impose U.S. hegemony in Latin America. But in shamelessly re-invoking the Monroe Doctrine, the Trump administration has laid bare what U.S. foreign policy is in Latin America is: just a repackaged colonialism.

Who will stop this latest example of the Monroe Doctrine?

The plot on Venezuela being engineered by Trump, Pence, Bolton, Pompeo and Elliot Abrams has been loudly supported by the Democratic elite, who on other days pretend to be "the resistance." It is clear that the Washington political class has no interest in stopping their designs. The real resistance will come from people of conscience in this country who will say: not in our name! Against the Monroe Doctrine, we will invoke our own foreign policy doctrine based on solidarity and peace with Latin America and the Caribbean.

All those who believe we must resist U.S. imperialism in Latin America have an opportunity to march together on the White House on March 16th, to say with one united voice: Hands Off Venezuela! Down with the Monroe Doctrine!

(People are signed up from dozens of cities to come to D.C. on the 16th, while many more need subsidies to get on the bus. If you can help out and make a contribution, please make a donation here. Thank you.) 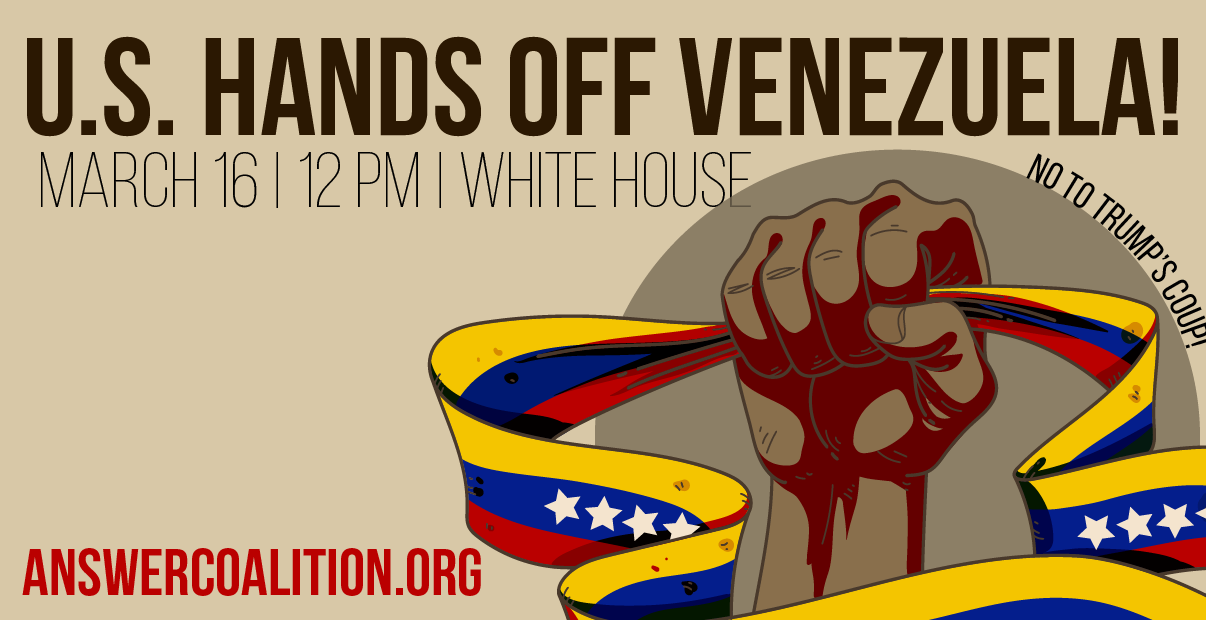