The following article was originally circulated by the Cuba and Venezuela Solidarity Committee, which was initiated by the National Committee to Free the Cuban Five and the ANSWER Coalition, on Nov. 19, 2017. 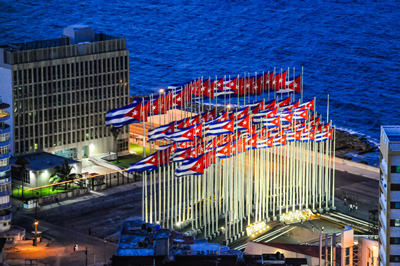 Since early 2017, the U.S. Government has alleged that U.S. diplomats and family members stationed in Havana have been physically harmed by acoustic attacks aimed at the U.S. embassy and other locations.

Yet, U.S. authorities have refused to cooperate with some 2,000 Cuban researchers who engaged in intensive investigation of the alleged incidents.

Politicizing the alleged incident, the Trump administration on Oct. 2 ordered the expulsion of 15 Cuban diplomats from Washington, and reduced its U.S. embassy staff to a minimum in Havana.

On Nov. 15 and 16, more than 300 presentations of Cuban and international experts divulged their scientific findings of the investigation, in an on-line forum accessible internationally, and concluded that:

This unfounded accusation by the Trump government is a thinly-veiled pretext for dashing U.S.-Cuba diplomatic relations and to justify the continued U.S. blockade against Cuba. Polls show that 73% of U.S. people favor the lifting of the blockade and travel ban. Two important videos give more detail on the research and findings.

The well-documented 34-min. Cuba video below is a thorough refutation of the sensationalist accusations by Washington. (Spanish/English subtitles)

The 4.5 min. video below features Richard Stone, the International News Editor at Science Magazine, explaining that no sonic weapon could explain the variety of symptoms reported. (English/Spanish subtitles)

The above article was originally circulated by the Cuba and Venezuela Solidarity Committee, which was initiated by the National Committee to Free the Cuban Five and the ANSWER Coalition, on Nov. 19, 2017.