Demonstrators hit the streets to protest fascism and white supremacy

Following the neo-Nazi rally and terrorist attack in Charlottesville, Virginia, that took the life of anti-racist protester Heather Heyer, demonstrators poured into the streets across the country to protest white supremacists and Donald Trump's public defense of them. 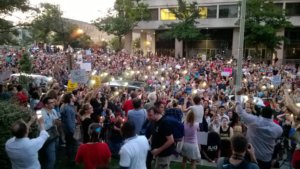 On August 13, between 5-7,000 people marched through the heart of the nation’s capital, from the White House to Judiciary Square, the site of a statute of Confederate General Pike located in downtown D.C. They expressed their solidarity with the anti-fascist resisters in Charlottesville, Virginia, honored the memory of slain anti-fascist protester Heather Heyer and pledged to continue the fight.

The hastily organized event was a candlelight vigil, anti-hate rally and militant anti-racist action. The sacrifice of Heather Heyer and the injury of 19 others when a fascist drove his car at high-speed into a crowd of anti-fascist resisters the day before took center-stage. Protesters carried posters of Heyer and copies of her final Facebook post, which read “If you’re not outraged you’re not paying attention.” Thousands of Washingtonians are paying attention now, and they are outraged. 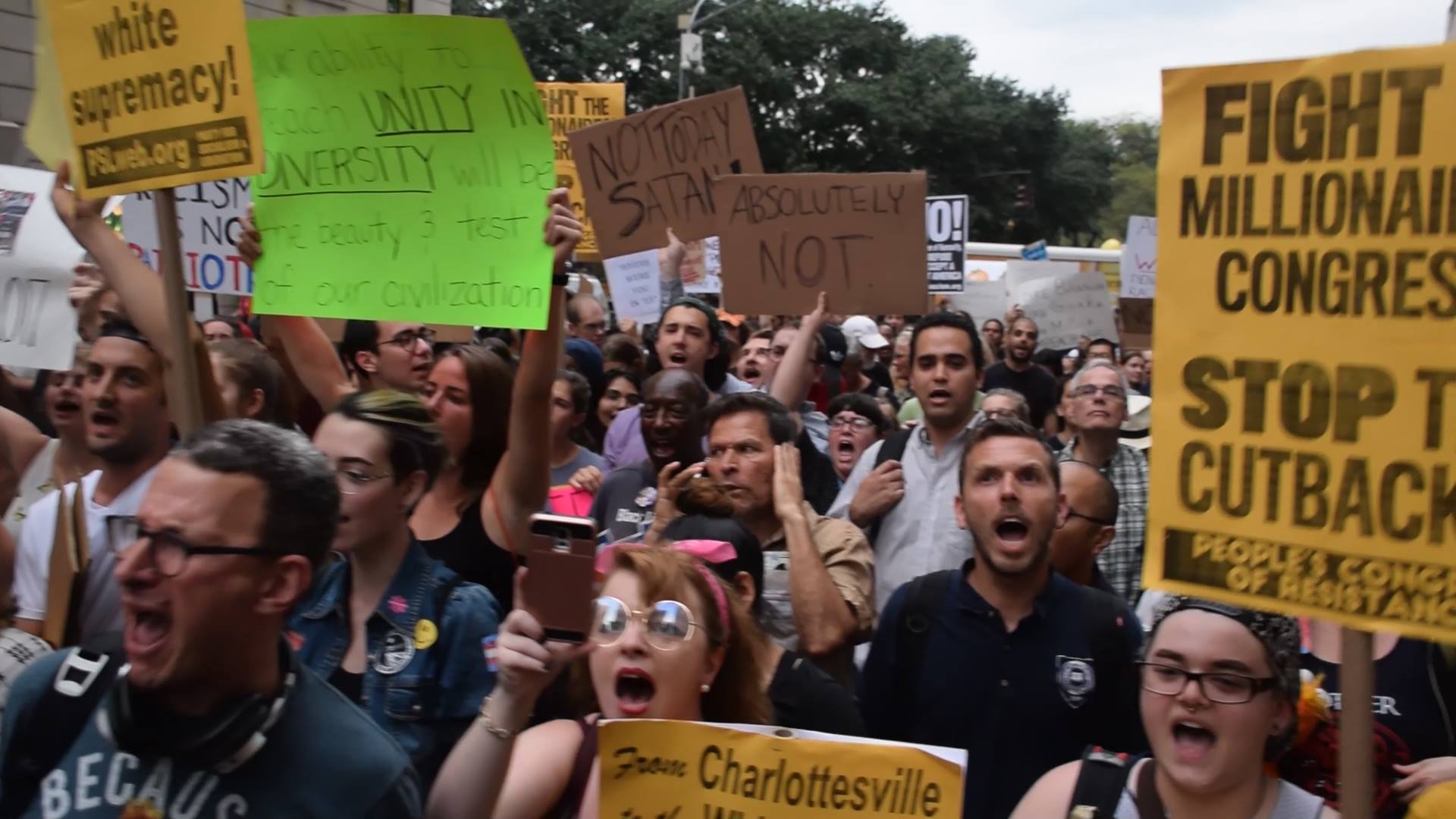 Thousands gathered near Trump Tower in midtown Manhattan on Aug. 14, ahead of President Trump’s returning home to New York that evening. The protesters stood against Trump’s bigotry and in solidarity with the victims of the white supremacist terror attack in Charlottesville, Va.

The crowd was very diverse, with both older and younger folks, people of all nationalities and genders, and encompassing a wide range of political tendencies. The protesters were unified in their incredible energy and defiant attitude in response to Trump’s bigotry and continued attacks on immigrants, women, the LGBTQ community, and people of color. 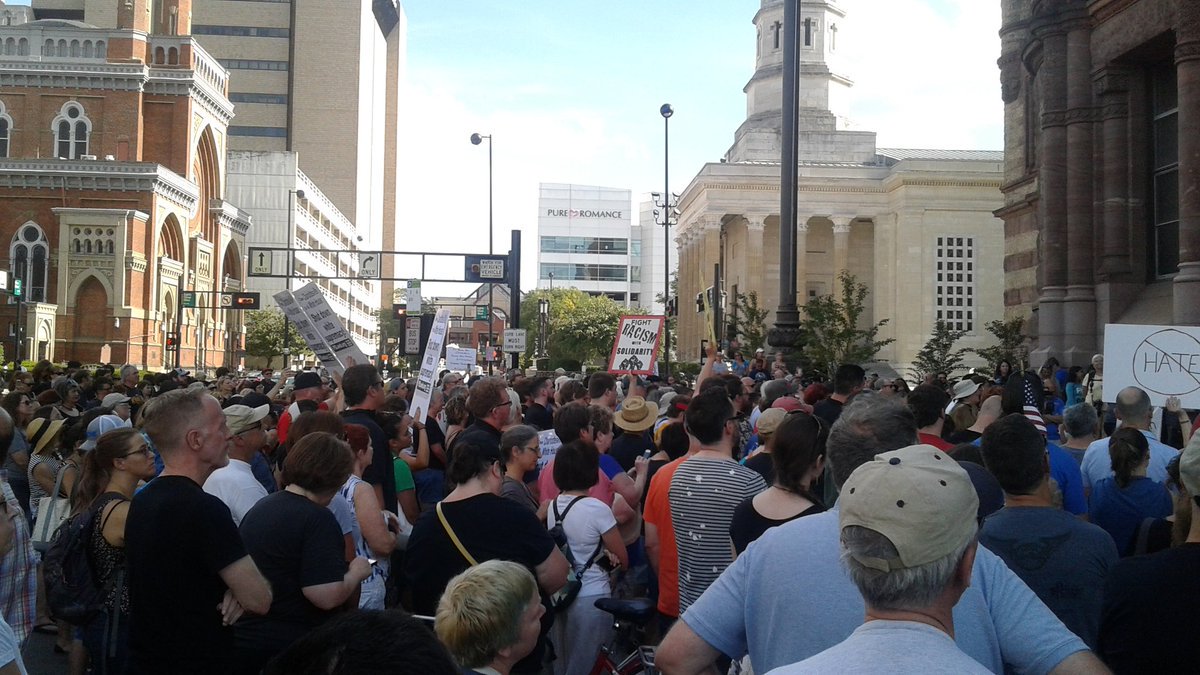 Charlottesville, Virginia, was rocked by the actions of white supremacists and fascists on August 12. Communities across the country stood up and fired back on the next day with a message that white supremacy and white nationalism will not be tolerated. Ohio was no different.

As participants in the Charlottesville “Unite the Right” rally continue to be identified, Ohio residents came to learn that several attendees are from this state, including the terrorist who murdered Heather Heyer. Several of these fascists live within an hour of the Dayton area and Dayton responded in strong fashion. 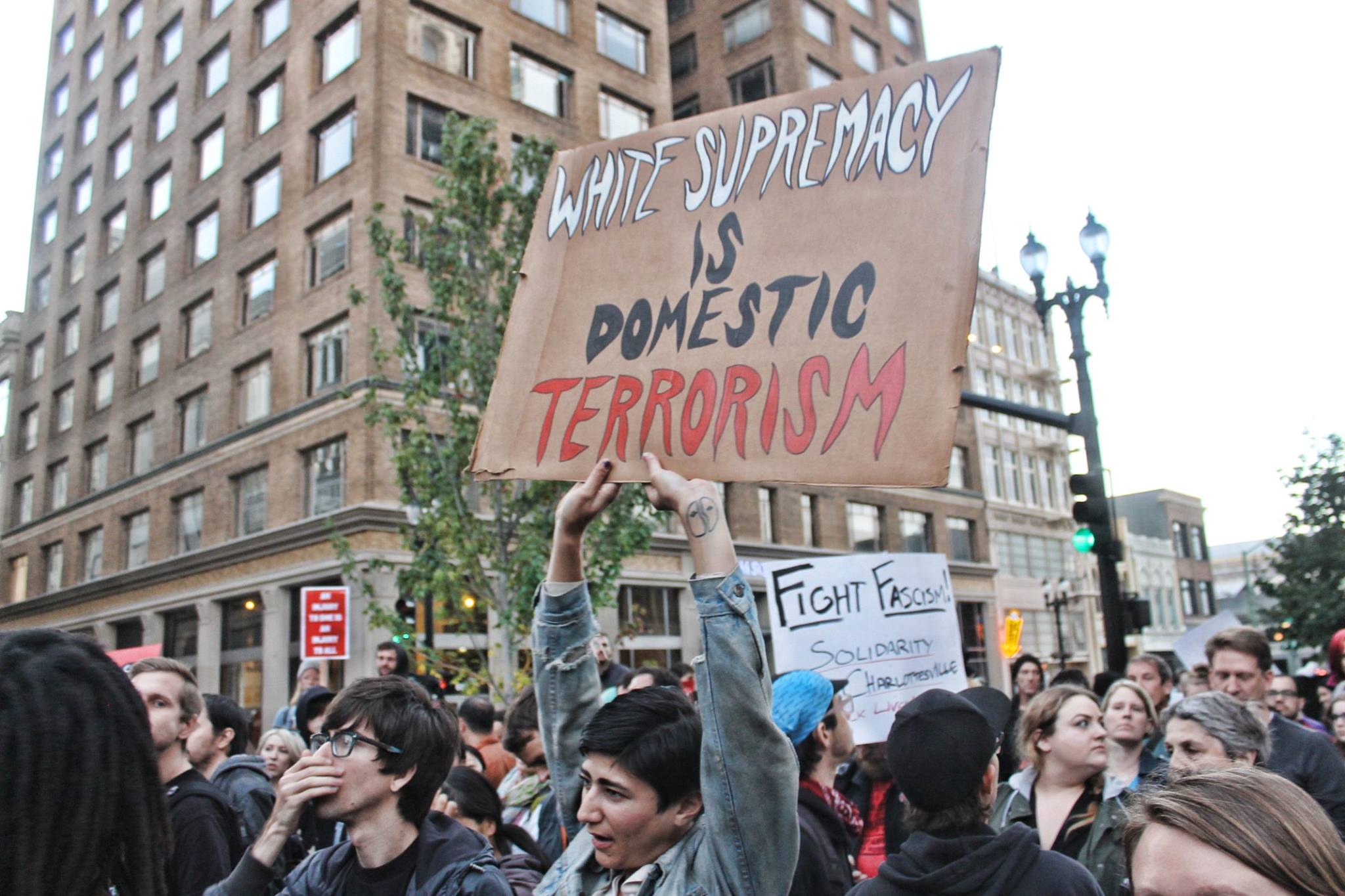 In Oakland and San Francisco, as in many other cities across the country, emergency actions were called to denounce the racist violence that had taken place earlier that day. ...

Speakers during the rally drew important links between the resurgent white-supremacist movement of today and the ongoing generations-long oppression and abuse perpetrated by the state against Black and Brown communities. They also stated the urgent need to continue showing up against these fascists, to defend the very people they want to harm. While Trump and liberals alike condemn violence on “many sides,” progressives know that standing up against these fascist forces is crucial to protecting and empowering our communities.

On the evening of August 13, over 100 people in Geneva, N.Y., gathered in Bicentennial Park to express their solidarity with the heroes and martyrs of Charlottesville. The diverse crowd in this rural city of barely 12,000 residents included working-class people, young and old, committed activists and concerned citizens, as well as community and faith leaders.

Laura Salamendra, of the Geneva Women’s Assembly, thanked people for coming together. She spoke movingly about the fact that white supremacy is not new and not confined to Charlottesville. Salamendra also introduced the evening’s speakers. These included area ministers as well as representatives from local activist groups, Tools for Social Change, #Reeds Last Term, and the We Exist Coalition of the Finger Lakes.

August 13 in Seattle, just one day after the horrific events in Charlottesville, extreme right-wing “Christians” rallied in Seattle but were vastly outnumbered by anti-fascist protesters. The Seattle Police Department spared no effort to protect a handful of extremist supporters of “Patriot Prayer,” a Vancouver, Wash., based group that has rallied in Portland and Seattle, and now plans to demonstrate in the S.F. Bay area at the end of August.

Patriot Prayer is headed up by one Joey Gibson. The group has organized rallies in Portland, one of which was attended by Jeremy Christian, the anti-Muslim racist who killed two men who were defending a Muslim teen and her friend on the Max train. Gibson was an endorser of the June 10 Islamophobic rally in Seattle that was met by thousands of protesters chanting “Say it loud, say it clear, Muslims are welcome here!” Now in the wake of Charlottesville, Gibson is trying to backtrack from his group’s connections to outright fascist elements. However, there is no backtracking from the group’s Islamophobic and anti-communist line, nor from their willingness to seek and provide “protection” to and from from elements like the Proud Boys and the Oathkeepers.