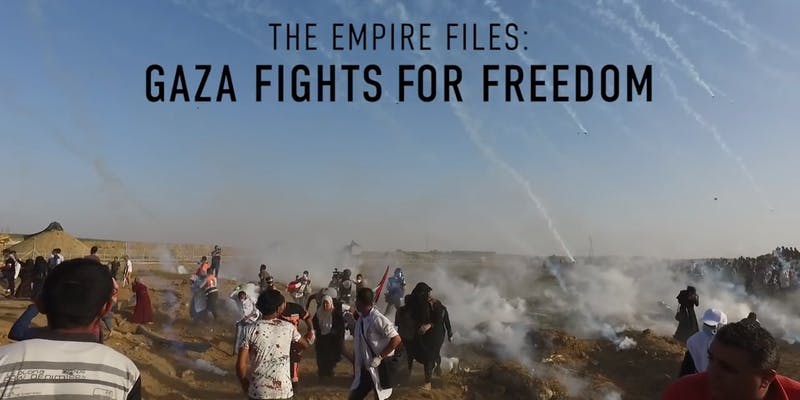 Be the first to see the new Empire Files documentary, ‘Gaza Fights For Freedom’, at its world premiere at the Downtown Independent Theater in Los Angeles!

This riveting collaboration between The Empire Files and a heroic team of Palestinian videographers in Gaza features exclusive coverage of the ‘Great March of Return’ protests, and extensive evidence—with frontline footage and victim testimony—of Israeli war crimes.

The premiere marks the one year anniversary of the killing of famed Gaza medic Razan al-Najjar by Israeli snipers (on June 1, 2018) and features never-before-seen interviews with Razan’s immediate family, medics who treated her, and victims shot down alongside her.

Following the screening will be a Q&A with the film’s creators, Abby Martin and Mike Prysner.

Join us before and after the screening for a reception. Beer, wine and non-alcoholic beverages will be served.

Purchase an official Empire Files 'Gaza Fights for Freedom' premiere EXCLUSIVE hand printed shirt with your general admissions ticket for only $20. The shirt will be available for pick up at the event. There will be a limited supply of shirts for sale at the event for $25. Preview the design here. Please note that this design does not reflect the color of the shirt or ink. That information will be posted shortly.

Sponsored by the ANSWER Coalition