Filipino activist tortured at SFO is yet another victim of the U.S. war machine 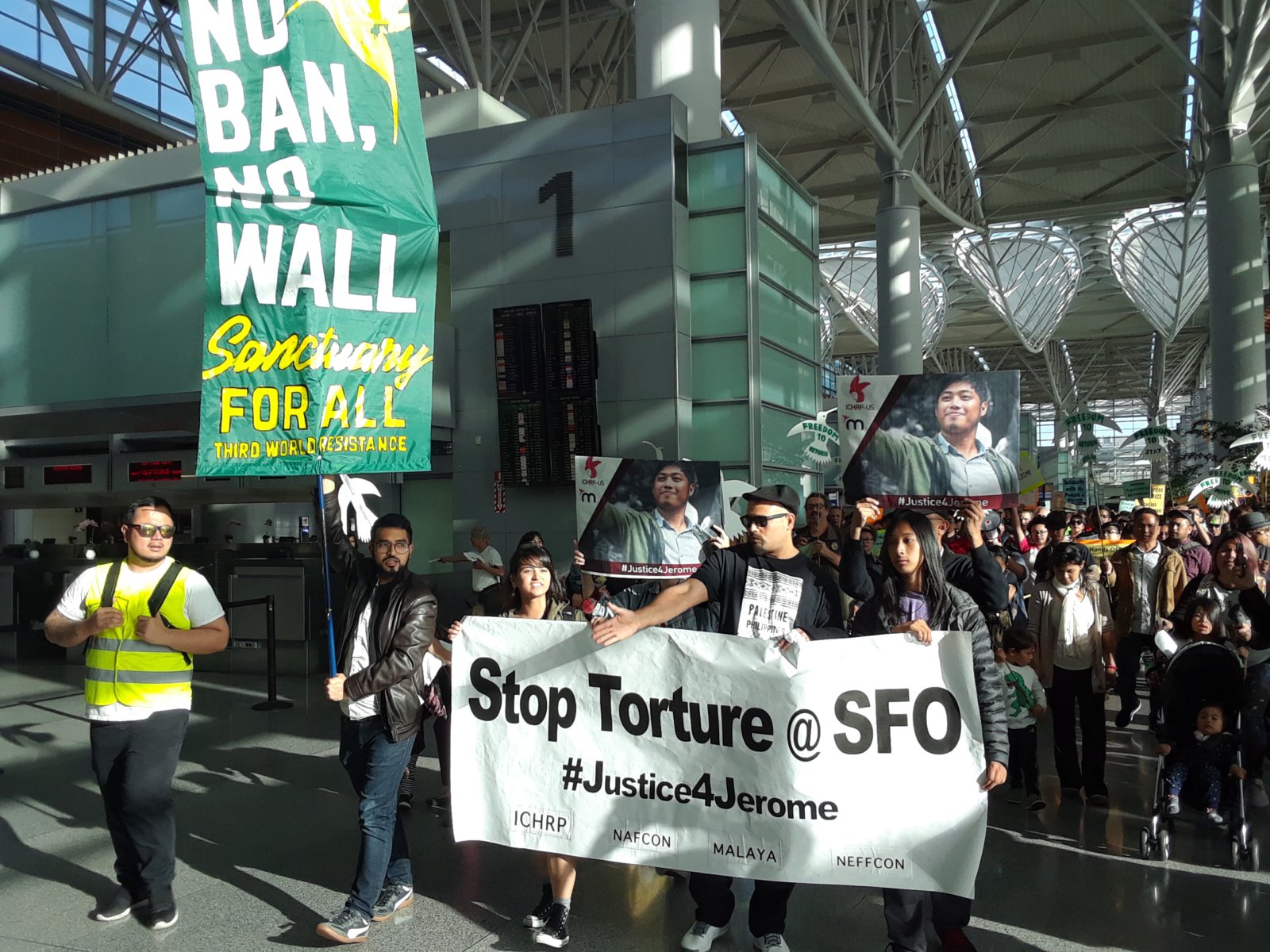 On April 23, well over a hundred protesters joined Filipino solidarity organizations in a dynamic action at San Francisco Airport’s International Terminal, demanding justice for Jerome Aba. Aba is a 25-year old Muslim and peace advocate from Mindanao, Philippines who had been invited by the International Coalition for Human Rights in the Philippines to participate in a national speaking tour.

Upon his arrival at SFO on April 17th, Aba was detained for 28 hours, during which time he reports being subjected to physical and psychological torture by agents of the U.S. Customs and Border Patrol and Homeland Security. A statement distributed from ICHRP reads in part:

“Aba described his cruel and and inhumane treatment. “In an empty room, stainless room, while they were questioning me, they commanded me to undress. Then I asserted that this is illegal, this is cruel, this is inhumane, this is a violation of human rights. Over and over they repeated, ‘you are not entitled.’ I took off my clothes. They brought in an industrial electric fan and turned it on. It was so cold. I was naked. They left me there with the fan.

"Aba continued: “I was afraid to use the restroom, because they might make a drama that I was trying to escape and they might shoot me.’ He was escorted to the restroom by 5 agents. An agent bearing the badge Lopez, told him, ‘Be good here, be nice here, if you do anything bad, I will not hesitate to shoot you.’ Every time Jerome moved, Lopez would reach for his side arm (firearm)”

Aba was extensively interrogated about his affiliations, his political beliefs, and his cultural effects. Aba was asked about his participation in rallies, views on U.S.-Phillipine relations, Martial Law in Mindinao and Duterte’s Drug War that has taken over 13,000 lives. Aba was repeatedly accused of being a “terrorist” and a “communist.” On two separate occasions he was left in a room with a gun and later a grenade, as if attempting to entrap him into using the items. After 28 hours of being detained, held incommunicado, and denied legal counsel, Jerome was deported back to the Philippines April 19th.”

Recalling the travel ban protests a year earlier that had swept airports across the country, Lara Kiswani of the Arab Resource and Organizing Center stated during the press conference, “We know that here at SFO many people are deported and interrogated for hours, but we did not know that people experience the psychological and physical torture that Jerome experienced here last week, and we did not know that San Francisco County allowed these torture chambers to stay in the City, to stay in this airport. What else don’t we know? How many other people have been tortured right here in SFO?

“…Were they afraid that more people would learn about the struggle for the Philippines and for liberation? Were they afraid that it would be exposed that the United States and the role it plays internationally makes sure that people continue to be criminalized in the way Jerome was right here in our own backyard?”

Led by chants such as, “San Francisco, did you know? Torture happens at SFO!” the demonstration moved inside, with marches leading to two separate rallying points.

Demands of the action included the arrest of the torturers, who were identified using badge names by Aba during an interview he conducted upon return to the Philippines.

Promises of a sustained fight-back set the tone of the closing rally. Adrian Bonifacio, Chairperson of Anakbayan-USA, had this to say: “I am the same age as Jerome. For many of us here, we have been living our whole lives with the U.S. at war. We grew up watching the bombings of Iraq and Afghanistan, we saw as the Zionist Israeli state continued its genocide on the Palestinians. And it wasn’t so distant from us, because eventually, that war came upon our motherland. That War on Terror came on our shores and it has stayed there ever since. It stayed there under countless counterinsurgency operations the Philippine state has done with the backing of the United States government.

“…As youth, linking arms with all of you, linking arms with the so many hundreds, and thousands, and millions of Philippine peasants, farmers, workers, Indigenous people who continue to be killed, tortured, maimed by the Philippine military with the backing of the U.S. military, who continue to be tortured not only in the Philippines, but on U.S. soil, here in this building. We know that the only answer for us is to organize and create a mass movement that will bring this system down, that will bring the DHS down, that will bring CBP down, until justice is finally ours.”