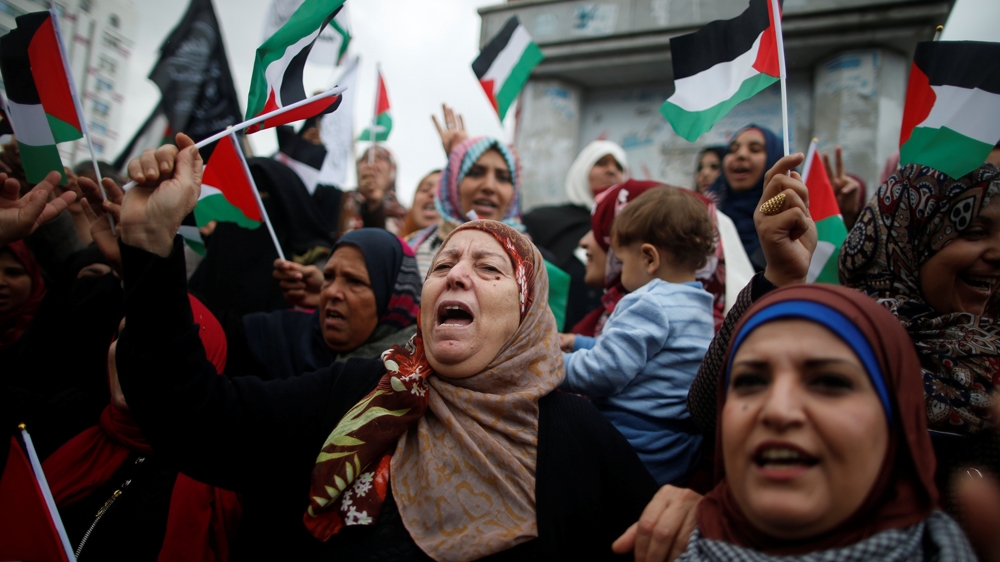 The ANSWER Coalition condemns President Trump’s announcement of his intention to move the U.S. embassy from Tel Aviv to Jerusalem/Al-Quds. On Dec. 6, Trump announced that the United States was becoming the first country to recognize Jerusalem as the capital of Israel.

Trump’s announcement, made with the support of the Republican and Democratic Party leadership in the U.S. Senate, is an outrageous attack on the rights of the oppressed Palestinian people and a gift to the racist, apartheid government of Israel, whose clear aim is to colonize all of Palestine and drive out as much of the indigenous Palestinian population as possible.

It is also a gross violation of international law and defies the many international bodies that regard the 1980 Israeli annexation of East Jerusalem as illegal. The West Bank, Gaza, Syria’s Golan Heights and East Jerusalem were conquered by Israel in the 1967 aggression known as the Six-Day War.

But, contrary to much of the coverage in the mainstream corporate media here, Trump’s announcement does not mean that Jerusalem/Al-Quds is now actually the capital of Israel.

The people of Palestine, not Trump, will determine their own national destiny, and they have united to say: Jerusalem is our capital!

Immediately following Trump's announcement, people across the West Bank and Gaza took to the streets in protest, with more than 60 wounded by the Israeli occupation forces on Dec. 7. More protests are expected in the coming days.

In Palestine and all around the world, protesters are taking to the streets!

Follow this link for a listing of demonstrations taking place in the United States, and to add one near you.