The following statement was issued by hundreds of progressive and anti-war organizations in South Korea, Japan and the United States to coincide with Donald Trump's trip to Asia. 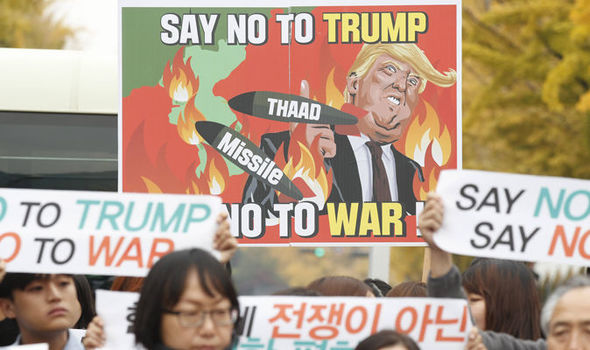 As U.S. President Trump travels to Asia, we civil society groups from the United States, South Korea, and Japan call for a diplomatic solution to the dangerous conflict between the United States and the Democratic People’s Republic of Korea (North Korea). As those who would be directly impacted by the outbreak of such a conflict, we call on our leaders to take bold steps to ensure lasting peace. Recent events have set the stage for a possible catastrophe on the Korean Peninsula and even throughout the greater Northeast Asian region. Any further escalation of tensions could rapidly degenerate into violence. In its 27 October 2017 report, the U.S. Congressional Research Service estimates that over 300,000 people would die in the opening days of a military conflict on the Korean Peninsula, even without nuclear weapons, and would ultimately claim 25 million lives.

Even as President Trump calls his predecessor’s policy of “strategic patience” on North Korea a failure, he continues the same policy, i.e., intensifying U.N. and unilateral sanctions and military threats. Meanwhile, North Korea continues to escalate the pace and scale of its nuclear and missile tests. The Abe government, seizing on the crisis in Korea, has quickened the pace of remilitarization and revision of Article 9 of its constitution. South Korean President Moon Jae-in meanwhile, despite an unambiguous mandate from the South Korean people, who ousted his hawkish predecessor in hopes of a radical transition to harmonious North-South relations, instead continues to do the bidding of the United States as he assumes a hostile posture vis-à-vis North Korea. We therefore demand that:

1. The Trump administration boldly shift to a policy of peace by:

2. The administration of President Moon Jae-in of South Korea honor the spirit of past North-South joint declarations for peace and reconciliation by:

3. The government of Japan's Prime Minister Shinzo Abe immediately cease all further moves toward military buildup and instead contribute to regional peace by:

These are among the hundreds of civil society organizations who have signed on: