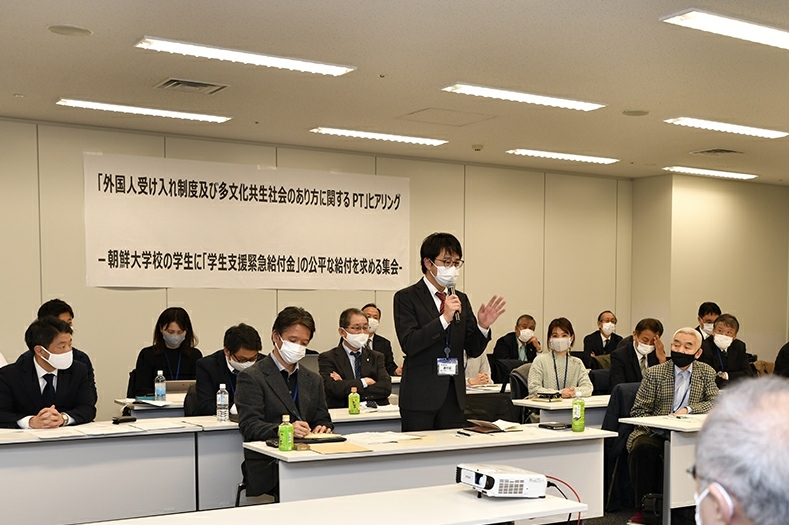 In May 2020, the Japanese government initiated the “Emergency Student Support Handout for Continuing Studies” to help mitigate financial losses as a result of the COVID-19 pandemic, which forced businesses to close.

The only students ineligible for the funds were those attending Korea University, the only university affiliated with Chongryon, a large network of Korean residents living in Japan that has, for several decades, fought against the ongoing discrimination, violence, and the general oppression of Koreans in Japan.

Ryom Munsong, Associate Professor of Faculty of Foreign Languages at Korea University, told the ANSWER Coalition that after Korea University students were excluded, Eri Tokunaga of the Constitutional Democratic Party of Japan made an inquiry to then Prime Minister Shinzo Abe at the Diet, Japan’s National Legislature. He replied that “This is a continuation of the same treatment as the previous system.” “This seems to be,” Ryom says, “the first time the Prime Minsiter mentioned our university at the Diet.”

“This means that, just as Japanese authorities have excluded Korean schools from every support system, they’re going to maintain that policy. They’ll continue to discriminate against Koreans in Japan,” he said. Although the events were published in the Japanese press, many Japanese citizens don’t recognize this as discrimination.” Because Japan doesn’t teach students its colonial history and present in its schools, many are literally unaware of the oppression faced by Koreans in Japan.

Even though the emergency program ended in March 2021, Koreans are still fighting back. They need our solidarity and support. They organized demonstrations against their exclusion, and the International Movement Against All Forms of Discrimination and Racism sent a special report to the United Nations.

Special U.N. rapporteur Tendayi Achiume and three other experts sent a leter to the Japanese government. The letter stated that, ““For minority students, this further jeopardizes their access to an education that facilitates the promotion of their national, ethnic, cultural and linguistic identities.”

The government’s response denied that it was discrimination, although the real intentions are clear with even a cursory look at its colonial history and treatment of Koreans in Japan.

This isn’t the only act of discrimination against Koreans in Japan during the pandemic. In March 2020, the Saitama city government distributed hundreds of thousands of masks to pre-schools and elder care facilities to protect students, residents, and workers. All pre-schools received masks… except for pre-schools affiliated with Chongryon. Koreans and their allies in Japan and around the world--including the ANSWER Coalition--protested their exclusion and forced the government to reverse its decision.

In response to the recent exclusion, Korea University students are sending messages to the U.N. rapporteurs. In one statement, Ha Yun Ri says

“We are also equally suffering from a COVID-19 situation. In particular, the financial burden is large. When we were Korean high school students, we were already excluded from the high school tuition-free policy. Discrimination continues even under the COVID-19 situation.Our daily lives became harder and harder under this situation.”

Korea University degrees are not recognized by the state, and Chongryon high school students must take an additional examination to qualify for university. This is because Chongryon is affiliated with the Democratic People’s Republic of Korea (DPRK, or North Korea), with many of its members holding DPRK citizenship and passports.

Japan’s colonization of Korea viciously and violently sought to deprive Koraens of their language, land, culture, traditions, and even their Korean names. They kidnapped millions of Koreans and brought them to Japan to work in slave-like conditions.

Upon liberation from Japan, the DPRK sent funds to Koreans living there to establish schools, community centers, and other institutions so they could begin reclaiming their cultural heritage, practice their customs and dancing, teach and speak their language, and their political history and present.

The ANSWER Coalition sends its solidarity to Chongryon and their students and pledges to continue to help them fight for full equality in Japan and the independent liberation of their homeland.