Marching through Hollywood: Planet and people over profits! 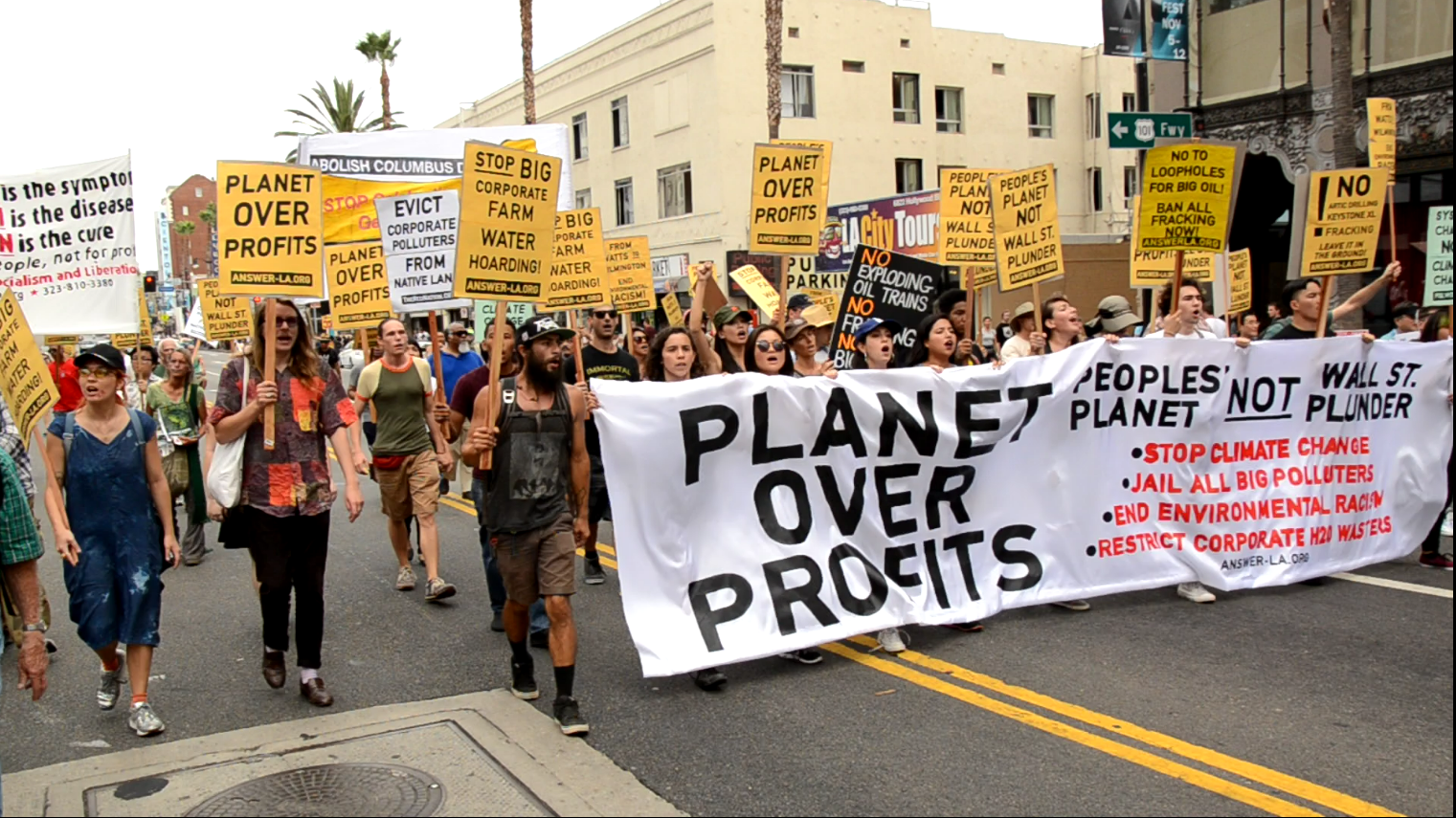 On Sept. 12, protesters marched through Hollywood to say, “Planet over profits!” The action, initiated by ANSWER Coalition, was endorsed by the Center for Biological Diversity,  SoCal 350, The Red Nation, Food & Water Watch, National Lawyers Guild, Carson Coalition, Full Rights for Immigrants Coalition, Office of the Americas, Party for Socialism and Liberation, and many others.

Protesters took aim at the series of crises taking place in California and beyond – including the Refugio oil spill, Exide’s unprecedented pollution of Latino communities in East Los Angeles, the impact of the fracking boom on California, the hoarding of water resources by corporate agribusiness through the drought, Gold King’s mine wastewater dump into the Animas River, on Navajo land, and the threat of runaway climate change. Messages about these and other recent environmental problems were carried on placards as chants rang out, “Planet – YES! Wall St. – NO! Big polluters got to go!”

Among the featured speakers at the rally was PSL presidential candidate Gloria La Riva. Speaking about the severe drought that is devastating  California, La Riva pointed out that in addition, massive water theft by agribusiness  is taking place, leaving  whole towns and communities without water. “The water” said La Riva, “should belong to all of us. It is not the private property of agribusiness and big corporations. Everyone one of us in California has a stake in this. We can and must build a big movement to stop a system where profits rule instead of the people.”

Brian Becker, National Coordinator of ANSWER Coalition told a crowd that gathered in front of the Chinese Theater at the end of the march, “The basic problem of the environment is who will control what we produce, how much we produce, and for whom it is produced. Will the corporations and the rich continue to control it and run our planet down this collision course with itself or will the people take control so that we can have a sustainable future for ourselves and for generations to come? We are here to organize and fight so that the people have that power.”

When asked what he thought was at the heart of ongoing environmental catastrophes, Hamid Assian of Food & Water Watch, explained, “We live in a society and a system predicated on its ability to infinitely exploit resources for profit that is applied to a world with finite resources. We need to build a united movement and we need to educate the public to protect our basic rights to things like water.”

The audience cheered and took heed as a contingent from The Red Nation took the stage to speak on the plight of indigenous people and their resources. Paige Murphy, a leading organizer of the group, told the crowd, “We have faced violence and the destruction of our land and resources for over 500 years and for 500 years we have resisted. We continue this fight today as we take on Gold King, a mining company that has devastated our rivers with millions of gallons of toxic waste. We will fight until they clean it up and pay reparations to our people.”

Onlookers joined the closing rally and gave their full attention from the busy sidewalks of Hollywood Boulevard as speakers continued to discuss the crisis and ways to fight back. Many pledged to continue the fight to secure a future for the planet and its resources.