Moving forward by fighting back: An open letter to our supporters and the Syracuse Police Department 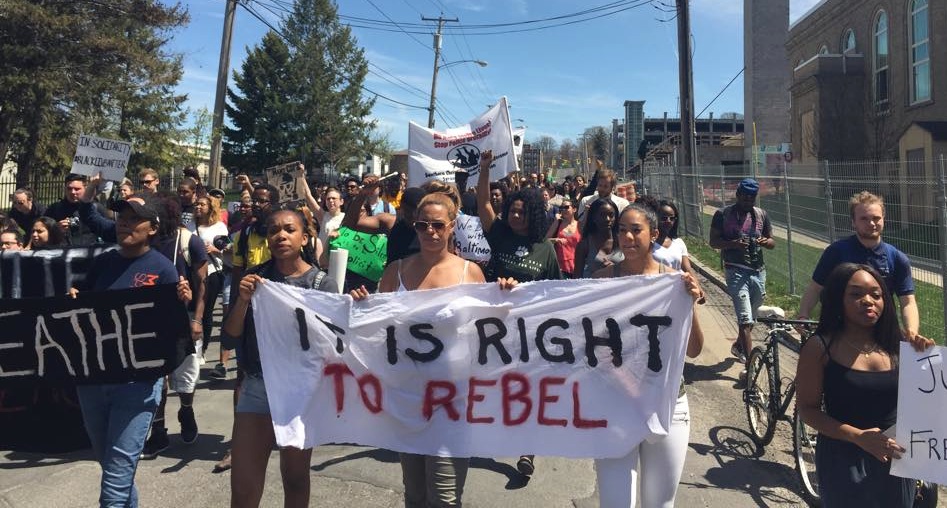 A letter from Rev. Lemorris Dexter and Derek Ford, who both recently settled a free speech case.

Over this beautiful summer the two of us have had to fight outrageous charges brought by the City of Syracuse, courtesy of Frank Fowler and the Syracuse Police Department. These charges were unveiled attempts at intimidation, not just against us, but against the growing movement in Syracuse that is fighting back against police misconduct and violence, and against those whom the police serve: the 1 percent.

Background: An inspiring and vibrant protest

The charges stemmed from a peaceful, diverse, vibrant, and militant protest and march organized by THE General Body on April 30. The protest was in solidarity with the Baltimore Uprising, which began after the callous murder of Freddie Gray by three Baltimore cops. In a city filled with story after story of this same type of brutality—waged not only against men of color but against women, transgender and queer, disabled, immigrant, and poor people of all stripes—a solidarity demonstration was quickly organized. Our two organizations, the ANSWER Coalition and Southern Christian Leadership Conference, helped sponsor the protest, although we weren’t the organizers.

The student-led action also made important connections between the racist violence of the police and the racist policies of the Syracuse University administration, which continues to cut scholarships and funding for nationally oppressed students and routinely glosses over racist micro- and macro-aggressions on campus.

We gathered on the SU quad that day and heard from several students about their experiences in this racist and capitalist society. For many of the speakers and participants it was their first protest. Many who spoke didn’t plan on it; they were compelled by increasingly dire material circumstances: police violence, institutionalized racism, sexism, and heterosexism, able-bodied supremacy, crushing student debt, unemployment, and a future of precarious, temporary work.

After the rally we—community members united with SU students, faculty, and staff—marched down the hill to State St. We started off marching on the sidewalk but ended up in the street. Once at State St. we stopped in front of the police department, jail, and criminal courthouse. Taking over the intersection, we chanted in one voice for unity and solidarity in the face of cutbacks, gentrification, and state repression. We next marched to the Jerry Rescue monument, erected—despite the wishes of the City’s elite—to commemorate the 1851 rescue of a runaway slave from the hands of the same criminal “justice” system we are fighting today.

At this point, both of us had to leave for separate reasons. Rev. Dexter had an issue with his son at school, and Derek had to teach a class in Geneva. The protest went on and people marched back to SU. Throughout the march we saw several police officers in cars and on foot. Not one approached us or asked us to get off of the street.

A cowardly act of intimidation:

It wasn’t until several weeks later—on May 29—that the two of us received a summons for violating city ordinance 16-35(b), which states that “No persons, society or organization of any name or nature shall assemble, congregate, parade or march in or through any of the streets of the city without first securing a permit.” At our arraignment on July 8 we both pled not guilty.

This is an archaic ordinance, and its nature is spelled out most clearly in the next ordinance, 16-36, which states that “All assemblies…shall have the American flag conspicuously displayed at all times… No red or black flag and no banner, ensign or sign having upon it any inscription opposed to organized government, or which is sacrilegious, or which may be derogatory to public morals, shall be displayed.”

These McCarthyite, anti-radical ordinances were intended to be used specifically against those who challenged the status quo. On the books for decades, not one court clerk, activist, journalist, or community member that we spoke with could ever recall anyone being charged with these ordinances. But it is clear that their intended use still stands.

We believe that both of us were charged with this violation not because of who we are, but because of the organizations that we represent and the movements of which our organizations are a part. The ANSWER Coalition in Syracuse has been organizing since 2010 and has consistently been one of the most active militant, principled, and uncompromising left-wing groupings in the city. A comprehensive anti-imperialist organization, police brutality and mass incarceration have been part of our organizing work since our inception. The Southern Christian Leadership Conference is more recent, forming in 2014. But since its formation it too has been one of the most active and uncompromising groupings in the community.

Our organizations began working together in August 2014, when we had a town hall speak-out against police brutality. Since that time we have held community forums, protests, and other actions on a monthly basis. Through these actions we have brought together different sections of Syracuse’s diverse community, fighting side-by-side victims of police brutality and their families.

Unlike other groups, we have not asked for a “seat at the table.” While we have fought tooth and nail for reforms, we have never seen any value in negotiating the terms of our own oppression. We don’t just speak out when someone is killed or beaten by the cops and then retreat; we stay on the offensive. We believe that this is why our organizations were targeted.

The SU student movement known collectively as THE General Body sprang into action in the fall of 2014, shortly after ANSWER and SCLC started working together. Leading a series of bold actions—including occupying the administration building for several weeks in October and November—this group gave new breath to the struggle for justice in Syracuse.

TGB was never solely a SU group (and we absolutely reject the absolute division between “students” and “the community,” as if there is no overlap between these groups), and in December of 2014 a strong bond was forged between TGB and community groups, most specifically the SCLC. When Rev. Dexter was thrown into jail for a month from charges incurred after the police beat him and his wife, members of TGB helped organize a solidarity protest outside of the jail. They consistently showed up to community events and lent their organizing experience and their passion for justice to all sorts of community struggles.

We hope that the cooperation between THE General Body and community organizations like ANSWER and SCLC continues. There are many possible reasons why no one from THE General Body faced charges after the protest: the police wanted to wait until students left to pursue the charges; the police and the SU administration may have their own protocol for such situations; the police may not be able to identify particular leaders involved in TGB (yet); or perhaps the cops realized that there are simply too many leaders in TGB to charge!

Moving forward and fighting back:

At this time the charges against us have been resolved with no jail time (although we faced up to 150 days in jail). There is no doubt that the tremendous community support that we—and our organizations—received contributed to this (relatively) favorable resolution. We want to offer our sincerest gratitude to the individuals and organizations who showed up to our court appearances, signed the petition in our defense, called the District Attorney’s office, and offered words of support and solidarity.

We also recognize that there is now a dangerous precedent set, and that the police and city aren’t afraid to use the courts to silence the growing chorus of outrage in Syracuse. We need to continue to fight against police violence, mass incarceration, and every form of oppression and exploitation. And we need to fight against attacks on our basic bourgeois-democratic rights, like the right to freely assemble.

We hope that all of our supporters not only become more deeply involved in the struggle, but that you become part of organizations in the struggle. Whether it is the ANSWER Coalition, SCLC, or TGB, we hope that you unite with like-minded people to carry the movement forward in Syracuse and beyond.