On the recent situation in Japan: Abe administration's reactionary policies and the people's movement

The following statement was released by Asia Wide Campaign (AWC) - Japan. The ANSWER Coalition is in solidarity with their struggle and will continue to build opposition inside the United States against the U.S. government's aggression and military build-up in Asia. 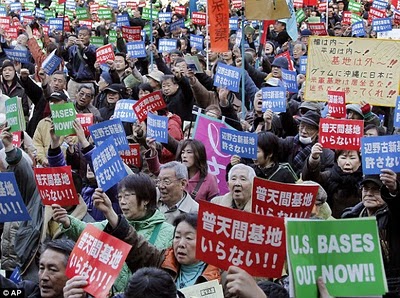 Under the right-wing, reactionary Abe administration, workers and people in Japan are facing a reactionary offensive by the government and capital in many aspects. The coming several years will become very crucial period for Japanese people's movements.

On July 1, 2014 the Abe administration made a cabinet decision to allow Japan to exercise the Collective Defense Right, which had been denied by past administrations, ignoring the large people's opposition. The purpose of this decision is to strengthen the commitment of the Japanese Self Defense Forces (SDF) toward the US-led wars of aggression, and to enable the government to dispatch the SDF overseas anytime and anywhere they need. Also, Foreign and Defense Ministers both of the US and Japan signed the re-amendment of the Guideline of the US-Japanese Defense Cooperation on April 27, 2015. This aims to develop the US-Japanese joint operation plan in response to Japan's exercising of the Collective Defense Right.

The Abe administration plans to submit a package of security-related bills to the ongoing parliament session (probably in the middle of May 2015). These bills are composed of amendments to the present 11 security-related laws and newly enacting the 'Bill for Support of International Peace', which relates to the SDF dispatch overseas. This package of bills aims to provide a legal basis of Japan's exercising of the Collective Defense Right. These maneuvers trample on Article 9 of the Japanese Constitution, which declares 'renouncement of war', 'non‐maintenance of war potential forces' and 'denial of the right of belligerency'. The Abe administration, however, wants to repeal Article 9 completely.

People's campaigns have already launched. From this spring to coming summer, struggling workers and people in Japan will repeatedly surround the parliament building in order to junk the new security bills.

Building of the new US base in Henoko, Okinawa and consolidation of the US Bases in Japan

The struggle to stop construction of the new US base on offshore Henoko, Okinawa is in a decisive phase now. Okinawan people have stopped the building of the new US Marine base since 1996, when the construction plan appeared. The Abe administration, however, intends to construct the base by force. It plans to launch the reclamation of the foreshore even on coming July 2015.

Right now, protest actions both on land and sea are held by people everyday. This struggle has become one of all Okinawan people. An anti-base candidate won an overwhelming victory in the election for Okinawa prefectural governor last December. The newly elected governor, Takeshi Onaga, is confronting the Japanese government, representing the people's opinion. He also plans to join the massive anti-base rally that will be held in Naha-city, prefectural capital of Okinawa, on May 17.

It is a very urgent agenda for people's movements in Japan to develop their commitment and support for protest action at Henoko, to organize protest actions against the US and Japanese governments and to expand solidarity work nationwide for the Okinawan people's anti-base struggle.

The US and Japanese governments have also promoted the consolidation of the US bases in Japan, including the massive reinforcement of the US Marine base in Iwakuni and newly building the US X-band radar base in Kyotango, and further integrated both military forces of the US and Japan. In these places, people also continuing to resist them.

The struggle to stop the restarts of idled reactors is also a very important and urgent agenda. The Fukushima nuclear disaster has brought about serious damage to humankind and the environment. No one can confirm clearly the real situation inside the damaged reactors until now due to a high level radiation. The continuing leaks of the contaminated water into the sea is also a big problem. Around 120,000 Fukushima people are still evacuated. In addition, seriously, thyroid cancers increase among children in Fukushima.

Japan has 50 commercial reactors now but there has been no online reactors since September 2013. In most of the cases, additional measures for safety have been required for restarts of idled reactors.

The nuclear disaster in Fukushima showed again that humankind can not coexist with nuclear energy. Most of the people in Japan oppose the reactor restarts and demand the shutdown of all nuclear power stations. The Abe administration, however, managed to restart these idled reactors in the interest of electric power monopolies. The first target of the restart is rectors in the Sendai Nuclear Power Station of Kagoshima Prefecture. The government and the Kyushu Electric Power Corporation, which manages the power station, aims to restart the reactors there within July 2015.

The Abe administration has also promoted the export of Japanese reactors to other countries. The government regards it as a key part of the 'growth strategy' on Japanese economy. At the same time, the Japanese ruling class has sought to keep Japan's own energy that enables them to carry out war and to maintain the potential ability to produce nuclear weapons. This is one of the reason why they have pursued the maintenance of reactors.

This year marks the 70th anniversary of Japan's defeat in its invasive war on Asia-Pacific. Regarding this, Prime Minister Shinzo Abe plans to release a remark on August 15. The aim of this planned remark is to deny the historical facts of Japan's aggression and colonization on the region, and to revise history.

On his speech at the summit meeting for the commemoration of the 60th anniversary of the Bandung Conference in Jakarta, Indonesia on April 22, 2015, PM Shinzo Abe looked back on history but never referred to Japan's 'aggression and colonization.' At around same time in Japan, 4 Cabinet members and 106 lawmakers visited the Yasukuni Shrine. It  had been a spiritual backbone of the Japanese Emperor's army that had carried out the war of aggression in Asia. It honors dead Japanese soldiers as 'spirits of the war dead'. The war criminals who were judged at the Tokyo Trials are also included within the shrine.

The actual phrases of the so-called 'Abe's remark' are still not clear because the US has intervened in this issue. The US is afraid of the expansion of friction among allied countries including South Korea. Regardless of what actual phrases will appear, Abe's real intention is already clear.

We have fought against the Abe administration's historical revisionism, and demanded an offical apology from the Japanese government and compensation to all victims of Japan's invasive war and colonization, including the victims of the Japanese army's sexual slavery.

The TPP and Neoliberalism

The Abe administration has also pushed the negotiation of the Transpacific Pacific Partnership (TPP) agreement. If it is concluded, Japanese farmers would suffer devastating damage and the rights of workers would be deprived.

The Abe administration's promotion of neoliberal policies has brought about the expansion of poverty and the gap between the rich and the poor. The number of non-regular workers exceeds 20 million and has reached 38 percent of the total workforce.

PM Shinzo Abe said in his policy speech on February 28, 2013; 'We will aim to be the easiest country worldwide in which to do business.' This remark clearly shows the class character of the Abe administration.

We will further strengthen our struggle against the neoliberal offensive by the government and monopoly capitalists, supporting the development of a class-oriented labor movement.

We, AWC-Japan, are fighting against these reactionary policies with our full effort

We, along with other organizations, are developing our struggle to stop the new security bills, and to bring down the Abe administration. We also promote unity and mutual development of both anti-base movements in Okinawa and 'mainland' Japan, expanding our solidarity work for the Okinawan people's anti-base struggle and supporting people's resistance against construction/consolidation of the US bases in Iwakuni, Kyotango and other areas. We are also fighting to stop restarts of idled reactors. And, we struggle against the Abe administration's historical revisionism, confronting racist and chauvinistic propaganda

We are fighting in solidarity with workers and people in the Asia-Pacific region and the rest of the world. We will develop international unity and joint struggle among workers and people through the regional network of the AWC and other international people's alliance including the ILPS. We will share the anti-APEC struggle in Manila, Philippines in November 2015, resisting neoliberal globalization and consolidation of the US-led military alliance in the region. We will also call for international joint action against the G7 summit meeting will be held in Japan in the summer of 2016.