NYC Protest against Trump and NBC outside Saturday Night Live

On Saturday, November 7th at 6pm, Ayotzinapa NY, the ANSWER Coalition (Act Now to Stop War and End Racism) and the NYS Youth Leadership Council are sponsoring a protest against GOP presidential candidate Donald Trump and Saturday Night Live outside of NBC Studios at Rockefeller Center.

Trump is set to host SNL despite nearly 450,000 online petitions sent to NBC via various sites calling on his invitation to be rescinded. NBC previously canceled ties with Donald Trump and dropped his show “The Apprentice” on account of his vile racism, but now they are again granting him access to millions of viewers with free publicity. 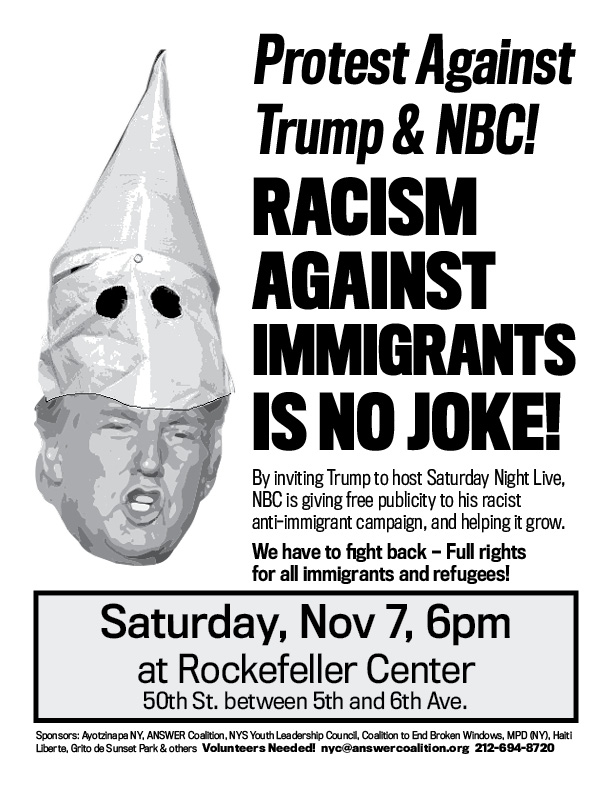 The Trump Campaign was hit with an injunction from a Bronx court in recent weeks after his security team attacked a protest outside the Trump Towers. "Trump claims to be all about speaking his mind, but has repeatedly tried to suppress dissent, including attacking protesters and ejecting reporters who ask him questions he doesn't like. We won't be intimidated," said Jaime Gonzalez of Ayotzinapa NY.

Saturday's protest will call out Trump's scapegoating of immigrants for the declining social and economic conditions facing the U.S. working class, and his description of Mexicans in particular as "rapists" and "criminals." Such language has received him the endorsement of former KKK leader David Duke, and led to a surge in far-right rhetoric and violence in different parts of the country.

"Although it is understandable to see Trump as just a clown, the dangerous racism he has unleashed throughout the country is no laughing matter," stated Karina Garcia of the ANSWER Coalition. "SNL, with their outrageous decision to give Trump such a huge platform, is actively helping his campaign of anti-immigrant bigotry grow. Maybe if they had any Latino cast members, SNL would understand this. Some things are more important than ratings," Garcia continued.

The protest has also been endorsed by the Coalition to End Broken Windows, El Grito de Sunset Park, the NYC chapter of the Popular Democratic Movement (of the Dominican Republic), and Haiti Liberte. The list of endorsers is currently in formation.

While Trump's campaign is based on division, his bigotry is also uniting many different communities — against him — and leading to a resurgence in immigrant rights activity. We will continue to protest him wherever and whenever he speaks.