Protest at Trump’s “Ribbon Cutting Grand Opening” for the Trump Hotel in D.C. 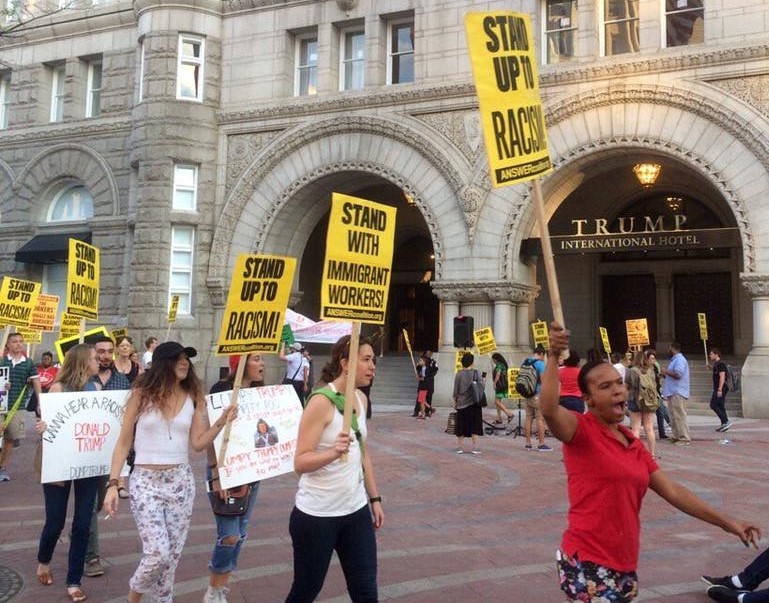 Donald Trump will be present in downtown D.C. for the “Ribbon Cutting” Grand Opening ceremony of the Trump International Hotel on Pennsylvania Avenue on the morning of Wednesday, October 26. So too will people protesting his message of racism, sexism and bigotry. The labor movement is also mobilizing to show solidarity with hotel and restaurant workers who seek to unionize for decent wages, conditions and for dignity. Join us tomorrow morning starting at 9:30 a.m. and stay through the ceremony!

Trump is trying to use the publicly funded Secret Service to close the area around his luxury hotel from protests as he engages in this elaborate money-making scheme for his latest hotel. But this won’t stop us.

Mara Verheyden-Hilliard, the Executive Director of the Partnership for Civil Justice Fund, called out this outrageous Trump tactic in a story in the Washington Post: “If they are in fact shutting the sidewalk, then the Trump Organization is able to use the Secret Service to create a no-protest buffer zone and shut down the sidewalk and the street for commercial gain — for a ribbon-cutting ceremony,” she said in an email. “He is not engaged in a political campaign event, he is here to make money and the Secret Service, at taxpayers expense, is serving as private security to facilitate his photo opportunity.”

In the face of the September 12 protest at the soft opening of the Trump International Hotel, Donald Trump decided to stay away. The Trump family will be present at the ribbon-cutting ceremony on Wednesday.

From the very beginning of his campaign, Trump has served as a lightning rod for bigotry against Mexicans, Muslims, the Black community, immigrants, refugees, women and people with disabilities. He has scapegoated the most vulnerable communities for the declining social and economic conditions facing working people in the United States and portrayed himself as some strongman billionaire savior for those who have been left behind. But he is just another servant of Wall Street and the Military-Industrial Complex with an economic agenda to reduce taxes and regulations for the Fortune 500 corporations while promising to spend even more on the military, weapons and war rather than people’s needs.

While Trump's campaign is based on division, his bigotry is also uniting many different communities — against him — and leading to a resurgence in protest activity. We will continue to protest him wherever and whenever he speaks.

- Let's stand together with Mexican and immigrant workers, and all refugees!

- Let's stand together with our Muslim and Arab American neighbors!

- Let's stand together for women’s and LGBTQ rights!

- Stop the scapegoating — the people united will never be defeated!

Initiated by the ANSWER Coalition