Reports and photos from the frontlines in Baltimore: Justice for Freddie Gray! 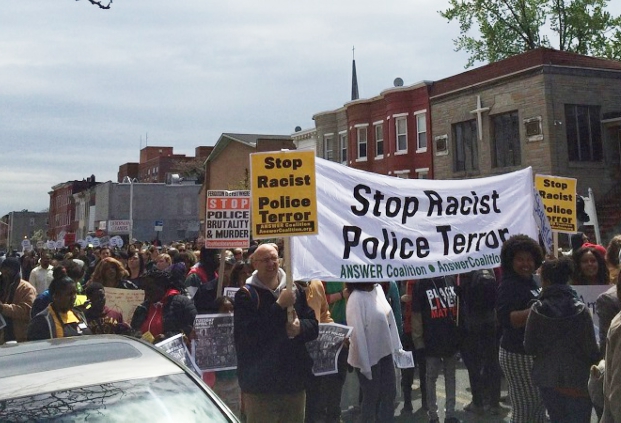 ANSWER activists have been on the ground in Baltimore demanding justice for Freddie Gray and an end to racist police terror.

Freddie Gray, a 25-year-old Black man, was arrested on April 12 in front of the Gilmor Homes and was beaten by police officers while in custody. At some point during his arrest, Gray sustained fatal traumatic injuries, including a severed spinal cord in his cervical (neck) region, and was taken to the R Adams Cowley Shock Trauma Center after long delay by the police. Freddie died in the hospital on April 19 after multiple surgical attempts to stabilize his critically ill condition.

His death sparked widespread protest and rebellion against racism and police terror in Baltimore. Below please find two reports from the actions last week, and an album of photos.

We will continue to be in the streets. New reports and photos will be posted soon!

Hundreds of angry protesters gathered in front of Baltimore City’s Western District Precinct on Wednesday night to demand justice for the murder of Freddie Gray by Baltimore police.

Protest and rebellion alive in the streets of Baltimore, demand justice for Freddie Gray

April 25 marked a day of mass protest and rebellion against the Baltimore Police Department and the killer cops responsible for the unjust murder of 25-year-old Freddie Gray.