Statement of unity by Korean Americans and allies on the historic Inter-Korean summit and the upcoming U.S.-North Korea summit

The ANSWER Coalition is a signatory to this important statement from a wide range of Korean American and other progressive organizations and individuals. Check Zoom in Korea for the latest updates on people and groups that have signed on. 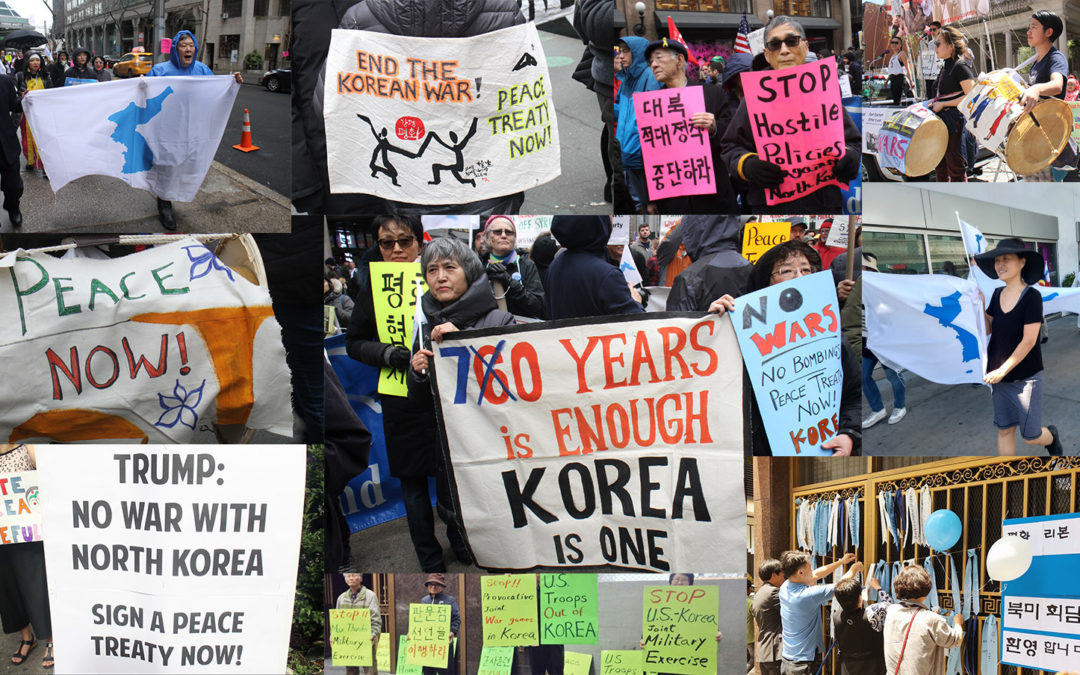 Since the historic April 27 summit between the leaders of North and South Korea at Panmunjom, longstanding tensions and war threats on the Korean peninsula have given way to the promise of peace and reconciliation. Soon, another historic summit, between the United States and North Korea, will take place in Singapore. The two parties, which not too long ago were on the brink of war, will finally sit down to discuss a peaceful settlement to the Korean War. All eyes of the world will be on this momentous event, which could determine not only the fate of the Korean peninsula and Northeast Asia but also the prospect of global peace.

We—Korean Americans who have long fought for peace and the self-determined unification of the Korean peninsula, and allies who stand on the side of peace and justice and share a critical stake in the struggle for peace in Korea—wish to make clear our views on the recent inter-Korean summit and the upcoming U.S.-North Korea summit.

1. We applaud the Panmunjom Declaration for Peace, Prosperity, and Unification of the Korean Peninsula.

In the Panmunjom Declaration, the leaders of North and South Korea “solemnly declared before the 80 million Korean people and the whole world that there will be no more war on the Korean Peninsula and thus a new era of peace has begun.” They also pledged to work together for independent unification.

The two leaders held hands as they crossed back and forth over the military demarcation line, demonstrating that the arbitrary line no longer has the power it once possessed as a symbol of division and confrontation. Should the governments of North and South Korea as well as the 80 million Koreans on the peninsula and the diaspora come together to implement the Panmunjom Declaration, we can realize peace, prosperity, and unification of the Korean Peninsula.

2. We welcome the U.S.-North Korea summit.

We hope the scheduled U.S.-North Korea summit will end seven decades of hostile relations between the United States and North Korea and usher in a new era of peace—on the Korean Peninsula, in Northeast Asia as well as for the rest of the world.

We recommend the following:

1) The United States and North Korea should agree to denuclearize the Korean Peninsula and faithfully carry out the agreement.

In the Panmunjom Declaration, North and South Korea “confirmed the common goal of realizing, through complete denuclearization, a nuclear-free Korean Peninsula.” Denuclearization of the Korean Peninsula means not only eliminating North Korea’s nuclear weapons but also denuclearizing the land, air, and seas of the entire peninsula. This is not North Korea’s obligation alone. South Korea and the United States, which has in the past introduced and deployed close to one thousand tactical nuclear weapons in the southern half of the peninsula, also need to take concrete steps to create a nuclear-free peninsula.

The plan to “denuclearize the Korean peninsula” is clearly outlined in the following past agreements:

In keeping with the recent inter-Korean summit, the U.S.-North Korea summit should produce an agreement for the “complete denuclearization of the Korean Peninsula” and ban the testing, production, reception, possession, storage, stationing, and/or use of nuclear weapons on the entire Korean Peninsula. Moreover, the United States should stop all military action and exercises that deploy or introduce its strategic assets on the Korean Peninsula and abolish its nuclear umbrella over South Korea.

Genuine peace on the Korean peninsula, which has housed nuclear weapons in both the North and the South and has been the site of acute military tensions for decades, should set a historic precedent and lead to global nuclear disarmament. Starting with the United States, all nuclear powers should take concrete steps to create a nuclear-free world.

2) A peace treaty is necessary for a lasting peace system on the Korean Peninsula.

The Panmunjom Declaration states, “During this year that marks the 65th anniversary of the Armistice, South and North Korea agreed to actively pursue trilateral meetings involving the two Koreas and the United States, or quadrilateral meetings involving the two Koreas, the United States and China with a view to declaring an end to the War, turning the armistice into a peace treaty, and establishing a permanent and solid peace regime.”

The United States and North Korea should take immediate mutual steps to prevent military conflict and alleviate tensions. They should establish and maintain a military hotline and communications channel and halt all military exercises and other provocative actions. The United States should withdraw the THAAD missile defense system in South Korea. And in step with North and South Korea, which have agreed to “carry out disarmament in a phased manner” in the Panmunjom Declaration, U.S. Forces in Korea should take corresponding measures to reduce its troops.

3) The United States and North Korea should end hostilities and normalize relations.

The 2000 US-DPRK Joint Communique states, “Recognizing that improving ties is a natural goal in relations among states and that better relations would benefit both nations in the 21st century while helping ensure peace and security on the Korean Peninsula and in the Asia-Pacific region, the U.S. and the D.P.R.K. sides stated that they are prepared to undertake a new direction in their relations.”

3. We urge Washington’s political leaders to put aside party politics for peace.

Past negotiations between the United States and North Korea have yielded meaningful moments of cooperation. There have been times when both sides made significant compromises with the shared goal of overcoming past hostilities and moving toward normalizing relations. They have produced outstanding agreements—the 1993 DPRK-U.S. Joint Statement, the 1994 Agreed Framework, the 2000 U.S.-DPRK Joint Communique, and the 2005 Joint Declaration of the Six Party Talks—that outline a path for resolving the nuclear crisis on the Korean Peninsula, creating a lasting peace system, and normalizing relations between the two countries.

The Trump administration should approach the upcoming summit with North Korea with sincerity and a commitment to carrying out whatever agreement is reached. We also urge Congress to put aside partisan interests in the historic interest of achieving peace in Korea and the world. We urge Congress to resolve to support the Panmunjom Declaration between North and South Korea and the upcoming U.S.-North Korea summit.

4. We stand with all who struggle for a just and peaceful world.

The actions of the Trump and previous administrations have been detrimental to peace in the world. The United States is responsible for endless war in Afghanistan, Syria and Yemen, bloodshed in Gaza, and escalating tension with Iran. While it pours billions of dollars into waging wars and maintaining troops abroad, its people face widespread unemployment and austerity programs that cut them off from decent education, healthcare and housing. U.S. militarism abroad has also led to increased militarization of the police and state-sanctioned violence against communities of color and gender non-conforming people at home.

We stand with people of conscience everywhere who defend peace, self-determination, and justice. It is our hope that the Korean Peninsula–once a land of strife, brutalized by over a century of colonization, division and war–will become a source of strength and inspiration for all as a beacon for peace, reconciliation, and unification in the twenty-first century.

Coalition of Koreans in America (미주희망연대)

Korea is One (우리는 하나)

About Face: Veterans Against the War

Alliance of Scholars Concerned about Korea

Committees of Correspondence for Democracy and Socialism

Friends of Iran’s Art and Culture

Global Network Against Weapons and Nuclear Power in Space

International League of People’s Struggles, US

Philadelphia Committee for Peace and Justice in Asia and the Pacific

United for Justice with Peace, Boston

United for Peace and Justice

US Labor Against War

Asia-Wide Campaign against U.S.-Japanese Domination and Aggression of Asia, Japan

Canadian Voice of Women for Peace

Humanitarian Battalion of Ireland and UK

Yamaguchi City People to Accomplish the Constitution of Japan

Leo Chang, Solidarity Committee for Democracy and Peace in Korea