Sunday, March 4
Gather at 12:00 p.m. at the White House
March to the site of the AIPAC Conference

RSVP and spread the word

Transportation from the East Coast and Midwest!
Buy bus tickets from New York City
See below for information about buses from Ohio & more 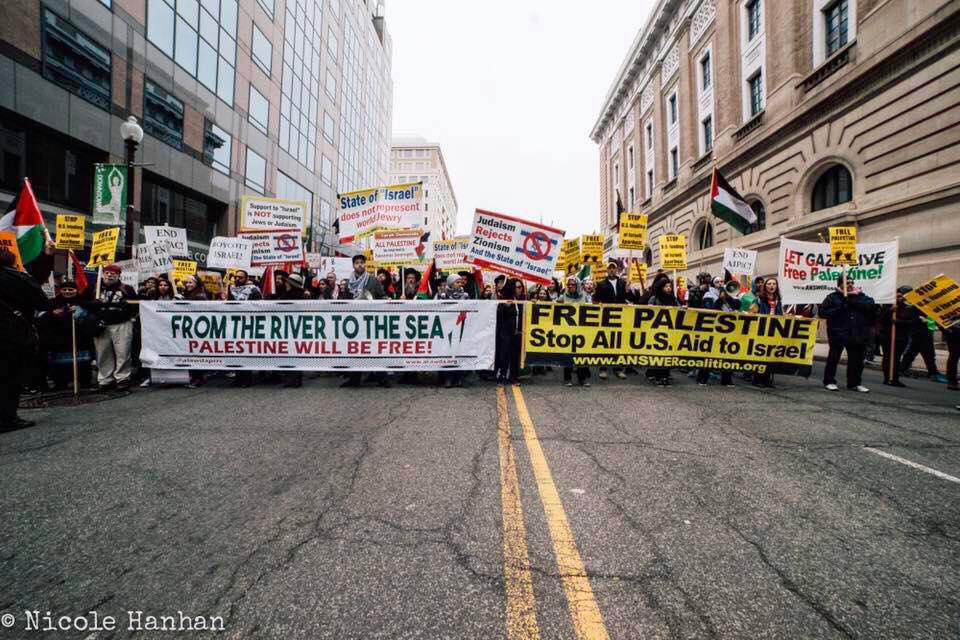 Palestine is under attack, and it is as important as ever to stand in solidarity with the people's struggle against the occupation and for freedom – from the river to the sea.

In the last year, this attack has been escalated by the Trump administration, which has not only maintained the long-standing U.S. policy of support for Israel but also taken the outrageous step of declaring Jerusalem to be its capital. And to show that he's serious, Trump is seeking $750 million as part of his latest budget request to build a new U.S. embassy in Jerusalem.

But Palestinians will never stop resisting. The courage of freedom fighters like 17-year-old Ahed Tamimi, currently held in Israeli prison, have inspired the world with their determination and defiance in the face of Israeli authorities.

The AIPAC conference features presentation by a wide range of despicable figures, from U.S. Vice President Mike Pence and UN Ambassador Nikki Haley, to figures of the extreme, racist right wing in Israel like Education Minister Naftali Bennett, Justice Minister Ayelet Shaked and Prime Minister Benjamin Netanyahu. Support for the oppression of Palestinians by Israel is a bipartisan issue in the U.S. Congress, and prominent Democrats like Representative Adam Schiff and Senator Ben Cardin are also featured speakers.

Protesters will be gathering for a march on the convention co-organized by the ANSWER Coalition and Al-Awda, The Palestine Right Of Return Movement to support Palestine and demand an immediate end to all U.S. support for the apartheid regime in Israel.

Outreach teams are spreading the word in cities and towns across the country. Below are photos from Ohio and Michigan, and outreach is continuing in the Midwest and across the East Coast, from New England to New York, Pennsylvania and the Washington, D.C., area.

Buses, vans and car caravans from the East Coast and Midwest

New York City, NY
The buses leave at 7:00 a.m. sharp from Union Square in order to make it to Washington, D.C. After the protest, we will arrive back to Union Square on the same day around 10:00 p.m. All tickets must be purchased in advance and will be sold on a first-come, first-serve basis. No refunds are available. Buy bus tickets from New York City.

Cleveland, Ohio
There are three buses leaving form the Islamic Center of Cleveland (6055 W 130th St.) at 4:00 a.m. on Sunday, March 4. Seats are free but you must sign up in advance.

Philadelphia, Penn.
A carpool is being organized that will leave at 8:00 a.m. sharp. Seating is limited and will be assigned on a first-come, first serve basis. E-mail [email protected] for more information and to reserve a seat.

People are coming on their own by car, train and plane from across the country. If you are organizing transportation, please send details to us at [email protected] and post them on the Facebook event.

RSVP and spread the word