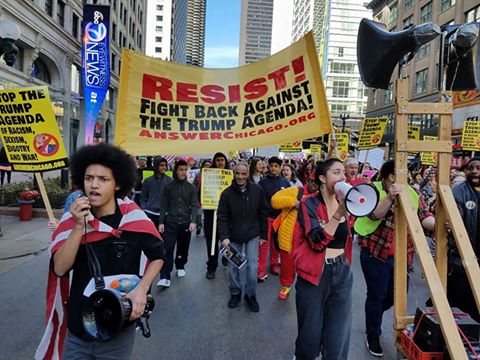 On February 19, 5,000 protesters took part in a march called by the ANSWER Coalition to reject the Trump agenda. This was part of a wave of protest across the country one the one-month anniversary of Trump's Inauguration. Below is a report and video of the action.

In the early afternoon of February 19, 5,000 people gathered outside Chicago’s Trump Tower to protest the one month anniversary of Donald Trump’s inauguration. The protest was organized by ANSWER Chicago in the wake of a month that has seen a whirlwind of attacks on immigrants, Muslims, women, and other oppressed groups in the United States, as well as continuous resistance by the people against these attacks.

The protest began as a rally outside Trump Tower on an unseasonably warm day. That the protesters were able to attend in only light jackets during the normally bitter Chicago winter was itself a testament to the threat the Trump regime’s climate denialism and aggressive stance on oil extraction poses to humanity.

After thousands of people of all races and genders had gathered, the crowd took to the streets and marched through downtown Chicago. Chants included “No wall, no registry, no white supremacy” and “Black lives matter.”

The crowd held the streets for over an hour before finishing the march at Federal Plaza. Here another rally began as organizers and community members addressed the crowd.

Candice Choo-Kang, an ANSWER organizer, told the crowd that, “The time for waiting for some lesser evil, some rich democratic politician, to save us is over.” The crowd cheered in agreement.

An undocumented activist with the co-sponsoring group Rise And Organize extorted the protesters to protect targeted communities from deportation raids, while Carolyn Ruff, a member of Black Lives Matter Women of Faith, told them that now was the time to unify and fight back regardless of skin color or religious differences.

Ali Hasan, an organizer with People United Against Oppression, attacked the Trump regime’s Muslim ban. Of the seven countries targeted in the ban he said, “These countries do have ties to terrorism: they have been terrorized by the United States military.”

One of the final speakers was John Beacham, the coordinator of ANSWER Chicago. He stated that the Trump regime could only be defeated when workers and the oppressed in America unite around “a fighting program of their own and build up their own organizations and institutions.” He said, “We must demand total equality for the oppressed and take possession of the wealth our labor creates so that we can solve the many problems we face and defeat the Trumps of this world.”

Other speakers at the rally included Sarah Jester of Chicago Students Union, Andy Thayer of the Gay Liberation Network, Patrick McWilliams of the Party for Socialism and Liberation and Joseph Pughsley of Freedom First SCLC.

After thirty days that have felt like thirty years, thousands of people were still ready to march through the streets in order to voice their opposition to the Trump regime’s horrifying agenda. In the months to come renewed attacks on the oppressed are a certainty, as is an escalation of the exploitation of the working class. The Trump regime’s saber rattling will continue and the threat of war will loom over all citizens of the world. The 2/19 protest was a promise that we will not accommodate ourselves to the regime. Whether thirty days or three hundred, there is no expiration date on our resistance. The movement will continue to grow, to organize, and to fight back, until the Trump regime is defeated entirely.