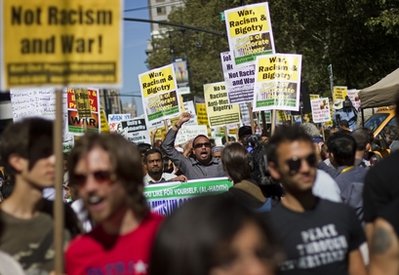 Thousands of people rallied today in lower Manhattan in defense of the Muslim, Arab American and South Asian communities that have been increasingly demonized in recent months.

The demonstration dwarfed the smaller right-wing, racist mobilization that was organized in opposition to the planned construction of an Islamic Community Center several blocks from the site of the former World Trade Center in lower Manhattan.

Today’s demonstration was organized by a broad coalition of progressive, anti-war, Muslim, Arab American, South Asian and social justice organizations from the Black, Latino and Asian communities. The ANSWER Coalition organized its members and supporters to join this important mobilization against racism and Islamophobia. Speakers at the demonstration included Ramsey Clark, Cynthia McKinney, representatives of the International Action Center, December 12th Movement and others.

It is critical for the anti-war movement and all people of conscience to stand together in defense of the Muslim community, and in opposition to racism and war.