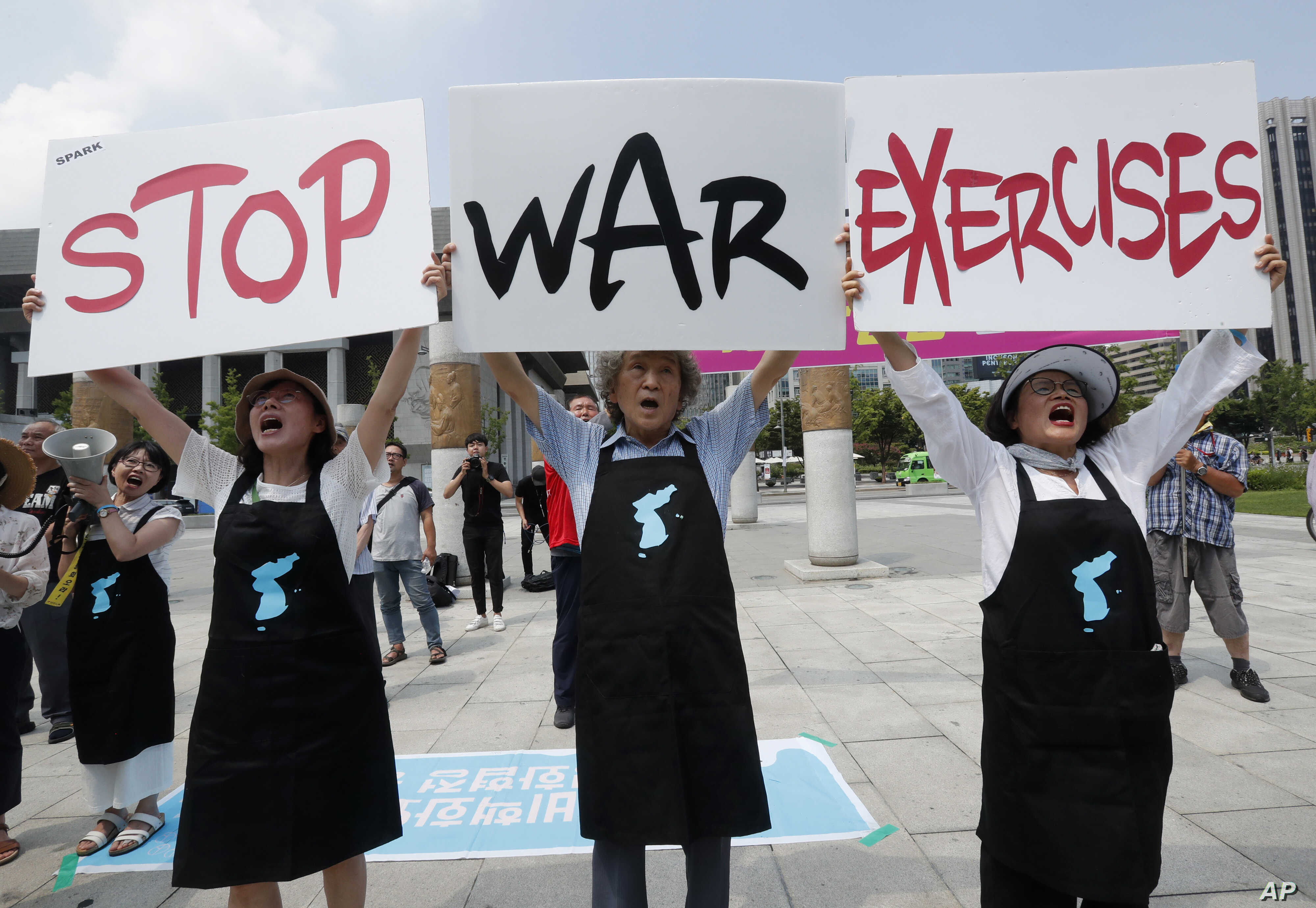 The “games,” conducted by the Combined Forces Command, have recently been known as Key Resolve and Foal Eagle, the former of which involved simulated war games and the later of which was “the peninsula-wide training portion of the drill.” Foal Eagle entailed field combat training with upwards of 500,000 south Korean soldiers shooting blanks across the 38th parallel, and over the last two decades have featured anti-submarine attacks and maritime exercises, including amphibious landings, and aircraft carriers with bombers flying around the DPRK’s air space. They “simulate” incursions, large-scale invasions, the bombing of the DPRK, and even the “decapitation” of the country’s leadership.

What the U.S. calls “war games” are in reality what the DPRK calls them: war rehearsals. The government and people in the DPRK have no way of knowing if the “exercise” will be an attack or invasion. The DPRK has reasonably called the games a form of “psychological warfare.”

The historic April 27, 2018 inter-Korean summit that produced the Panmunjom Declaration, served as the basis for the first Kim-Trump summit in Singapore on June 12 the same year. This was the first time the leaders of the two countries ever met face to face. Trump announced that the Foal Eagle war exercises would be suspended because they were too costly and a barrier to the peace process. They cancelled several war exercises and modified others by scaling them back and holding them only as simulations. Yet in 2019, after the US-DPRK Hanoi Summit was sabotaged by John Bolton, the U.S. announced a new round of war exercises called The Dong Maeng, which have generally not included outdoor drills.

Trump’s motivations for establishing peaceful relations with the DPRK were not in any way based on his politics or ideology, but on his personal interests and ego. He wanted to be remembered not as the President who was impeached but the President that ended the Korean War. It was the war hawks within his own administration and Congress--both Democrats and Republicans--the prevented this from happening. The 2018 National Defense Authorization Act passed in congress restricted the reduction of active-duty troops in South Korea below 22,000 unless James “Mad Dog” Mattis--then Trump’s Secretary of Defense--certifies that it would not harm the interests of the U.S. or its allies.

This year’s war preparations are part of a Combined Command Post Training that are primarily computer simulated and include minimal troops, outdoor activities, and equipment because of COVID-19.

President Moon and Chairman Kim have friendly relations, but their inability to implement the Panmunjom Declaration is largely due to U.S. and U.N. sanctions against the DPRK, which prevent even railway travel or cargo to pass through the North to get to China. It also prevents the rehabilitation of joint enterprises in the Kaesong Industrial Park, an inter-Korean economic zone just across the border of North Korea that was established in 2002 and shut down in 2016 by the previous President Park Geun-hye, who was impeached and is currently imprisoned on corruption charges. Even during the Park’s existence, its potential was hampered by U.S. sanctions, which prevented the South from bringing computers to the North. Phone calls were expensive because they had to be routed through Japan.

President Moon came to power from the 2016 Candlelight Movement that overthrew President Park. His popularity is partly due to his efforts to return to inter-Korean cooperation and reunification, and his approval ratings decline or increase depending on the state of this cooperation. The Democratic Party of Korea he represents won a landslide victory in the 2020 legislative elections. Yet the colonial status of South Korea constrains his ability to determine and lead the process of peaceful reunification.

One of President Moon’s goals is to take back control of the country’s armed forces, which are under the command of the US Forces Korea (USFK). He announced this in 2017 and there are several steps that he needs to take to do so, namely by “proving” the country’s ability to maintain its own armed forces without the U.S. In this sense, the scaled-back war preparations could delay that process.

On March 11, South Korea’s Reunification Minister Lee In-young emphasized the need to maintain “a basic level” of joint exercises in order to regain operational control over the military. Yonhap, a South Korean news outlet, reported that Lee, in an interview with local media, “pointed out the need to keep the joint exercises to ‘a basic level at the least’ for Seoul's efforts to retake wartime operational control (OPCON) of its troops from Washington but stressed that the exercises have been scaled-back and kept to a minimum.”

Relatedly, the Biden administration is continuing the Quadrilateral Security Dialogue--or Quad--an informal pact between the U.S., Japan, India, and Australia.Jake Sullivan, Biden’s National Security Adviser, affirmed that the administration will strengthen the quad, which held its first military exercise--against China--in November 2020. Part of the expansion would include South Korea, which has thus far not committed to anything. Chung Eui-yong, the recently appointed Foreign Minister, is hesitant to get involved in an anti-China alliance, given that China is South Korea’s largest trading partner.

Also on March 11, USFK Commander Gen. Robert Abrams said that the North continues to pose a threat to the South and that later this year the U.S. will deploy additional anti-ballistic missile capabilities.

That same day, Japan’s Chief Cabinet Secretary, Katsunobu Katō, reasserted that Japan owns and will defend by force Tok Island, which is historically part of the Korean nation. Japan conquered the island during its colonization of Korea, plundering it for resources. The DPRK highlighted this instead of the war games in its main newspaper.

Thus far, the DPRK has not responded. They continue to abide by the Singapore Summit agreement. Even Gen. Abrams noted in a statement to the House Armed Services Committee that the DPRK, “hasn’t launched an Intercontinental Ballistic Missile since 2017. There have been no intercontinental ballistic missile (ICBM) or nuclear tests since 2017, all to say that the chance of miscalculation or mistake continues to be low, and armistice conditions continue to remain steady.”

The U.S. War against Korea only ended in an armistice on July 27, 1953, and the DPRK, progressive forces in the south and abroad, have been calling for a formal end to the Korean War that, on June 25, will be 71 years running. The absence of a peace treaty legitimizes the U.S.’s ongoing occupation of South Korea and its ability to threaten to and resume the active military war at any moment.

The U.S. has around 28,000 soldiers occupying the southern half of the peninsula and additional 50,000 troops stationed across the East Sea in Japan. The Combined Forces Command has, according to its website, “operational control over more than 600,000 active-duty military personnel of all services, of both countries. In wartime, augmentation could include some 3.5 million ROK reservists as well as additional U.S. forces deployed from outside the ROK. If North Korea attacked, the CFC would provide a coordinated defense through its Air, Ground, Naval and Combined Marine Forces Component Commands and the Combined Unconventional Warfare Task Force. In-country and augmentation U.S. forces would be provided to the CFC for employment by the respective combat component.”

Biden’s Secretary of State, Anthony Blinken, was a critic of Trump’s rapprochement with the DPRK. Biden himself was highly critical of Trump’s attempts to de-escalate tensions and move toward normalizing U.S. relations with the DPRK, even calling Chairman Kim a “thug.” Last month, in an interview with Andrea Mitchell of MSNBC, Blinken said, “the first thing we’re going to do is to review the policy across the board to look at what tools we have, including additional sanctions, including especially additional coordination and cooperation with allies and partners, but also to look at diplomatic incentives. So once we do that, we’ll be able to tell you how we plan to move forward.” We don’t know what a comprehensive policy re-examination will entail, but it is definitely not going to be a continuation of Trump’s policy.

In response to a question about whether or not it’s “time to recognize North Korea as a nuclear power” and if “denuclearizing North Korea beyond any aspiration at this stage, especially because they have made so many advances in the last four years,” he said the DPRK’s arsenal “is a problem, a bad problem that has gotten worse over time.  And I would be the first to acknowledge that it’s a problem that’s gotten worse across administrations.”

Blinken’s first overseas trip will be to Japan and South Korea on March 15-18, where he and Defense Secretary Lloyd Austin will meet with Foreign Minister Chung and Minister of Defense Suh Wook. Blinken earlier said that China was the largest geo-political obstacle to address, and its likely the meeting will focus on bringing South Korea into the Quad as well as the administration’s approach to the “denuclearization” of the DPRK. Of course, the fact that the U.S. is the world’s largest nuclear power and the only country to have used them in a war, is not a pressing concern or even a factor.

The DPRK’s policy is consistent. They want a stable peace regime, the lifting of sanctions, and the ability to determine their own destiny and to pursue socialist development. Unlike the U.S., they’ve never threatened to pre-emptively strike another country. They consistently affirm that they won’t use nuclear weapons unless they’re forced to. In a January meeting of the Workers’ Party of Korea, Chairman Kim reaffirmed that he remains open to talking with the U.S. but that they have no choice but to develop their military and nuclear capacities because of U.S. aggression.

That the DPRK hasn’t yet responded by launching a missile or even a prominent denunciation of the war exercises is a testament to their highly intentional and measured considerations of how to respond. This is the exact opposite of how the U.S. would respond. What would the U.S. do if the DPRK and Russia or any two countries were conducting “war games” along its border to simulate the decapitation of the government’s leadership, a bombing campaign, or a maritime or ground invasion?

The Moon government too is trying to work within its constraints to pursue an end to the U.S. War against Korea. In a New Year address, President Moon said that Biden should talk with the DPRK and build on the progress made during Trump’s last years in office. The U.S. is supposedly occupying South Korea to defend its “ally” from the “threat from the north.” The fact that the South’s President--and the general population--want peaceful relations with their fellow Koreans in the north, some of whom are family members that haven’t seen each other in 70 years, makes it clear that this is a cover story for the real reason the U.S. wants to occupy South Korea: to pressure and overthrow the DPRK’s government and to prevent friendly relations amongst East Asian nations that, if allowed to blossom, would severely threaten the U.S. government’s “great power rivalry” with the People’s Republic of China.