Will the U.S. send more ground troops to Iraq? 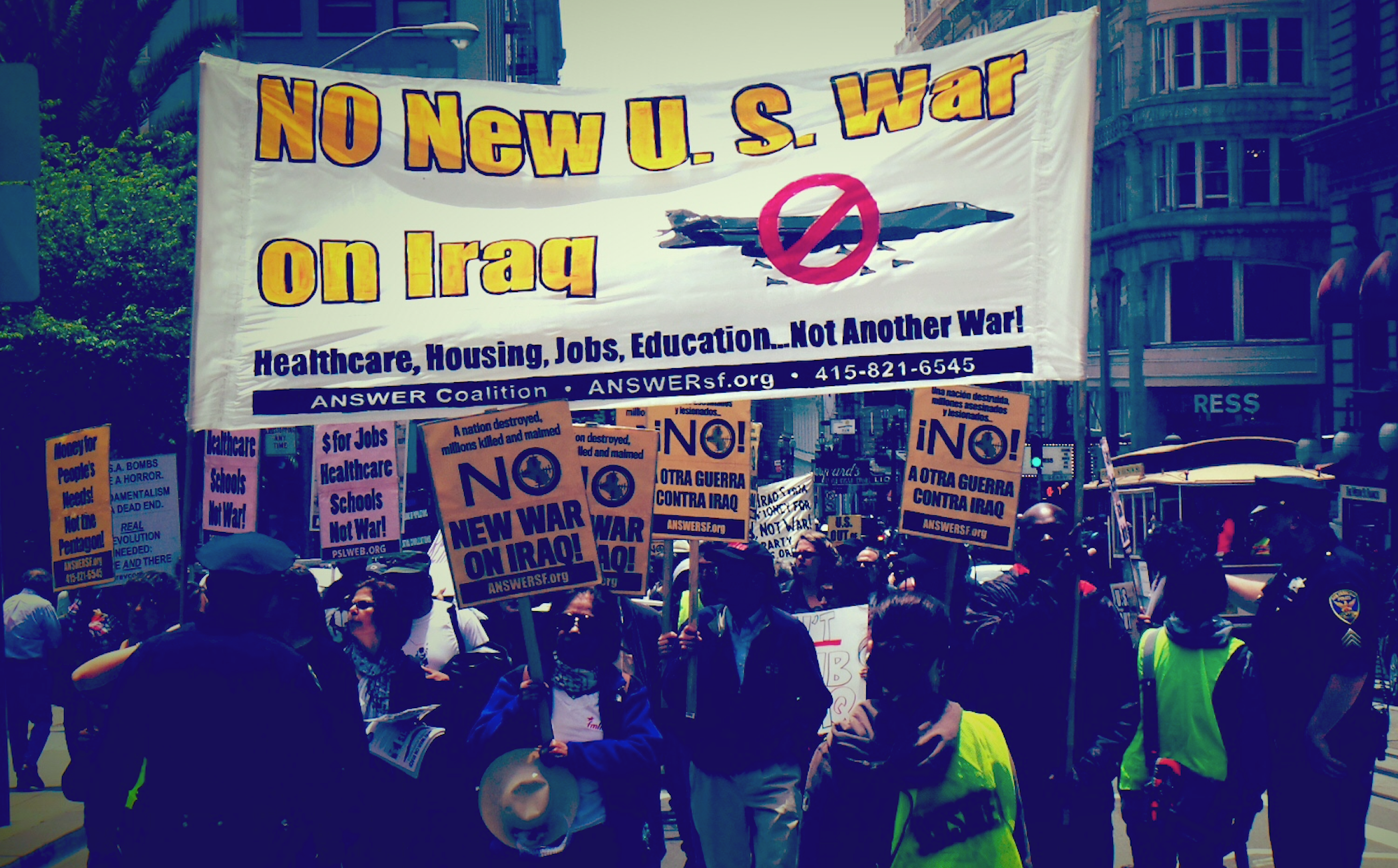 On May 17, Islamic State forces captured the city of Ramadi. Ramadi is the center of Iraq’s largest province, Anbar, and is less than a two-hour drive from Baghdad. The Islamic State has now taken Ramadi almost a year after it captured Mosul, Iraq’s second largest city.

For much of the last year, ISIS has been the target of frequent bombings by the United States and its allies. In the back and forth of the fighting, ISIS has, in fact, suffered losses, such as the loss of Tikrit. However, even the most optimistic U.S. assessment cannot claim that ISIS is being defeated.

President Obama considers the ISIS capture of Ramadi to be a serious setback, but other ruling-class analysts and politicians go further. “We are not only failing, we are in fact losing this war,” says former Army Vice Chief of Staff Gen. Jack Keane. “Moreover, I can say with certainty this strategy will not defeat ISIS."

Keane and other foreign policy hawks are calling for a new strategy, including the use of 15,000-20,000 U.S. forces on the ground. Leading the charge is Senator John McCain, attributing ISIS victories to Obama pulling U.S. troops out of Iraq too soon and calling for another surge: “George W. Bush at least had the guts to reverse and respond with the surge. I wish, I pray, Barack Obama would do the same thing.”

It is understandable why sectors of the U.S. ruling class are calling for ground troops in Iraq once again. It is a response to the bleak prospects of current U.S. strategy producing the desired outcome of the imperialist establishment. Part of that strategy has to include the defeat of the Islamic State, and it is only forces on the ground that could possibly defeat them.

Iraq’s military does not lack training

Iraq’s military is not losing battles. It is largely refusing to fight. In spring 2014, ISIS did not capture Mosul through hard-fought battles. Iraq’s officers and troops abandoned their bases, their military hardware, took off and ran. Similarly, ISIS reportedly encountered little resistance in its recent capture of Ramadi, with government troops fleeing the scene. Mainstream media often blame losses by Iraq’s military on a lack of training. But Iraq’s military personnel have received plenty of training. Although there are reports of ISIS fighters having received intense training in various desert camps, it is hard to imagine a partisan group being better-trained than a standing army trained primarily by the U.S. military.

Why Iraq’s military will not put up a serious fight goes to the heart of what the U.S.-occupation did to that country. After the 2003 invasion, under the leadership of L. Paul Bremer, the U.S. proceeded to completely dismantle Iraq’s government, both its military and its civilian government institutions, in an effort to “deBa’athify” Iraq. The U.S. objective was to build a new Iraqi system devoid of any remnants of the Ba’ath Party, which had nationalistic and progressive elements to it. At a time when Iraqis resented the criminal occupation of their country, at a time when many Iraqis engaged in an armed struggle against the occupation, the U.S. proceeded to build a new military. It should be no surprise that recruits to this new military, organized by the occupiers, were not the most nationalistic elements of the population. In the years since, the officer corps has proven to be particularly good at enriching themselves through corruption, but particularly inept at leading military operations involving real fighting.

When the U.S. and its junior partners encountered stiff resistance to their occupation, it served their interests to promote ethnic conflicts. What they feared most was Iraqis uniting against their occupation. After eight years of occupation, the U.S. had succeeded in creating deep divisions in the Iraqi population. The new Iraqi government, for years under Prime Minister Nouri al-Maliki, and now under Haideral-Abadi from the same Hezb al-Da’wa Party, is heavily sectarian, closely associated with the Shiite sect of Islam. Iraqi Sunnis do not consider the government to represent them. The government is widely seen as the government of the Shiites, not the government of Iraq.

In the absence of a cohesive national identity, one that strongly existed prior to the occupation of Iraq, it is no wonder that the military has proven to be an extremely unreliable fighting force. It is not training that this military lacks—it is a national identity. The people doing the most fighting against ISIS have been the Kurdish Peshmerga and the Shiite militia, supported and partly organized by Iran.

The U.S. has limited options

The Obama administration does not have the option of arming and training the Shiite militias, which would strengthen Iran’s hand and further its already strong influence in Iraq. The Peshmerga will primarily fight ISIS when predominantly Kurdish areas are challenged, not in predominantly Arab regions such as the Anbar province. The only remaining options are either for the U.S, foreign policy establishment to recognize the limits of its power and accept that it cannot currently will Iraq into circumstances that will serve its interests or to engage ISIS militarily on the ground.

The Obama administration is currently taking the former option. Senators McCain, Lindsay Graham and others are opting for the latter, advocating another U.S. occupation, a path that, if embarked upon, will undoubtedly expand far beyond 20,000 troops.

What did the surge accomplish?

In the mid-2000s, the surge policy, led by now disgraced General David Petraeus, did succeed in preventing a catastrophic U.S. defeat. But the determining factor in the relative success (for imperialist interests) of the surge was not the increase in the number of troops. It was the fact that Petraeus recognized that total victory—turning Iraq into a reliable client state—was no longer a possibility. Giving up on the hope of wiping out the resistance, the surge policy instead organized much of the resistance forces, strongest among the Sunni community in central Iraq, and put them on the U.S. payroll.

Given the wide-scale bloody ethnic cleansing campaigns by the Shiites against the Sunni community—itself a continuation of such campaigns carried out by both sides—the awakening councils were formed. Contrary to claims made by McCain and others, the surge was only a success insofar as it found a political solution to avert a disaster for the occupiers. The surge itself was a recognition of the limits of U.S. power and a significant lowering of goals pursued by the occupying forces—from seeking total victory to averting outright defeat.

U.S. occupations are disastrous for the people

Irrespective of the outcome of the 2003 invasion for U.S. foreign policy interests, the invasion and subsequent eight-year occupation has been an unmitigated disaster for the people of Iraq, as well as other people of the region. Without that occupation and the dismantling of the Iraqi state, ISIS would not exist today. Without that occupation and the promotion of ethnic conflicts, Shiites and Sunni Iraqis would not be engaged in bloody conflicts today. And without that occupation, there would not be a central government so devoid of a national identity that to many in the Sunni population an alliance with ISIS may seem preferable to living under Baghdad’s sectarian government.

As we observe the possibility of another ground invasion of Iraq (and possibly Syria) becoming an “option” tossed about by U.S. ruling-class politicians and analysts, it is important to keep in perspective how Iraq got to its current state of misery to begin with. The nightmare that the people of Iraq and Syria are living through is the direct result of the genocidal invasion and occupation of Iraq. More U.S. intervention in Iraq, in the form of another ground invasion in addition to the ongoing aerial bombings, will have more catastrophic consequences for the people of the region. The U.S. anti-war movement needs to be alert to mobilize against any such possibility.