Protest Arizona Gov. Jan Brewer when she comes to Boston!

*Please send to friends and through social networking sites!*

A CALL FOR A UNITED MASS DEMONSTRATION:
Say no to Arizona Gov. Jan Brewer when she comes to Boston!
Say 'No' to Anti-Immigrant Racism! 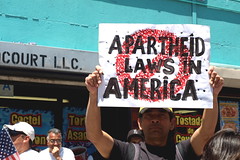 On Saturday, July 10, thousands will protest against anti-immigrant racism at the National Governors Association annual meeting in Boston.

Arizona Gov. Jan Brewer’s racist law, SB 1070, has ignited a firestorm of protests around the country at the very time when immigrants and their supporters are standing up for reform. In addition to SB 1070, which legalizes racial profiling and is aimed at all people of color in Arizona, the state has passed a bill, HB 2281, which bans ethnic studies from public classrooms. Other states are reportedly considering similar moves.

In Massachusetts, a series of anti-immigrant amendments were passed into the State Senate's version of the budget, restricting access to basic social services like healthcare, education and housing. Also included is the creation of an anonymous tip line for the public to report on undocumented people and mandating the state to investigate all reports made.

These attacks come at a time when all people are suffering from the wave of budget cuts and mass unemployment that makes racism and anti-immigrant xenophobia so dangerous.

It’s time for Brewer and the rest of the state governors to be met with the outrage felt by millions of immigrants and their supporters.

Immigration must be on the agenda of the annual meeting of the National Governor’s Association—and our voices must be heard!

Join us on Saturday, July 10 to demand:

* Repeal Arizona’s SB 1070 and HB 2281!
* From AZ to MA: No to all anti-immigrant legislation!
* No human being is illegal—Full rights for all!
* End all racial profiling and police brutality! Stop the raids and deportations now!
* Stop the budget cuts! Jobs, healthcare, education and housing—not war!

Call to Action issued and endorsed by