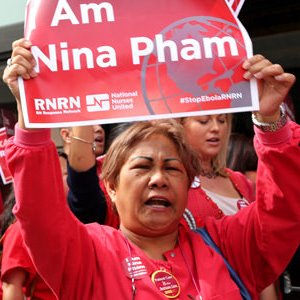 In what amounted to a mass global rallying call of health care workers, over 11,500 registered nurses from countries all over the world joined an international conference call convened by National Nurses United to discuss the burgeoning Ebola pandemic. The nurses’ union blasted the U.S. government for lack of preparation and lack of concrete action to ensure the safety of health care workers and the public.

Just as the startling news was breaking that a second health care worker had tested positive for Ebola, RoseAnn DeMoro, executive director of NNU, described how the past month has been a nightmare for nurses: “We know this, because the nurses have told us. What happened in Dallas could happen anywhere. We’ve been essentially ignored by the White House and the CDC, and they’ve been giving the hospital [in Dallas] far too much credit.”

DeMoro also stated that soon picket lines of nurses would possibly protest at hospitals, and that “it is an outrage that this is our responsibility, where nurses are sacrificing their lives and are being denied a seat at the table.”

In her remarks before opening the call to other nurses to tell their stories, De Moro stated that if nurses controlled the resources at the hospitals, “there wouldn’t have been an Ebola crisis in this country.” She also cited statistics from a survey of nurses where 80 percent responding confirmed that they had not yet received education about Ebola.

“Sadly,” she said, “the problems expressed by the heroic Texas Health Presbyterian RNs was predictable in our fragmented, uncoordinated private health care system, and it mirrors concerns we’ve heard from nurses across the U.S.

A nurse representing the Liberian Health Union reported that in Liberia 95 health care workers are dead, and more are expected to die. “We do not believe we should be subjected to a death sentence for doing our jobs,” she said.

Donna, a nurse from Washington, D.C., stated that “nurses are afraid. Accidents are waiting to happen. … We’re the first ones to triage the patients. We have no way to decontaminate ourselves. … They say they don’t even have money for goggles! … It’s a mess! We need help.”

She summarized the bigger problem hampering an effective response to Ebola: “We do not have a national, integrated public health care system. What we have is multiple corporate health chains, each responding—or not responding—in their own uncoordinated way. We need a uniform national standard.”

Many nurses described being given little pamphlets on Ebola, and with no in-person training or education being forced to search the hospital for protective gear. And that patients at risk are ignored and left in the general population of hospitals. Many also pointed out how hospital administrators have sought to blame the victims and health care workers for the problem.

“We are demanding that President Obama mandate improved safety standards in U.S. health facilities. Not one more patient, nurse, or health care worker should be put at risk due to a lack of health care facility preparedness. The United States should be setting the example on how to contain and eradicate the Ebola virus.”

The letter also states that every health care employer must be directed to follow the Precautionary Principle and institute required standards that include among other demands: (1) optimal personal protective equipment for Ebola, (2) full-body hazmat suits for protection, (3) two direct care RNs caring for each Ebola patient, with additional RNs assigned as needed, with no additional patient care assignment, and (4) requirements for continuous interactive training with RNs who are exposed to patients.

Each day of the Ebola crisis brings new stories that illustrate the complete bankruptcy of the government regarding Ebola. Having plundered Africa for centuries, the imperialist powers have never provided funds for even the most basic infrastructures throughout the continent, including Western Africa where the Ebola epidemic is soaring out of control. If it continues to grow exponentially, there will be tens of thousands of cases within just months. International travel, production and banking will be disrupted throughout the world, presenting a dire situation for international finance capital.

Having consistently ignored the words of science and reason, whether it’s the AIDS crisis or the current Ebola pandemic, the ruling powers of the United States have chosen to ignore the current threat to world stability now rising up before them. Their criminal inaction regarding the suffering of families such as the loved ones of Thomas Eric Duncan and thousands of other African people demands a response from the people here in the U.S., Africa, Spain and everywhere.

Worry on Wall Street about the ultimate costs of containing the epidemic has already sent stock prices sliding downward. While billions of dollars for war flow freely from the seats of imperial power to finance bloody wars in the Middle East against the peoples of Syria, Iraq, Libya and Palestine, the thought of being required to provide funds for the control of Ebola, where profits would have to be foregone, sends shivers through their greedy spines.

Representatives of the ruling elite, such as Thomas Frieden, the disgraced director of the Centers for Disease Control should not only resign in disgrace but face charges of murder and neglect of those who suffer. Those failing to supply workers with needed equipment should be held accountable for their neglect. Supervisors protecting profits, instead of care and comfort, should be dismissed and sent away from the hospitals and clinics.

Obama, Congress, the Centers for Disease Control, and all the profiteering insurance, pharmaceutical and equipment companies should be expropriated and replaced by a socialist model of health care that provides quality universal care to all, plus adequate nutrition, clean water, sanitation, and education—all the things that prevent people from falling ill in the first place.

In a beautiful statement to the Dallas News, Josephus Weeks, a U.S. Army and Iraq war veteran and the nephew of Thomas Eric Duncan, the first person to die from Ebola in the United States, spoke eloquently about the death of his uncle:

“For our family, the most humiliating part of this ordeal was the treatment we received from the hospital. For the 10 days he was in the hospital, they not only refused to help us communicate with Thomas Eric, but they also acted as an impediment. The day Thomas Eric died, we learned about it from the news media, not his doctors.

“Our nation will never mourn the loss of my uncle, who was in this country for the first time to visit his son, as my family has. But our nation and our family can agree that what happened at Texas Health Presbyterian Hospital Dallas must never happen to another family.

“In time, we may learn why my uncle’s initial visit to the hospital was met with such incompetence and insensitivity. Until that day comes, our family will fight for transparency, accountability and answers, for my uncle and for the safety of the country.”