12 things you should know about Yemen 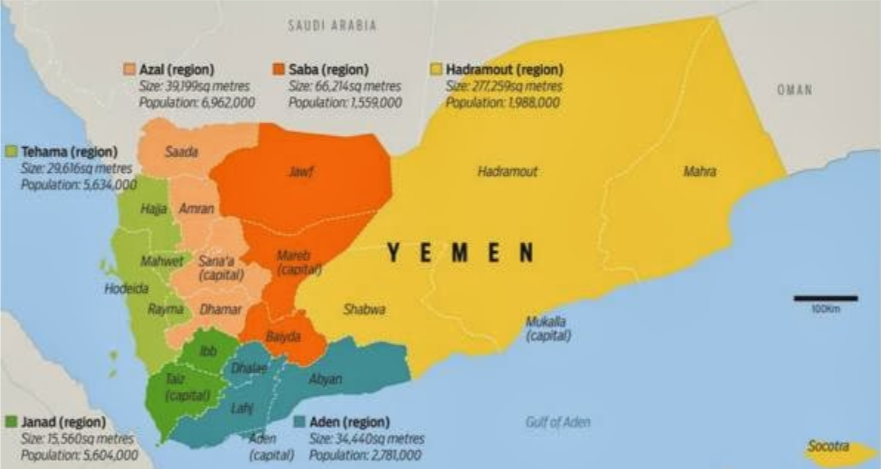 1. Yemen is a country with a rich historical and cultural heritage. The capital of Sana’a is one of the oldest continuously inhabited cities in the world.  Yemen is home to four UNESCO World Heritage Sites: The Old City of Sana’a, the old walled city of Shibam, the historic town of Zabid and the island of Socotra, in addition to many other natural and human-made wonders.

2. In addition to its cultural heritage, the country is also rich in natural resources, including oil reserves, that are largely unexploited. The Port of Aden is a large, deepwater port that can service large vessels. “In the 19th Century, it was an important ship-fueling port for steamers. After the Suez Canal opened, the Port of Aden became one of the busiest ship-bunkering, duty-free shopping, and trading ports in the world.” “In an important strategic location midway between Europe and the Far East, the Port of Aden occupies a central position on the world's major trading route through the Suez Canal. With one of the world's largest natural harbors, the Port of Aden contains the Inner Harbor, the oil harbor, and the anchorage and approach channels of the Outer Harbor.”

3. Yemen is located at the southern tip of the Arabian Peninsula, a strategically important area. It is bordered by the Red Sea to the east — across from East Africa — and the Gulf of Aden in the Arabian Sea to the West.

4. The Republic of Yemen has a population currently estimated at 27,000,000.  Roughly 85 percent (20 million) live in north Yemen (the former Yemen Arab Republic prior to unification.)  This part of Yemen is 64,843.15 sq miles. For comparison, it is somewhat smaller in area than the state of Washington with 71,362 sq miles and a population just over 7 million. In 2014 GDP per capita was $3,800. That was before the U.S.-backed Saudi war against Yemen had begun. By all accounts the economy has completely collapsed since then and medical services have become practically non-existent.

5. Yemen is facing a severe humanitarian crisis of starvation and disease. UNICEF estimates 1.8 million children currently face malnutrition. This includes 400,000 severely malnourished children facing death if not treated immediately. More than 8 million children do not have regular access to basic water, sanitation and hygiene services. (NBC News) In addition, the World Health Organization says there have been 1.2 million cases of suspected or confirmed cholera in Yemen since April 2017.

6. Yemen has been under attack by its wealthy neighbor, Saudi Arabia, since 2015, with the support of the United States. It is this war, including a blockade of the country, that has precipitated the humanitarian crisis. Doctors Without Borders/Medecins Sans Frontiere has reported that the US-sponsored Saudi-led coalition has been targeting medical facilities and personnel.

Here is a partial list of documented war crimes which demonstrates that the US-backed Saudi war is deliberately targeting the quality of life of non-combatants and all inhabitants of Yemen.

7. What is going on in Yemen right now is not a civil war despite the narrative in news outlets in the U.S. and Britain. Under this narrative, the “pro-government forces” are the Saudi-led and U.S.-backed coalition of Saudi, Moroccan, Egyptian and some Yemeni battalions supporting the Hadi government-in-exile. On the other hand, the Houthis and their allies are routinely described as the “Rebel Forces.”  The coalition of the Houthi Revolutionary Council and some elements of the Armed Forces of Yemen are in control of those parts of Yemen that made up the former YAR. Eighty percent of Yemenis live in this part of Yemen.

Who is Abdrabbuh Mansur Hadi? Hadi was the vice president to long time Yemeni president Ali Abdullah Saleh. When Saleh was forced to step down as a result of the Arab Spring in 2011, Hadi became a “caretaker” president, holding power until arrangements could be made for new, democratic elections. He was elected president in an uncontested election in February 2012.

At that time, Yemen appeared to be on the verge of a multi-party civil war, with an uprising in the North lead by the Houthis, secessionist stirrings in the South as well as Al-Qaeda in the Arabian Peninsula. The Houthis invaded the capital of Sana’a in Sept. 2014 and President Hadi was put under house arrest. Negotiations continued for a unity government. On March 25 Houthi forces, in alliance with forces loyal to the former president Ali Abdullah Saleh, took over Lahej, the province just north of Aden. Hadi fled the country on that day. At the same time, the unity negotiations were on the verge of reaching agreement but just then Saudi Arabia launched its brutal war, ostensibly in support of what they have termed “the legitimate government of Yemen.” Hadi has been residing in Saudi Arabia since and has not stepped foot in any part of Yemen since 2015.

8. Claims that Iran is involved in support of the Houthis are unsubstantiated. Most of the weapons with the Houthis have come from the Yemeni army, sections of which have joined the Houthi coalition. Iran’s role is always “alleged.”  There has been a naval blockade against Yemen enforced by the Saudi navy with U.S. support since 2015. If any weapons shipments had been intercepted from Iran during that time it would have been reported as big news. The main “evidence” for claims of Iranian involvement is that both the Houthis and Iranian leadership are Shia Muslims, albeit of different sects -- a rather slim foundation for such a strong claim. Independent experts have concluded that allegations of Iranian support for the Houthis are overblown.  In October 2017, Dr. Elisabeth Kendall, nonresident senior fellow with the Brent Scowcroft Center’s Middle East Peace and Security Initiative and senior research fellow in Arabic and Islamic studies at Pembroke College at Oxford University, reached the conclusion that “with or without Iran’s involvement, the underlying structure of the conflict would likely be the same.

9. The United States is also directly engaged in “classified” military operations in Yemen with “boots on the ground” as well as drone attacks. These operations have killed Yemeni civilians and even assassinated U.S. citizens of Yemeni descent living in Yemen. U.S. citizen Anwar Al-Awlaki was killed by a U.S. drone strike at the order of Pres. Barack Obama, without the rights of due process being afforded. Two weeks later, Awlaki’is son, Abdulrahman, age 16 and also a U.S. citizen), was killed in another U.S. drone strike ordered by Obama  On January 29, 2017, al-Awlaki's 8-year-old daughter, Nawar Al-Awlaki, was killed in a U.S. commando attack in Yemen ordered by Pres. Donald Trump.

10. The covert operations in Yemen on the part of US military units are often justified as an attempt to curb Al-Qaeda in the Arabian Peninsula (AQAP). However, AQAP considers the Houthis their biggest enemy and have fought on the Saudi coalition side. The AQAP  zones of control have spread because of the chaos of the war.

11. A ceasefire around the port city of Hodeidah went into effect at midnight GMT on December 18, 2018. This ceasefire was the result of direct talks between Yemeni representatives in Sweden. An ongoing ceasefire around Hodeidah will allow critical humanitarian aid to come into the country.