3 Big Lies About the U.S./NATO War on Libya 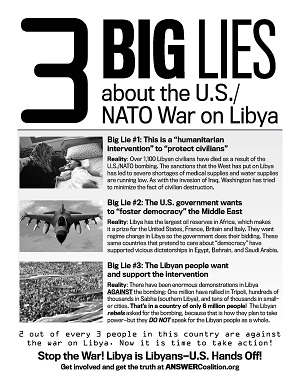 Download and distribute this PDF flyer in your neighborhood, workplace and school!
Get the truth out!

Big Lie #1: This is a “humanitarian intervention” to “protect civilians”

Reality: Over 1,100 Libyan civilians have died as a result of the U.S./NATO bombing. The sanctions that the West has put on Libya has led to severe shortages of medical supplies and water supplies are running low. As with the invasion of Iraq, Washington has tried to minimize the fact of civilian destruction.

Reality: Libya has the largest oil reserves in Africa, which makes it a prize for the United States, France, Britain and Italy. They want regime change in Libya so the government does their bidding. These same countries that pretend to care about “democracy” have supported vicious dictatorships in Egypt, Bahrain, and Saudi Arabia.

Big Lie #3: The Libyan people want and support the intervention

Reality: There have been enormous demonstrations in Libya AGAINST the bombing: One million have rallied in Tripoli, hundreds of thousands in Sabha (southern Libya), and tens of thousands in smaller cities. That’s in a country of only 6 million people! The Libyan rebels asked for the bombing, because that is how they plan to take power—but they DO NOT speak for the Libyan people as a whole.

Two out of every three people in this country are against the war on Libya. Now it is time to take action!
Stop the War! Libya is for Libyans—U.S. Hands Off!

Download and distribute this PDF flyer in your neighborhood, workplace and school!