4 Facts you need to know about the situation in Iraq 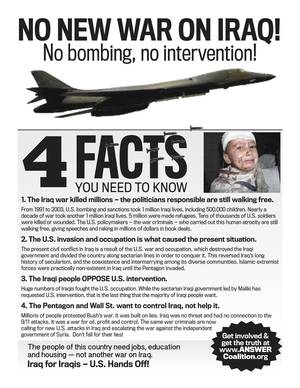 From 1991 to 2003, U.S. bombing and sanctions took 1 million Iraqi lives, including 500,000 children. Between 2003-2011 the U.S. war took another 1 million Iraqi lives. 5 million were made refugees. Tens of thousands of U.S. soldiers were killed or wounded. The U.S. policymakers—the war criminals—who carried out this human atrocity are still walking free, giving speeches and raking in millions of dollars in book deals.

2. The U.S. invasion and occupation is what caused the present situation.

The present civil conflict in Iraq is a result of the U.S. war and occupation, which destroyed the Iraqi government and divided the country along sectarian lines in order to conquer it. This reversed Iraq’s long history of secularism, and the coexistence and intermarrying among its diverse communities. Islamic extremist forces were practically non-existent in Iraq until the Pentagon invaded.

Huge numbers of Iraqis fought the U.S. occupation. While the sectarian Iraqi government led by Maliki has requested U.S. intervention, that is the last thing that the majority of Iraqi people want.

4. The Pentagon and Wall St. want to control Iraq, not help it.

Millions of people protested Bush’s war. It was built on lies. Iraq was no threat and had no connection to the 9/11 attacks. It was a war for oil, profit and control. The same war criminals are now calling for new U.S. attacks in Iraq and escalating the war against the independent government of Syria. Don’t fall for their lies!