Demonstration: 50th Anniversary of the March on Washington 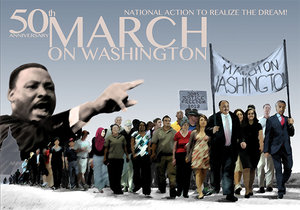 The ANSWER Coalition is supporting and mobilizing for the following important demonstration co-convened by the National Action Network and Martin Luther King, III. We believe that the heroic struggle of the civil rights movement is not yet finished, and it is critically important that people today take up the fight for equality and justice.

Saturday, August 24th, 2013
Rally at the Lincoln Memorial begins at 8:00am
Followed by a march to the King Memorial

On August 28, 1963 hundreds of thousands joined the historic March on Washington for Jobs and Freedom. Organized by A. Philip Randolph and other prominent civil rights leaders like Bayard Rustin, the demonstration was one of the largest in U.S. history and dealt a serious blow to Jim Crow segregation. It was at this protest that Martin Luther King, Jr. delivered his famous "I Have a Dream" speech.