A Century of Imperialism & War
How the World Has Changed, What Remains the Same? 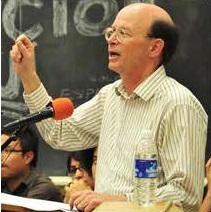 Richard Becker, Western Region Coordinator of the ANSWER Coalition and a leading member of the Party for Socialism and Liberation, will discuss the evolution of imperialism over the past century, its current stage, and what this means for activists and all concerned about international developments. A new book from PSL Publications, "Imperialism in the 21st Century" will be available.

100 years ago, most of the world was enmeshed in the deadliest war in history up until then. Two years later, in 1917, the U.S. became the last of the “Great Powers” to join World War I, a war of empires to re-divide a largely colonized globe. Over the past century since that mass slaughter, the world has gone through major changes including the even-more-deadly World War II, the period of decolonization and the socialist bloc, the short-lived “unipolar world” following the fall of the Soviet Union leading to the present world situation.