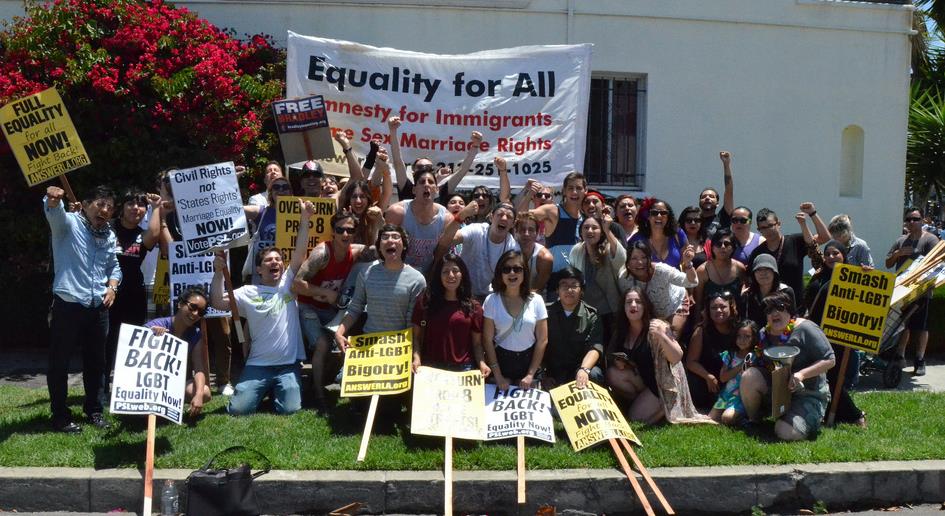 March with ANSWER in Los Angeles LGBTQ Pride! FIGHT BACK!

Join ANSWER LA, KmB Pro-People Youth and others for a fight-back contingent in the L.A. LGBTQ Pride Parade!

Stand with others to march for justice and equality, to honor and advance the struggle of LGBTQ people!

March with us to say:

FULL EQUALITY NOW, OR FIGHT!
Our mass movement has brought us this far. Our struggle for justice and equality must stay in the streets, active and alert. Whatever the Supreme Court decision, stay ready to stand up and continue the fight for LGBTQ equality. Bigots like Ted Cruz and Mike Huckabee are actively spreading hatred and promoting violence against our community right now. In the spirit of the Stonewall Rebellion, STAND UP, FIGHT BACK! No justice, no peace!

TRANS POWER IS LGBTQ POWER!
Stand with the ongoing surge of Trans people against violence and discrimination. In spite of all the violence and hatred fomented by bigots, fascist-type thugs, police and I.C.E. agents, the Trans community is rising up and saying no more! An injury to one is an injury to all of us. Unity with all Trans people! Stop discrimination everywhere!

WORKERS' RIGHTS ARE LGBTQ RIGHTS!
We stand in full solidarity with all workers, documented and undocumented, in their fight for just wages, working conditions, and full amnesty. We demand in solidarity with low wage workers across the US, many of whom identify as LGBTQ, a $15 dollar minimum wage and right to a union in all workplaces. We stand against the laws that remain in over 30 states allowing employment discrimination against LGBTQ people. We further demand full rights for all undocumented workers in this country and an immediate moratorium on deportations.

BLACK LIVES MATTER!
NOW IS THE TIME TO STAND TOGETHER IN UNITY!
The LGBTQ community has long faced the scourge of police terror. Trans youth face rampant police abuse today.
Black communities from Ferguson to Baltimore, and all across the country, have shown us all the power of resistance to centuries of racism, discrimination and violence against Black people. They have stood up to protest and resist the terror of racist police murders of Black, Latino and Native peoples. Stand in solidarity with the fight against racism now. Only an anti-racist and anti-sexist LGBTQ movement can win true equality for all.