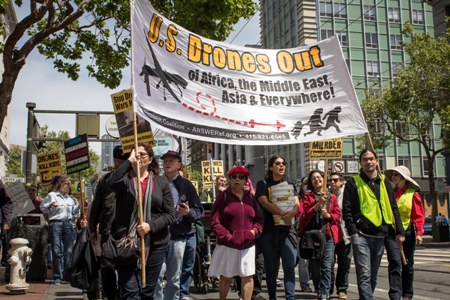 The ANSWER Coalition is a co-sponsor of this event

On October 27, the Air and Space Museum in Washington DC is sponsoring an event called “Predator: Transforming Modern Warfare with Drones” with speaker James G. “Snake” Clark. The event advertisement reads: “James G. “Snake” Clark carefully engineered this political and military feat in the Pentagon and over the skies of the Middle East at the initial direction of Air Force General Ronald Fogelman.”

Killer drones have murdered thousands of innocent people in Pakistan, Yemen, Iraq, and Afghanistan. The terror they have wrought has spread anti-American sentiment throughout the world, and their use has created a state of perpetual war with minimal transparency and accountability. Join us to protest outside the Air & Space Museum to tell them to stop glorifying these horrible tools of war!

Last time we staged a protest at the Air and Space Museum, museum security actually *maced* people protesters in the face, including nearby children! Make sure to bring goggles this time in case their hyper militarized security overreacts again.

Initiated by CODEPINK: Women for Peace