The following statement is re-posted from the website of WORD, Women Organized to Resist and Defend. 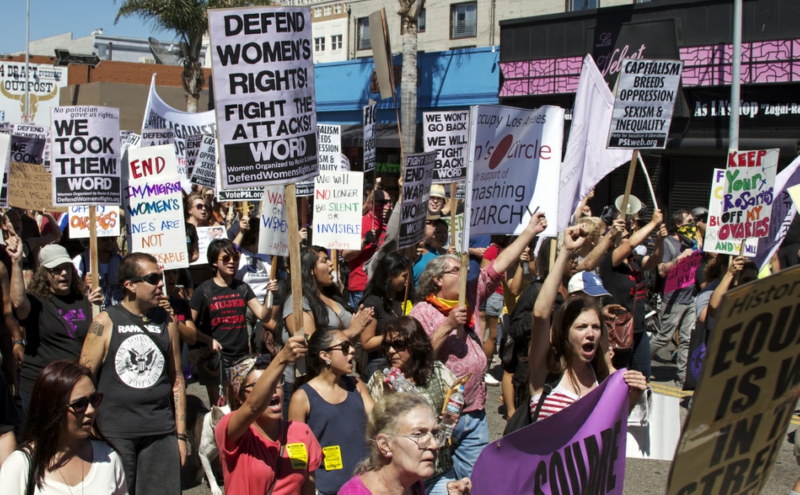 January 22, 2016, marks the 43rd anniversary of the Supreme Court decision on Roe v. Wade. We take the time to remember what life was like before Roe, and the many thousands of people who fought together to make abortion legal in the United States. It is also a time when many of us look at the attacks and challenges we still face in accessing and preserving this essential right: that women have the right to control their own bodies.

If we just look at the numbers, the task ahead of us seems daunting. As of 2012, 87% of U.S. counties had no abortion providers. This statistic is before half the clinics in Texas closed following the passage of HB 2. The Guttmacher Institute reported that more than one-quarter of the 1,074 state abortion restrictions enacted since Roe v. Wade have been in the last five years. Those 288 restrictions since the end of 2010 are nearly as many as had been imposed in the previous 15 years. Between 1995 and 2010, there were 292 restrictions enacted. From waiting periods to ultrasound requirements to banning earlier and earlier in the pregnancy, women have been struggling to continue to access abortion. With the passage of TRAP laws and the ever present intimidation and threat of violence, clinics and their staff continue to struggle to keep their doors open for women.

It is a rough and threatening time. But this is not what we choose to focus on as we reflect today. What we want to remember, who we want to remember, are those who organized and disrupted and fought to win legalized abortion 43 years ago. To remember that this is our history, and it is our struggle to continue forward.

Women have been involved in the struggle for justice for centuries as we have confronted all manner of oppression. Women fought (and continue to fight) against colonialism and slavery. Women put their lives on the line fighting segregation in the Jim Crow South and on the picket line striking for safe working conditions. Women fought for the right to vote and to not be treated as the property of our fathers/husbands. Women have organized against imperialist war.

In the 1960s, women upped the fight to be able to enter higher education and be paid an equal wage. The idea that “the personal is political” spread and opened up more areas of sexism and patriarchy to be challenged–not challenged for the first time, but certainly in a substantial and important way.) In 1969, the Redstockings, a radical feminist group, and hundreds of others disrupted a hearing of the New York legislature on abortion to demand reproductive rights. In March 1969, a speak out was held in the West Village in New York on abortion and reproductive rights that inspired actions like it across the country. It was these women (and men) who formed underground referral programs to access safe doctors and dispense other vital information to those in need. It was the pressure from the women’s movement that led New York, Hawaii, Alaska and Washington to legalize abortion. Fourteen other states reformed laws to allow abortion under certain circumstances.

In these days of unequal access, women did what they could. Women from this time period have told of pooling together funds to buy a ticket for a friend to travel to New York or Mexico to obtain an abortion. According to the Guttmacher Institute, in the year prior to Roe v. Wade, approximately 100,000 women travelled to New York City for abortions. Half of them travelled more than 500 miles to get there. Women who could not afford a ticket were forced find ways to self-induce abortions. These processes were risky, if not terrifying, as women could be reported if they had to go to the hospital afterwards.

It was not a benevolent, well-wishing Supreme Court that granted the right to abortion. It was the sheer force and strength of those who stood up to demand their right to something so vital. Later, in 2004, we continued to show our determination to defend what is our right when over one million people filled the streets of Washington, D.C., for the March for Women’s Lives. We saw it in those who flooded the halls of the Texas capitol building to stand against anti-choice HB 2 in 2013.

This spirit and determination is what we need now. This is what we must take away from our reflections on this year’s Roe v. Wade anniversary.

Once again the Supreme Court will be handing down a decision on an abortion bill that will have massive repercussions. The decision of Whole Women’s Health v. Cole will not just affect the women of Texas. This judgment of what counts as an “undue burden” will reverberate through anti-choice legislation across the country. We need to stand up like those of the generation before to fight and say “We won’t go back!”

With so many attacks, it is vital that we raise our voices and take to the streets. That we tell our stories and we organize. We need to fight to keep abortion legal and make it accessible for every woman who needs it: free and on-demand.

We need to fight the lies of the right-wing, anti-choice voices who try to manipulate the broad public through edited videos and crisis pregnancy centers. We need to demand comprehensive and accurate sex education, and free contraception and pre-/post-natal care (for those who want to have children). We need to declare our right to education and self-determination.