A breakthrough for peace in Korea? Join the trip to the DPRK‏ 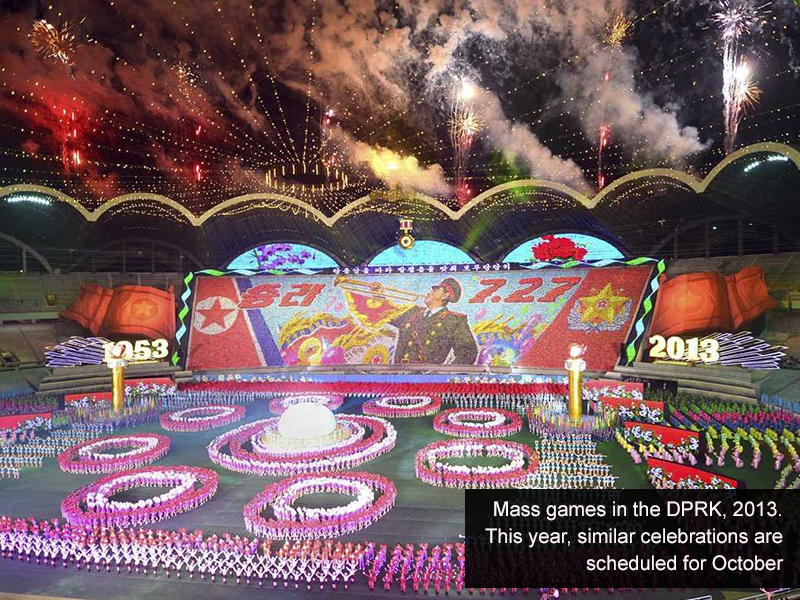 I was in Tokyo on August 22 at a large meeting of Japanese peace activists and Korean residents living in Japan. The discussion by the hundreds of assembled activists was animated by a crisis between North and South Korea that was resolved later that very day.

Everyone at the Tokyo conference was aware that the peaceful resolution of that crisis could also lead to major political developments on the Korean Peninsula.

The events of the past few days have only increased expectations that something very new may be possible on the Korean Peninsula.

In fact, the Korean Peace Tours trip to North Korea from October 6-13 comes on the eve of what may be a major thaw in relations between North and South Korea.

Across North Korea, the country is mobilizing for major celebratory events that will be taking place in the days around October 10, which marks the 70th anniversary of the founding of the Workers' Party. It was precisely at such spectacular events 15 years ago that President Clinton sent Secretary of State Albright to meet with the North Korean leadership in what appeared to be an effort to begin the normalization of relations between the United States and North Korea – an effort immediately shut down by George W. Bush when he entered the White House four months later.

The media reported today that “North and South Korea have agreed to hold reunions in October of families separated by the Korean War after all-night talks by Red Cross delegates from both countries.” (Guardian, September 8, 2015)

Is this the beginning of a new and hopeful development? Very possibly.

The agreement to hold the reunions for divided families comes just weeks after North and South Korea defused the military standoff at the peninsula's demilitarized zone on the 38th parallel, where Korea has been divided since 1945 at the end of World War II.

This is how the new North Korean leadership, in an official statement by head-of-state Kim Jong Un, described the August 22 agreement ending the standoff:

“The joint press release [between North Korea and South Korea] published at the contact provided a crucial landmark occasion of defusing the acute military tension and putting the catastrophic inter-Korean relations on the track of reconciliation and trust ...”

This is a critical moment and very possibly a historic one. What is needed is a change in the policy of the political establishment in Washington, D.C. It is time to end the Korean War once and for all.

The U.S. government just changed its policy on Cuba 54 years after it broke off diplomatic relations following Cuba's anti-colonial revolution. Over the years more and more people from the United States have visited Cuba, saw the country firsthand and demanded that the U.S. government change its policy.

The Korea Peace Tours, likewise, is an important way for the people to visit North Korea and see that country and meet its people for themselves.

The deadline is September 15 for people to join the October 6-13 trip.

These are exciting times. And the October 6-13 itinerary will provide people with a once-in-lifetime trip. It's not too late to join the trip but it is urgent that you act right away.