A letter from Ron Kovic to young veterans and GIs 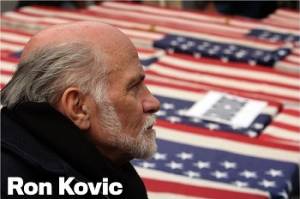 The following is a personal appeal from Ron Kovic, Vietnam War veteran and author of Born on the Fourth of July, to Iraq and Afghanistan war veterans and active-duty service members. Kovic issued the appeal to bring more veterans and GIs into the anti-war struggle and to support the work of March Forward! To learn more about March Forward! visit their website.

As a former United States Marine Corps infantry sergeant, who was shot and paralyzed from the mid-chest down on Jan. 20, 1968, during my second tour of duty in Vietnam, and someone who has lived with the wounds of that war for over 40 years, I am writing this letter to ask you to join me as we begin a critical new phase in the growing anti-war movement.

Many of you have already served multiple deployments in Iraq and Afghanistan. You have been coming home now for almost 10 years. Many have begun to question, to doubt these wars and our leaders. Over two million of you have served honorably in both theatres of conflict. Though many years separate us, we are brothers and sisters.

Though we have fought in conflicts generations apart, we have all been to the same place. We know what war is. We understand it, and for many of us, our lives will never be the same again. In many ways, we represent a very powerful force in our country—a moral, spiritual, and political high ground that is unassailable, a potential to transform our nation that is undeniable. No one knows peace or the preciousness of life better than the soldiers who have fought in war, or been affected by it directly: the mother of a son who has died, a wife who will never see her husband again, a child who will never have a father, a father who will never see his son again.

We are the reminders of what war can do, of how it can wound and hurt, and diminish all that is good and human. We struggle everyday to believe in a life that was almost taken away from us. We know that even though we have lost, though parts of our bodies may be missing, though we may not be able to see or feel, we are important men and women, with important lessons to teach, with important things to share.

Those of us lucky enough to have survived combat yearn for life now, for beauty, for all that is decent and good, for in war we saw the worst in the human being. We saw poverty and death, killing and savagery, the darkest sides of the human soul, the most hated parts of our humanity.

I, like many Americans who served in Vietnam and those now serving in Iraq and Afghanistan (and countless human beings throughout history), had been willing to give my life for my country with little knowledge or awareness of what that really meant.

Like many of you who joined up after 9/11, I trusted and believed and had no reason to doubt the sincerity and motives of my government. It would not be until many months after being wounded, and while recovering at a veterans’ hospital in New York that I would begin to question whether I and the others who had gone to that war had gone for nothing.

Change does not come easily, and opposing one’s government during a time of war is often very difficult. You've been taught to follow orders, to obey and not question, to go along with the program and do exactly what you’re told. You learned that in boot camp. You learned that the day the drill instructors started screaming at you. It is "Yes Sir” and “No Sir” and nothing in between. There is the physical and verbal abuse, the vicious threats and constant harassment to keep you off balance. It is a powerful conditioning process, a process that began long ago, long before we signed those papers at the recruit stations of our hometowns, a process deeply ingrained in the American culture and psyche, and it has shaped and influenced us from our earliest childhood.

Join Ron Kovic and other veterans in the fight against these wars.The late Dr. Martin Luther King Jr. once said that, "A time comes when silence is betrayal." King went on to say that, "The truth of these words is beyond doubt, but the mission to which they call us is a most difficult one. Nor does the human spirit move without great difficulty. Even when pressed with the demands of inner truth, men do not easily assume the task of opposing their government’s policy, especially in time of war. Nor does the human spirit move without great difficulty against all the apathy of conformist thought within ones own bosom and the surrounding world. Moreover, when the issues at hand seem as perplexing as they often do in the case of this dreadful conflict we are often on the verge of being mesmerized but we must move on."

Over 40 years have passed since Dr. King spoke those words to an overflow crowd at the Riverside church in New York City in 1967, and the tragic lessons of Vietnam continue to go unheeded. The same patterns of wars, lies, aggression and brutality continue to repeat themselves. Another country, another occupation, another reason to hate and fear, but in the end it is the same crime being committed over and over again, the same innocent civilians being killed, the same young men and women returning home in caskets and body bags and wheelchairs.

We have petitioned our government time and time again. We have peacefully marched and demonstrated for over a decade yet the killing and mayhem continues. Precious lives continue to be wasted as another generation of young men and women are squandered in this, our latest foreign policy debacle.

Our leaders refuse to listen. They refuse to learn. How many more senseless wars, flag draped caskets, grieving mothers, paraplegics, amputees, stressed-out sons and daughters, innocent civilians slaughtered before we finally decide to break the silence of this shameful night? Many of us trusted and believed that change would come, these wars would end, and that we would finally we be listened to but that is not at all what has happened. We have been tragically misled.

We have been deceived and betrayed. We have been promised peace and we have been given war. We have been told there would be change and nothing is changing. Rather than learning the lessons from the disastrous fiasco in Iraq, our government continues down the path of destruction, brutality, aggression and war, dragging us deeper into another senseless and unnecessary conflict in Afghanistan. The physical and psychological battles from the war in Iraq and Afghanistan will rage on for decades, deeply impacting the lives of citizens in all countries involved.

As the 43rd anniversary of my wounding in Vietnam approaches, in many ways I feel my injury in that war has been a blessing in disguise. I have been given the opportunity to move through that dark night of the soul to a new shore, to gain an understanding, a knowledge, a completely different vision. I now believe that I have suffered for a reason, and in many ways I have found that reason in my commitment to peace and non-violence. We who have witnessed the obscenity of war and experienced its horror and terrible consequences have an obligation to rise above our pain and sorrow and turn the tragedy of our lives into a triumph.

I have come to believe that there is nothing in the lives of human beings more terrifying than war, and nothing more important then for those of us who have experienced it to share its awful truth.

Each day that passes another life is lost. Each hour that this war drags on the need for a daring new approach by the anti war movement becomes more apparent. Bold, creative, and imaginative leadership is needed, and I do not believe there is a group more suited for that task at this time than the veterans of our nation’s most recent conflict.

At exactly 10:00 a.m., Thursday morning, Dec. 16, 2010, veterans of Iraq and Afghanistan, including troops now serving in the armed forces of the United States, will be leading a dramatic act of non-violent civil disobedience in front of the White House in Washington, D.C. with other brave veterans and citizens, protesting the wars in Iraq and Afghanistan, calling for all troops to be brought home immediately and without delay. (Click here to learn more about this action)

May this action and other actions like it in the days ahead represent a growing awareness by the American people that only they can end these wars and begin to redirect the priorities of our nation toward more positive and life affirming goals.

I am writing this letter to you today asking you to join them on that day—and the difficult days ahead, to bravely, and with great dignity step over that line you've not stepped over before and begin to exert that powerful moral force you as veterans and active-duty troops represent; to raise your voices, to protest, to demonstrate, to end these wars and make our country a better place.

With great admiration and respect,

Author, Born on the Fourth of July

Join Ron Kovic and other veterans in the fight against these wars.