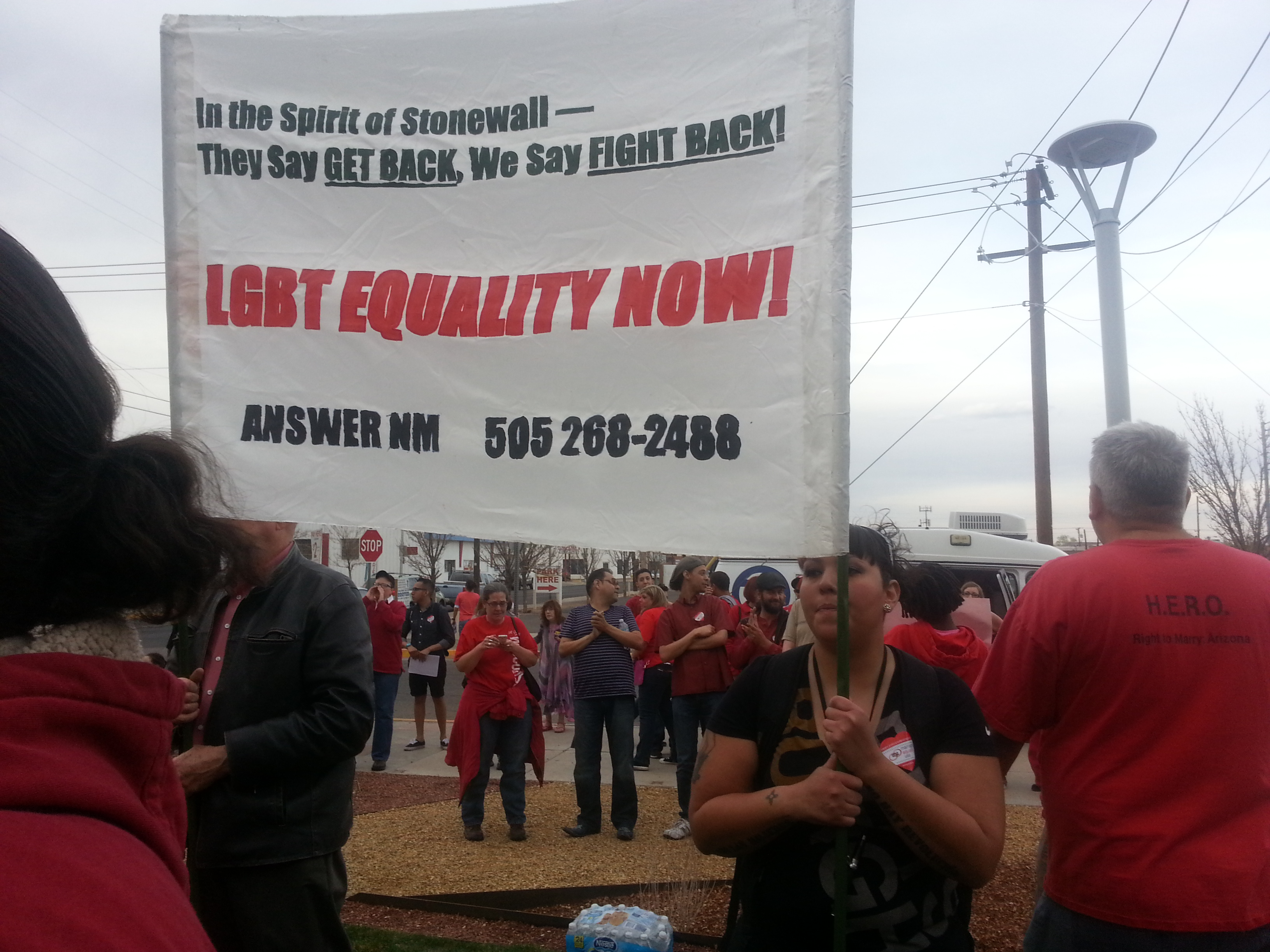 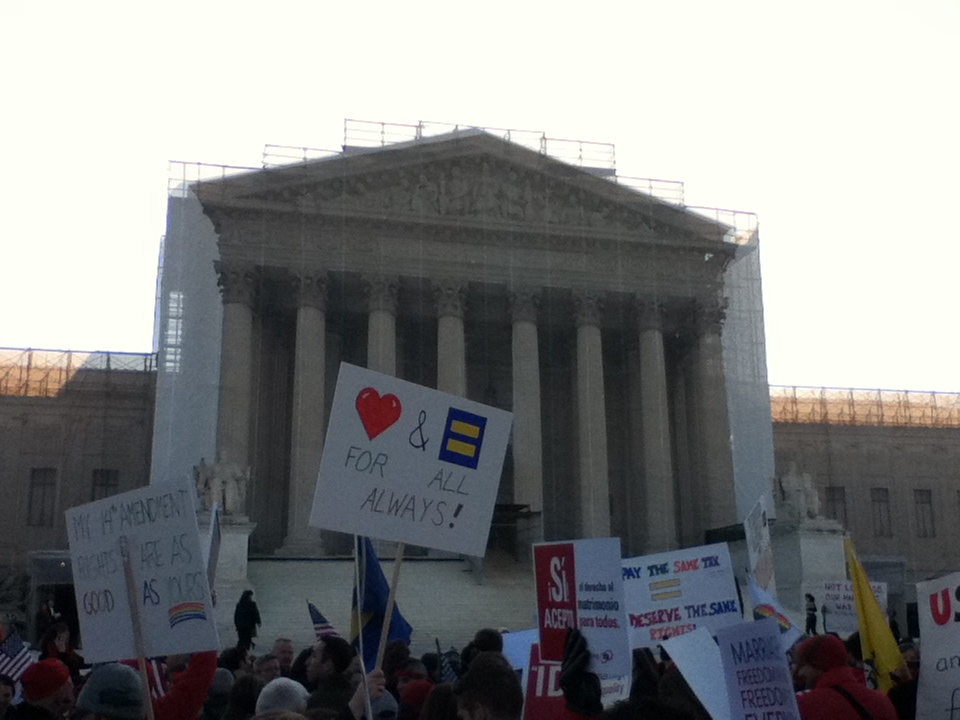 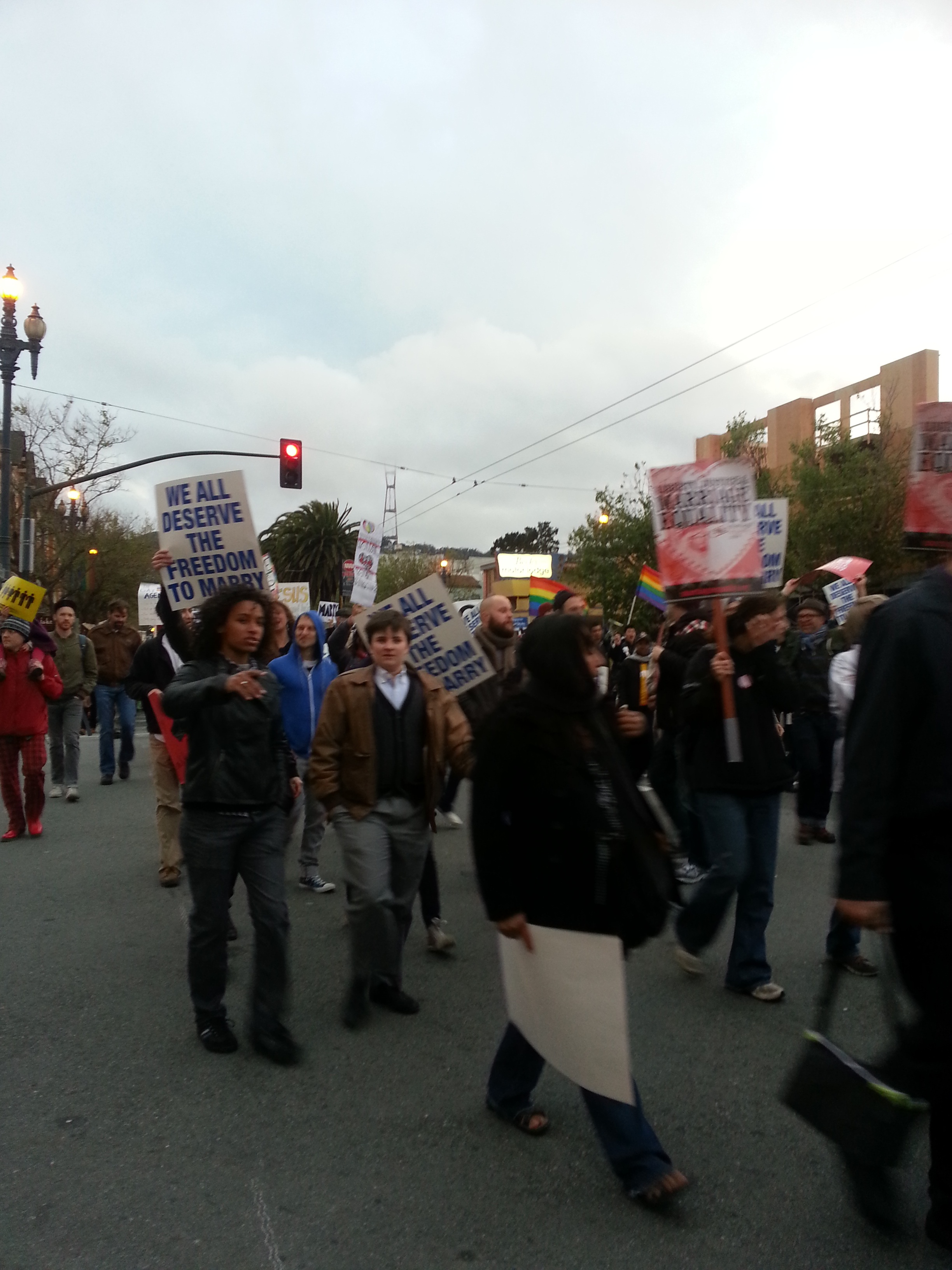 As the Supreme Court heard oral arguments in the cases regarding the constitutionality of the Defense of Marriage Act and California's Proposition 8, people took to the streets nationwide to demand marriage equality. In addition to rallies that took place outside of the Supreme Court on both days, over 170 actions were held in every state across the country, in cities and towns both large and small, with tens of thousands if not more participating in total. Although opponents of equality posture as defenders of "family values," the protests of the last few days have clearly shown that the majority of people support equal rights for LGBT people and a great many are willing to stand up and fight for it.

Below are reports detailing just some of the actions ANSWER Coalition members and supporters participated in. The ANSWER Coalition fully supports the demand to repeal DOMA and federally guarantee marriage equality.

More than 200 people, many wearing red, gathered at the Federal Courthouse in Albuquerque to support same-sex marriage on March 27. People listened to many speakers that ranged from a reverend, who is willing to do ceremonies for same-sex couples, politicians who showed support and community leaders in the LGBT movement. Speakers acknowledged the advances already made towards equality and acknowledged the battle ahead to gain equal rights and keep them. One couple spoke about the challenges of being able to be legally married in a handful of states but not having their marriages recognized by other states or the federal government.

Between speakers, the crowd was energized with chants that were lead by Brittney Arneson of GetEqual. “What do we want? Equality! When do we want it? Now!” was ringing through the downtown area. Around dusk, candles were lit and there was a moment of silence. People were asked to think of the people of the LGBT community who are harassed and, as a result, committed suicide. After there was a short video that people were welcomed to stay and watch on a projector.

A multitude of rainbow flags waved in the wind as almost 400 people from Chicago’s LGBT community and their allies united at Federal Plaza in Chicago’s Loop to demand federal marriage equality on March 25.  After speakers from various parts of the movement rallied the crowd, the people took to the streets and marched north up State Street and followed Wacker Drive to the Tribune Tower. The crowd, including activists from the Gay Liberation Network (GLN) and Women Organized to Resist and Defend (WORD), militantly chanted “What do we want? Equal rights! When do we want them? Now!” and “LGBT! We demand equality!” The LGBT community and progressives in Chicago stand hand in hand with those struggling all over the country for full marriage equality under federal law.

Thousands of demonstrators have been holding nearly non-stop actions outside the Supreme Court as lawyers presented arguments on Proposition 8 and the Defense of Marriage Acts. While groups of bigots also demonstrated, they were vastly outnumbered by supporters of equality. Protestors were passionate and hopeful that the LGBT movement would win a major victory. People had traveled from across the country to participate.

Those gathered outside closely followed news about the proceedings inside. The lawyers supporting the bigoted Proposition 8 and sympathetic Supreme Court justices made outrageous and nonsensical arguments against marriage equality. Samuel Alito, for instance, premised his support for Prop 8 on the basis that same-sex marriage is "newer than cell phones or the internet." Many other justices, however, felt the pressure from the mass movement and pushed back, especially the next day when the DOMA hearings began.

Thousands of people gathered in the Castro District and then marched to City Hall for a rally in support of same-sex marriage equality on March 25. The action was in anticipation of two court cases to be heard by the U.S. Supreme Court the next day. On the court's docket was opening arguments on overturning two anti-LGBT statutes, Proposition 8, a referendum passed in California in 2008 and the Defense of Marriage Act, a federal law signed by President Clinton in 1996. Both these statutes restricted the definition of marriage to be only between a man and a woman.

The feeling in the crowd was one of impending victory as the chant "The time is now" could be heard echoing throughout the march. People carried signs saying "I do" and "We all deserve the freedom to marry." People along the route of the march on the street and in their homes and cars honked and showed solidarity with the march as it moved down Market Street to the Civic Center.

Speakers at the rally included Daniel Martinez-Leffew, a 12-year-old who was adopted by two gay men. Martinez-Leffew wrote a letter to Chief Justice John Robert, who himself adopted children, telling him what upholding Prop 8 would mean. To the cheers of the crowd, he read, "If Prop 8 is allowed to stand, imagine the pain we would feel knowing that we are not considered equal to everyone else." Among other issues raised at the rally was how important same-sex marriage rights would be to bi-national same-sex couples who not only are denied marriage rights, but are also not allowed to be together because bigoted immigration policy does not recognize their relationship.

While progressive people are expecting the Court to affirm what the majority of people in the United States believe, that LGBT people should have the rights to marry, people were out in the streets to make sure the Court felt the will of the community.