Actions across the United States demand: "Free the Cuban Five!" 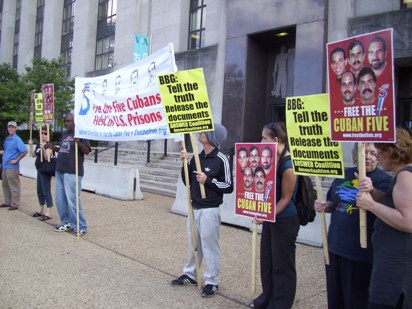 Protest in front of the headquarters of the Broadcasting Board of Governors (BBG), Washington, D.C.

Demonstrations across the United States in the past few days called for the immediate freedom for the Cuban Five on the occasion of the 12th anniversary of their unjust imprisonment in the United States. The actions also demanded the granting of visas to Olga Salanueva and Adriana Pérez, the wives of René González and Gerardo Hernández, who have been cruelly denied permission to visit their husbands for the entire 12 years, as well as the extradition of Luis Posada Carriles, wanted in Venezuela for the murder of 73 people aboard a Cubana Airliner.

In San Francisco, people picketed, leafletted and collected petition signatures on a busy downtown street corner. Gloria La Riva, coordinator of the National Committee to Free the Cuban Five, spoke about the injustice being done to the Five, and announced a new initiative to raise funds for a full-page ad in the Washington Post, directed at President Obama and calling for the immediate release of the Five. Toya Fernandes of the Bay Area Latin American Solidarity Coalition (BALASC) talked about the extensive support for the Five across Latin America. Rosa Peñate, speaking for the Bay Area FMLN, spoke about the families involved. Richard Becker of the ANSWER Coalition expressed outrage at the fact that the anti-Cuban terrorists and murderers walk free in Miami, protected by the U.S. government, while the Cuban Five remain in prison. The event was co-sponsored by the National Committee to Free the Cuban Five, ANSWER, BALASC and the FMLN.

Braving the rain, Cuban Five supporters in New York City came out to commemorate the arrests of the Five and to inform the public at large of the case and why the Obama administration should free them immediately. The event was co-sponsored by ANSWER, the July 26 Coalition and Casa de las Americas. Three beautiful banners portraying the Five were on display and hundreds of leaflets were distributed. Speakers included representatives from the sponsoring organizations as well as IFCO/Pastors for Peace, who spoke in memory of Rev. Lucius Walker. The action was part of the national days of action called by the ANSWER Coalition and the National Committee to Free the Cuban Five, and also part of a full month of Cuban Five activity in New York City.

Over 40 people came out to picket and leaflet for the Cuban 5 in Chicago in front of the Federal building in the busy downtown area. Over 1,000 leaflets on the struggle to free the 5 were passed out. Waving Cuban flags and holding placards that read, "Free the Cuban Five Now!", picketeers chanted: "Justice for the Five!" Supporters spoke out on the need to spread the word about the case of the Cuban 5 and build the struggle in soldarity with revolutionary Cuba. Speakers also remembered Cuba solidarity activist Rev. Lucius Walker and vowed to carry on the struggle to support Cuba that was so central to his life. Endorsers included the National Committee to Free the Five, ANSWER Chicago, Chicago Committee to Free the Cuban 5, La Voz de los de Abajo, Mexico Solidarity Network, Nicaragua Solidarity Committee - Chicago, Party for Socialism and Liberation and Socialist Workers Party.

In Washington, D.C., a protest took place in front of the headquarters of the Broadcasting Board of Governors (BBG). The National Committee to Free the Cuban Five, under the Freedom of Information Act, submitted a request to the BBG seeking public disclosure of the BBG's funding of journalists who published materials about the Cuban Five and Cuba. The BBG is prohibited by law from funding domestic propaganda and attempting to influence U.S. opinion, yet has apparently been funding journalists who place stories in domestic media outlets. The D.C. protest was sponsored by the ANSWER Coalition and the National Committee to Free the Cuban Five.

A table set up by supporters of the Five in front of the Student Union at the University of New Mexico in Albuquerque with a banner and placards drew a great response, allowing many students to learn about the case of the Five during the course of the day. More than 500 leaflets were distributed and 50 signatures gathered on a petition to free the Five. At 5 PM a demonstration at the gates of the campus also got a great response from passers-by, with another 200 leaflets distributed, more signatures gathered, and passing cars honking in solidarity. The militant demonstration was attended by members of American Indian Movement, Jericho Movement, and Veterans for Peace, as well as students who had just learned about the Five earlier in the day.

In nearby Long Beach, CA, Cuba Five supporters held a street meeting outside of the Long Beach City College campus, which quickly attracted the attention of many people driving by. Hundreds of fliers were handed out and signatures collected supporting the release of the five heroes. Passers-by within the diverse neighborhood received the message with honking horns and raised fists in solidarity as protesters spoke on a bullhorn.

Other actions sponsored by ANSWER and the National Committee took place in cities across the country, including Austin, Texas; Chicago, Illinois; Miami, Florida; Philadelphia, Pennsylvania, and Seattle, Washington.