The following article is reposted from Palestine in America. 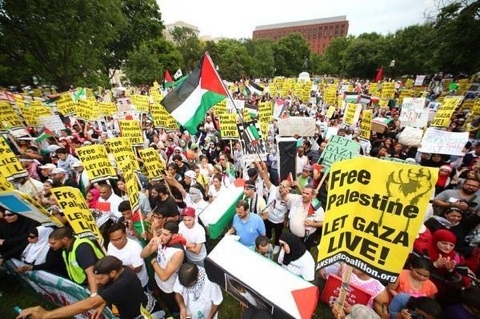 Al-Awda, the Palestinian Right to Return Coalition and Act Now to Stop War and End Racism Coalition (A.N.S.W.E.R.) are teaming up to hold a national march to support Palestine and protest the American Israel Public Affairs Committee (AIPAC) in Washington D.C. on March 20.

The rally will start at 12 p.m. at the White House, during the annual AIPAC convention. Protesters will then march to the Washington Convention Center, followed by a “very unique lineup” of speakers including Dr. Cornel West, Diana Buttu, Susan Abulhawa and Linda Sarsour. Entertainment featuring Doc Jazz, Nisreen Hajaj and Amer Zahr will follow the speakers.

“Over the past years, organizations have protested AIPAC for many different reasons. This year, Al-Awda wanted to make it evident that we’re not just protesting AIPAC, we’re supporting Palestine loud and clear,” Abbas Hamideh, co-founder of Al-Awda, told Palestine in America.

According to Abbas, the biggest challenge that the organizers of the protest have faced is trying to educate and mobilize people on the Palestinian cause, because they feel there is a negative connotation linked to the word Palestine.

The rally also has its own hashtag—#SupportPalestineInDC2016. Click here for more information.