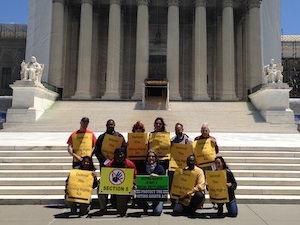 On May 25, the ANSWER Coalition (Act Now to Stop War and End Racism) joined in a multi-week effort led by Voices 4 Justice in defense of the Voting Rights Act in front of the Supreme Court. Voices 4 Justice, a local activist group in Washington, D.C., has been anchoring an effort to highlight the danger to the 1965 Voting Rights Act in a case currently before the court—Shelby v. Holder. What is at stake in this case is Section 5, which requires states with a history of discrimination to submit any changes to their voting laws to the Justice Department for a determination of whether they are discriminatory.

Section 5 protects Black voters in the southern United States from the imposition of clearly racist voting provisions such as poll taxes, literacy requirements and a myriad of other impediments used for years by these states to disenfranchise Black voters.

Chipping away at voting rights

Repealing Section 5 would have a seriously negative effect on Black voting in these states. In the past few election cycles, the wave of “voter ID” laws and other restrictive practices show that politicians and election officials around the country, including in the South, are chipping away at voting rights by erecting more and more barriers to participation. In the states subject to Section 5, those most likely to be affected by these increased burdens are Black voters.

Amicus briefs have been filed by states both subject and not subject to Section 5 supporting it being struck down. It is clear that for a range of reactionary officials, eliminating Section 5 is key to limiting legal challenges in the South and elsewhere to new election laws with discriminatory intent.

The ANSWER Coalition joined in the effort to hold weekly vigils in front of the Supreme Court in defense of Section 5. Other organizations that have participated so far include Black fraternities and sororities, civil rights organizations, Washington-area Black churches, and delegations that have come from Alabama. On May 25, ANSWER and Voices 4 Justice activists raised awareness of the issue amongst the thousands of tourists who descend on Washington, D.C., on a daily basis, building support for maintaining Section 5 from people all over the country.

Vigils will continue until June 16, during which time activists will have spoken and handed out literature to thousands of people from around the country on this crucial issue. The ANSWER Coalition will continue to participate in and mobilize for the efforts to protect the basic democratic rights of all people.