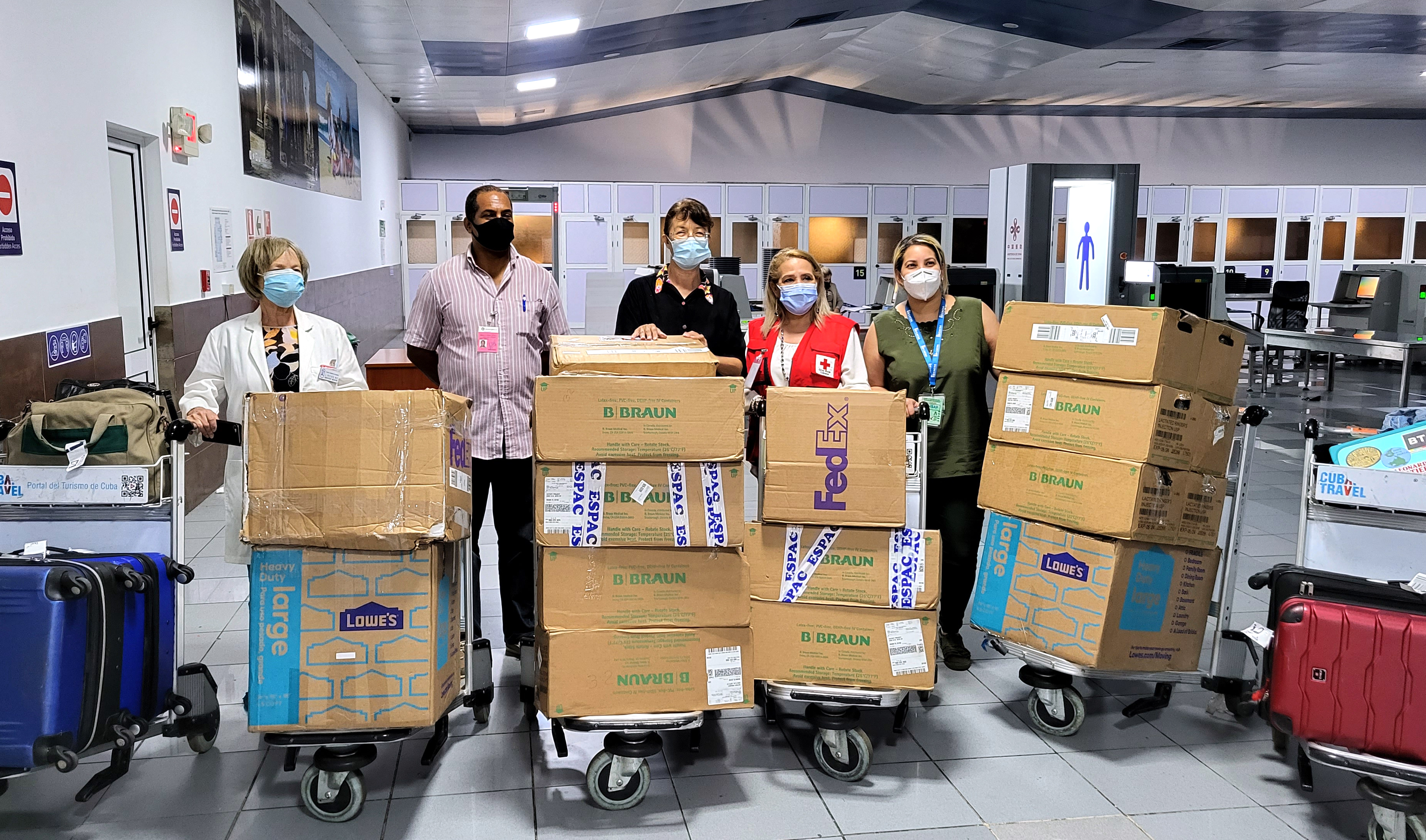 On Friday, August 26, activists with the Hatuey Project and ANSWER Coalition successfully delivered a shipment of medicines and equipment to help in the treatment of the people who suffered serious burns in the massive Supertanker oil fire in Matanzas, Cuba. Four tanks carrying millions of gallons of fuel were consumed by flames after a lightning strike, starting August 5. Hundreds of people were burned. Tragically, 14 firefighters died fighting the fire.

As soon as the giant fire became news, ANSWER and the Hatuey Project issued an emergency appeal for donations, together with other solidarity organizations anxious to extend material solidarity to Cuba. Venezuela and Mexico sent firefighters. Other countries have also offered substantial help. Dr. Nadia Marsh, a member of ANSWER, arrived in Cuba to join the delegation. Dr. Marsh and Dr. Villagómez Reeves provided the medical advice for the shipment and rallied colleagues to join the effort. Many supporters of ANSWER and Hatuey heard the call and donated to make this aid possible.

Arriving at the José Martí International Airport in Havana, Dr. Leni Villagómez Reeves and Gloria La Riva were met by officials of the Cuban Red Cross, the Ministry of Health, Medicuba and the Cuban Institute of Friendship with the Peoples, to receive the shipment. The Cuban Red Cross is the official recipient to work in the immediate distribution of the goods for the burn patients.

Among the medicines and equipment are 360 bags of Lactated Ringer’s Injection solution, 750 IV administration sets, 600 20g IV needle/catheters, 600 18g IV needle/catheters, 110 vials of Piperacillin/tazobactam antibiotics, 6,000 pairs of surgical gloves, 4 pounds of Mafenid ointment for more complex burns, 150 tubes Bacitracin, burn gauzes and rolls. Part of an earlier donation of Benadryl and vitamins by Hatuey were also directed for those patients.

Susana Llovet, Vice Secretary General of the Cuban Red Cross, said at the airport, “We truly appreciate this help of the Hatuey Project, ANSWER Coalition and all those who mobilized and donated to make this possible. All these medications are going to help the Cuban people, especially those patients who suffered burns after the Supertanker fire.”

Weighing heavily on Cuba’s difficult recovery from the fire’s devastation, is the U.S. economic blockade of more than 60 years. Gloria La Riva, Hatuey Project coordinator, says that to bring prescription medications to Cuba, the U.S. government requires an export license from the Commerce Department. Otherwise such essential goods are prohibited.

“It is an extremely complicated process to apply and practically the whole U.S. government apparatus is involved. The State Department and Defense Department have to review and approve the license application.”

This of course has the effect of greatly slowing down or blocking material aid to Cuba. One of the biggest obstacles in Cuba’s ability to trade with the world or to receive humanitarian aid is the U.S. outrageous and unwarranted designation of Cuba as a “state sponsor of terrorism.”

Brian Becker, director of ANSWER, says, “There is absolutely no justification for the state sponsor label to be hung on Cuba. In fact, Cuba has been the victim of U.S.-sponsored, documented acts of terrorism since 1959. Such a false label severely hampers Cuba’s ability to provide for its people and we demand that this false designation be lifted immediately by the Biden administration, and for the blockade to end as well.”

As Dr. Villagómez Reeves stated so well, “For Hatuey Project, we are humbly trying to emulate the Cuban people’s example of solidarity and internationalism. We brought antibiotics and burn supplies of the most modern and wonderful variety. The reason that Cuba needs help is precisely because of the U.S. blockade that has been intensified during the COVID pandemic.”

Despite the obstacles, because of the emergency nature in Matanzas, Hatuey Project received the export license on August 24. The meds were on the ground in Cuba on the 26th.

During the initial hours of Dr. Nadia Marsh’s arrival in Havana, she interviewed several people about the impact of the U.S. blockade. One man, Yacen, a dialysis patient, spoke passionately about how the blockade makes receiving regular dialysis treatments a daily struggle because of the lack of reagents. He is on the list for a kidney transplant but said, "Since anti-rejection medications are needed for life, and they are produced in the U.S., they are not available. So transplants are suspended for now." He commended the dedication and commitment of the Cuban doctors who have saved his life.