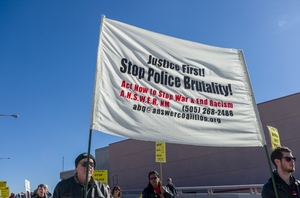 Protesters gathered on Sept. 17 to demand justice for two victims of police brutality in Albuquerque. The incident was caught on a video that went viral across the country. It shows Albuquerque police officer Connor Rice and another officer pursuing two men suspected of possessing marijuana.

The officers, with no warrant, kicked in the door of the house where the men had fled, immediately tasering one man then tasering him again. The other man tried to flee and ran out the back door with Rice in pursuit. The video shows the man lying on the ground shouting "I surrender! I surrender" while Officer Rice handcuffed and kicked him in the head, grinding his neck into the ground with his boot while shouting and screaming.

Despite of the graphic video, a jury found Rice not guilty of using excessive force. This was a shock to the entire community. The Albuquerque branch of the ANSWER Coalition called an emergency demonstration at the police headquarters. In less than 48 hours, activists and families of others killed and brutalized by the Albuquerque Police Department joined the protest.

"This is yet another incident in a long string of incidents involving APD brutality," said Joel Gallegos, ANSWER NM organizer. "We are here today to let the cops and the mayor know that we will not stand by while APD officers commit crimes of murder and brutality against the people."