ALICE WALKER: Sister Assata: This Is What American History Looks Like 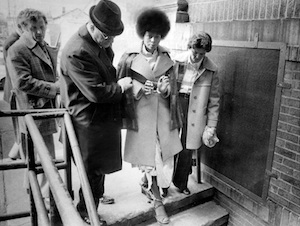 The following was previously published on Alice Walker's official website

I don’t know why, given where we are with dronefare, but I didn’t expect the man making the announcement about Assata Shakur being the first woman “terrorist” to appear on the FBI’s most wanted list to be black. That was a blow. I was reminded of the world of “trackers” we sometimes get glimpses of in history books and old movies on TV. In Australia the tracker who hunts down other aboriginals who have, because of the rape and murder, genocide and enslavement of the indigenous (aboriginal) people, run away into the outback. He shows up again in cowboy and Indian films: jogging along in the hot sun, way ahead of the white men on horseback, bending on his knees to get a better look at a bruised leaf or a bent twig, while they curse and spit and complain about how long he’s taking to come up with a clue. And then there were the “trackers” who helped the pattyrollers during our four hundred years of enslavement. When pattyrollers (or patrols) caught run-away slaves in those days they frequently beat them to death. I’ve often thought of the black men whose expertise at tracking fugitives helped bring these terrors, humiliations and deaths about. When I was younger I would have been in a rage against them; not understanding the reality of invisible coercion, and mind and spirit control, that I do now. Today, only a few years older than Assata Shakur, and marveling at the unenviable state of humanity’s character worldwide, I find I can only pray for all of us. That we should be sinking even below the abysmal standard early “trackers” have set for us: that the US government can now offer two million dollars for the capture of a very small, not young, black woman who was brutally abused, even shot, over three decades ago, as if we don’t need that money to buy people food, clothes, medicine, and decent places to live.

What is most distressing about the times we live in, in my view, is our ever accelerating tolerance for cruelty. Prisoners held indefinitely in orange suits, hooded, chained and on their knees. Like the hunger strikers of Guantanamo, I would certainly prefer death to this. People shot and bombed from planes they never see until it is too late to get up from the table or place the baby under the bed. Poor people terrorized daily, driven insane really, from fear. People on the streets with no food and no place to sleep. People under bridges everywhere you go, holding out their desperate signs: a recent one held by a very young man, perhaps a veteran, under my local bridge: I Want To Live. But nothing seems as cruel to me as this: that our big, muscular, macho country would go after so tiny a woman as Assata who is given sanctuary in a country smaller than many of our states.

The first time I met Assata Shakur we talked for a long time. We were in Havana, where I had gone with a delegation to offer humanitarian aid during Cuba’s “special period” of hunger and despair, and I’d wanted to hear her side of the story from her. She described the incident with the New Jersey Highway Patrol, and assured me she was shot up so badly that even if she’d wanted to, she would not have been able to fire a gun. Though shot in the back (with her arms raised), she managed to live through two years of solitary confinement, in a men’s prison, chained to her bed. Then, in what must surely have been a miraculous coming together of people of courageous compassion, she was helped to escape and to find refuge in Cuba. One of the people who helped Assata escape, a white radical named Marilyn Buck, was kept in prison for thirty years and released only one month before her death from uterine cancer. She was a poet, and I have been reading her book, Inside/Out, Selected Poems, which a friend gave me just last week. There is also a remarkable video of her, shot in prison, that I highly recommend.

The second time I saw Assata, years later, I was in Havana for the Havana Book Fair. Cuba has a very high literacy rate, thanks to the Cuban revolution, and my novel, Meridian, had recently been translated and published there. However, this time we did not talk about the past. We talked about meditation. Seeing her interest, and that of Ricardo Alarcon, president of the Cuban National Assembly, and others, I decided to offer a class. There under a large tree off a quiet street in Havana, I demonstrated my own practice of meditation to some of the most attentive students I have ever encountered. The mantra: Breathing in: “In,” breathing out: “Peace.”

I believe Assata Shakur to be a good and decent, a kind and compassionate person. True revolutionaries often are. Physically she is beautiful, and her spirit is also. She appears to hold the respect, love and friendship of all the people who surround her. Like Marilyn Buck they have risked much for her freedom, and appear to believe her version of the story as I do.

That she did not wish to live as an imprisoned creature and a slave is understood.

What to do? Since we are not, in fact, helpless. Nor are we ever alone.

I call on the Ancestors
by whose blood
and DNA
we exist
to accompany us
as always
through this lengthening
sorrow.
And to bear witness
within us
to all that we are
aware.