The following announcement was originally circulated by the National Committee to Free the Cuban Five. The ANSWER Coalition is proud to be a partner in this exciting new initiative. 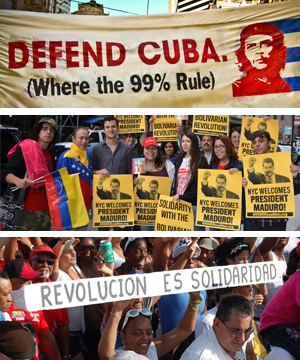 To our friends and supporters:

The National Committee to Free the Cuban Five, together with thousands of organizations and individuals worldwide, struggled for the freedom of Cuba's Five Heroes for more than 13 years.

That worldwide struggle ended successfully with their freedom finally won. Gerardo Hernández, Ramón Labañino, Antonio Guerrero, Fernando González and René González were a shining example, resisting more than 16 years with determination to defend their homeland and justice. They are home in Cuba enjoying freedom with their families and people.

Our National Committee's campaign for the Five's freedom ended on Dec. 17, but the fight for justice is not over.

We are transforming to form a new organization. The National Committee to Free the Cuban Five and the ANSWER Coalition are happy to announce the initiation of the Cuba and Venezuela Solidarity Committee.

The mission of the organization is to build solidarity and support for Cuba and Venezuela in the United States, with:

Cuba and Venezuela play an essential role in the new process of Latin American and Caribbean countries' unity, defense of their independence and sovereignty, and the right to economic and social self-determination.

The ideals of economic and social integration embodied in ALBA (Bolivarian Alliance for our Americas), CELAC (Community of Latin American and Caribbean States), UNASUR, MERCOSUR and other entities, were made possible by two main events. First, Cuba's Socialist Revolution and resistance for more than five decades against U.S. aggression. And second, the rise of Venezuela's Bolivarian Revolution and the development of ALBA as a model for future integration.

Despite a crushing blockade, Cuba has built a remarkable society at the same time that they have extended selfless internationalist missions. Cubans have saved hundreds of thousands of lives worldwide with medical care, wiped out illiteracy in several countries, and volunteered militarily to defend Angola and help bring down South African apartheid.

The Bolivarian Revolution has brought unprecedented progress for the Venezuelan people, something inconceivable less than 20 years ago. The people have become the shapers of their own destiny, with 18 democratic referenda and a Constitution guaranteeing the right to housing, healthcare and education.

We salute the progress being made in other countries in the region as well, notably Bolivia, Ecuador and Nicaragua. Those changes are also under threat by Washington and our Committee defends them from U.S. subversion and aggression, as we defend Cuba and Venezuela.

Notwithstanding the U.S. change in some tactics toward Latin America, its objective of regaining political and economic domination in the region remains the same.

As people of the United States, we have a responsibility to oppose U.S. aggression, interference and intervention, coups and destabilization against other peoples. More than ever, solidarity is critically important.

We welcome your participation in the Cuba and Venezuela Solidarity Committee. Contact us today!

The Cuba and Venezuela Solidarity Committee

The Cuba and Venezuela Solidarity Committee

A Call for International Solidarity with Venezuela!

On Sunday, December 6, National Assembly elections will be held in Venezuela.

We urge activists to organize support rallies -- from Dec. 4 to Dec. 6 -- to defend the Bolivarian Revolution and the constitutionally elected government of President Nicolás Maduro, and to demand an end to U.S. government and media destabilization campaigns. Send information on your event, we'll spread the word!