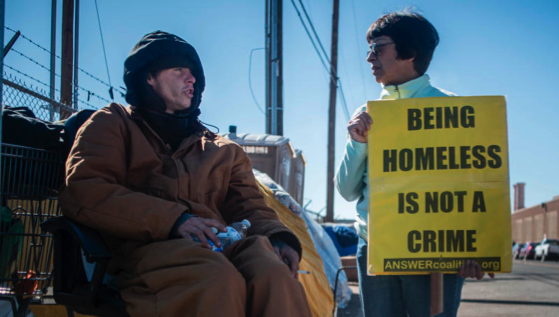 The ACLU of New Mexico and Goodwin Procter LLP have filed a lawsuit against the city government of Albuquerque over a cruel and unconstitutional ordinance that criminalizes the homeless and threatens the right to free speech by prohibiting interactions between drivers and pedestrians along medians and freeway entrances and exits.

The ACLU press release describes ANSWER activist Marissa Sanchez: "The ACLU of New Mexico’s final plaintiff is Marissa Elyse Sanchez, an Albuquerque resident who is extensively involved in political activism with the Act Now to Stop War and End Racism (ANSWER) coalition. Sanchez regularly holds political signs at medians and distributes political literature to occupants of vehicles stopped at red lights, activities which are now prohibited under the new ordinance."

The ANSWER Coalition is proud to be part of this lawsuit, and will continue its work fighting against attack on the homeless and demanding housing for all as a guaranteed right.