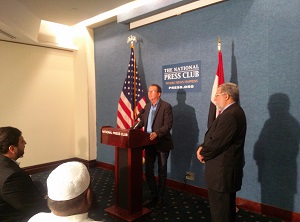 “Egyptian soldiers may be the ones pulling the trigger but the bullets and guns are paid for by the government in Washington,” states Brian Becker, National Coordinator of the ANSWER Coalition. 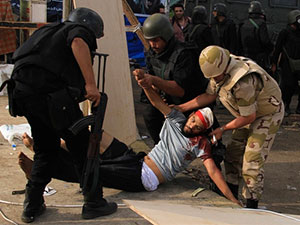 The following statement was presented by Brian Becker, National Coordinator of the ANSWER Coalition, at a press conference in Washington, D.C., on Aug. 14 in response to the massacre in Egypt.

The ANSWER Coalition condemns the massacres carried out by Egyptian security forces in Cairo today and demands an immediate end to the $1.3 billion in annual U.S. aid to the Egyptian military, which is now ruling the country. According to official estimates, nearly 300 people were killed today and more than 1,400 were wounded, most of them civilians. We express our solidarity with the Egyptian people, who have inspired the world with their great struggle over the past two and a half years.

While the Obama administration may issue hollow statements opposing the repression, much of the weaponry used today came from the United States, just as was the case in the long years of the Mubarak dictatorship.

The Egyptian Revolution that began in January 2011 has gone through many phases. After the downfall of Mubarak in February 2011, the Supreme Council of the Armed Forces (SCAF) became the de facto rulers. But the Egyptian people continued the struggle demanding an end to military rule, leading to elections. After Mohammed Morsi was elected president in June 2012, his policies included continuing neo-liberal economic policies, reactionary social policies, and continued cooperation with Israel and the United States against the Palestinian people. We disagreed with Morsi’s economic and social policies, and we disagreed with his orientation supporting the foreign-backed armed struggle in Syria.

On June 30, millions of people took to the streets opposing the Morsi government and its policies. The opposition was eclectic. It included progressives, socialists, liberals and some former elements of the Mubarak regime. The military, led by General al-Sisi, seized upon this mass outpouring to project itself as the “savior of the nation,” and became the effective ruling power. In reality, the brutal repression carried out by the state security forces over the past six weeks endangers the future of Egypt and could lead to even more tragic consequences for the Egyptian people and the Arab people as a whole.

Nowhere in the Middle East has the United States played anything but a destructive and reactionary role over the past 70 years. The aim of the Obama administration is the same as that of all of its predecessors – Democrat and Republican alike since the end of World War II – domination of the entire region.

We in the anti-war and people’s movement here demand an end to U.S. military aid to Egypt, and of course to Israel as well, and for an end to all forms of U.S. intervention in the Middle East.