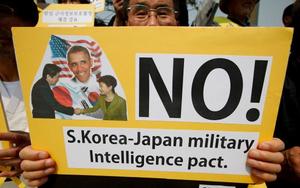 On May 3-4, anti-war organizations from across Asia gathered for the 17th Campaign Coordinating Body meeting of the Asia Wide Campaign. AWC was founded in 1996 in Japan, and now includes anti-war groups in countries throughout East Asia that are committed to fighting U.S. and Japanese imperialism. The CCB is the main deliberative and decision-making body of the AWC, to which the ANSWER Coalition regularly sends representatives.

The ANSWER Coalition – U.S. extends to all of the member organizations of the Asia Wide Campaign our greetings of solidarity.

This year’s meeting could not be taking place at a more important time.

President Obama’s recent trip to Japan, South Korea, Malaysia and the Philippines, and his implementation of the so-called “pivot to Asia” has the purpose of isolating China, threatening North Korea, and reaffirming U.S. military and economic dominance in the region, including shoring up its military relationships and reaffirming the semi-colonial status of the Philippines.

Japan is central to the “Asia pivot.” Very significantly, President Obama has now stated that that the Japan-U.S. Security Treaty extends to the disputed islands, thus reinforcing and even accelerating the confrontational position of the Abe government. He also gave support to Japan's exercise of the right of collective self-defense, the code for the deployment of the Japanese Self-Defense Forces abroad, also a military threat against China.

In a complete defiance of history, the United States portrays China as an imperial bully. Of course, we know that the true history of the relationship between China and Japan is one where Japan invaded, conquered and colonized China, and humiliated the Chinese people.

The U.S. relationship with Japan is about militarization but it is also about access to Japanese markets, resources and labor for the purpose of exploitation by U.S. corporations. It is only the mass opposition by Japanese farmers that has forced the Abe government to take a reserved position with regard to the Trans-Pacific Partnership Agreement (TPPA). Thus, the Obama administration failed in one of its chief goals of the trip.

In South Korea, of course President Obama continued his threats against and demonization of the Democratic People’s Republic of Korea, including the conducting of dangerous war exercises that simulate the invasion and bombing of the DPRK, including with the most advanced nuclear aircraft in the U.S. Airforce, and continually threatening even more economic sanctions.

The signing of the Agreement on Enhanced Defense Cooperation between the United States and the Philippines provides the U.S. military access to the Philippines beyond that which it has had since mass protests evicted it from the Clark Air Base and Subic Bay Naval Base 23 years ago.

These are critical developments that our movement must analyze and to which we must mobilize a response. We salute the organizations who are gathered here who organized protests prior to and during the trip in Japan, the Philippines and here in South Korea, and who are continuing to organize against the plans of U.S. and Japanese imperialism.

These developments show the need to strengthen ties between the anti-war and social justice movements in the United States and Asia, and to deepen our solidarity and coordination as the U.S. government further works to isolate China economically and militarily, threaten North Korea and further militarize the Asia-Pacific in the interest of the Pentagon, U.S. corporations and banks.