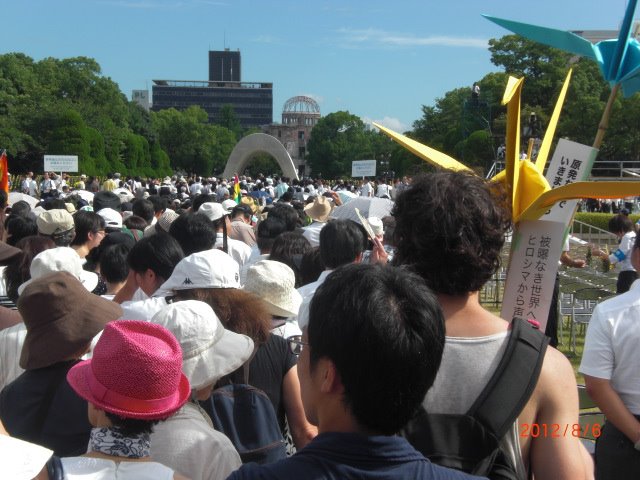 Hiroshima Peace Park on August 6, 2012, for the commemoration of the anniversary of the U.S. bombing on Hiroshima

The following statement was prepared by the ANSWER Coalition at the request of AWC-Japan, who along with the Association for the Second Generation of Atomic-Bomb Victims and other organizations, organize an annual anti-nuke rally in Hiroshima, Japan.

Today — August 6, 2015 — people across the globe are gathering to mark the 70th anniversary of the world’s first nuclear attack.

We want to thank you, our sisters and brothers, in the AWC-Japan, the Association for the Second Generation of Atomic-Bomb Victims and the other organizations who organize this event each year.

On this day in 1945, the U.S. military dropped an atomic bomb on Hiroshima, instantly killing over 140,000 people and severely injuring tens of thousands more. Three days later, a second bomb would kill an additional 70,000 in Nagasaki.

Contrary to the story told in U.S. textbooks, the bombs were not dropped to save American lives but rather to display U.S. military power as a threat to the Soviet Union and the world. The ghastly attack was integral to the wider U.S. strategy of global dominance.

The U.S. government has established the most substantial military empire the world has ever known. The Pentagon maintains nearly 10,000 nuclear warheads and performs an unknown number of test launches with the most advanced military weaponry in the world. But these are not mere tests. With this military might, the United States is the only country to ever drop nuclear weapons, and subsequently has launched war of aggression after war of aggression, illegal covert action after illegal covert action.

The ANSWER Coalition has brought hundreds of thousands of people into the streets of the United States over the past 14 years to oppose U.S. invasions, occupations and threats of war. Today, we are participating in events in many U.S. cities to mark this day and condemn U.S. militarism.

The ANSWER Coalition supports the demands being made at today’s rally in Hiroshima for compensation and medical care for victims of the attack and an apology to the victims and their descendants. We stand in solidarity with you and your demands in opposition to Japan’s nuclear armament, its construction of nuclear power plants, its new security bills, the U.S.-Japan military alliance and the reinforcement of U.S. bases in Japan; and for an apology and compensation for Japan’s war crimes in Asia.

We join your call for all U.S. troops out of Asia now! We call for an end to U.S. troop deployments and bases in Asia and worldwide, and stand firmly against U.S. war threats against North Korea and other countries.

We recognize the important work you are doing to oppose the Abe administration’s war drive and reactionary policies, and we pledge to continue our work to bring an end to the biggest threat to peace in the world: the U.S. government.